Thomas Mackeddie or Cameron and Margaret Ross of Brae and Rosefarm

text by Dr Jim Mackay; photography as annotated under each image

Five hundred years separate the two gravestones that are jammed up beside each other. The modern headstone stands right at the head of the eroded medieval cross with its superb dog’s tooth moulding. You might think there would be a clash of styles, but in fact they look rather well together. That medieval cross must have been lifted each time a member of the Mackeddie family was buried in the lair. 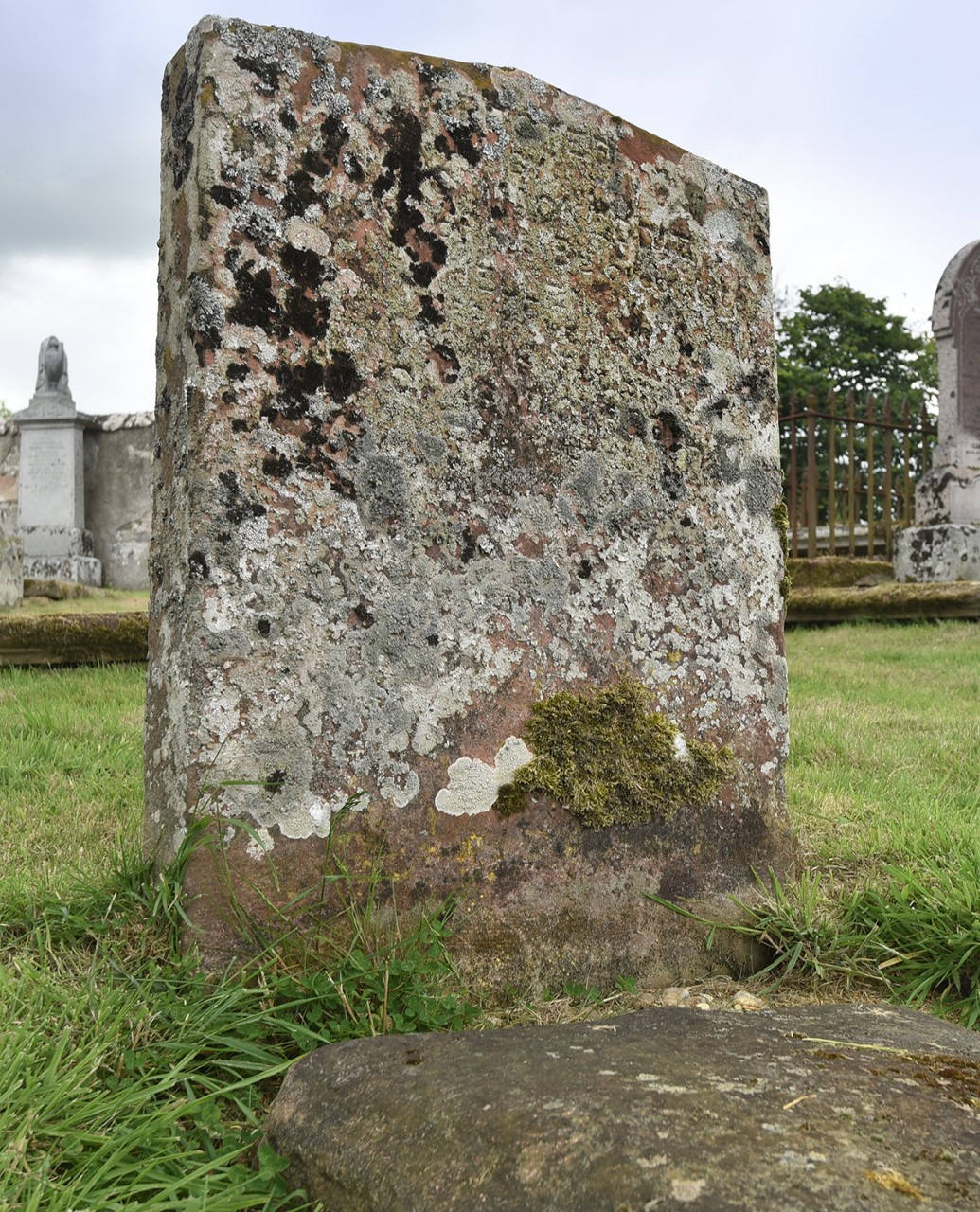 The headstone has a fine selection of lichens flourishing on it, requiring deployment of the Kirkmichael Lampie. It reads very simply:

Erected / by / JAMES MACKEDDIE, / in memory of his beloved sister / HELLEN / aged 26 years / And of his father / THOMAS MACKEDDIE / aged 67 years

The inscription ends with a large “1863” signifying as usual when the headstone was erected, in this case a couple of years after Thomas Mackeddie or Cameron had died. 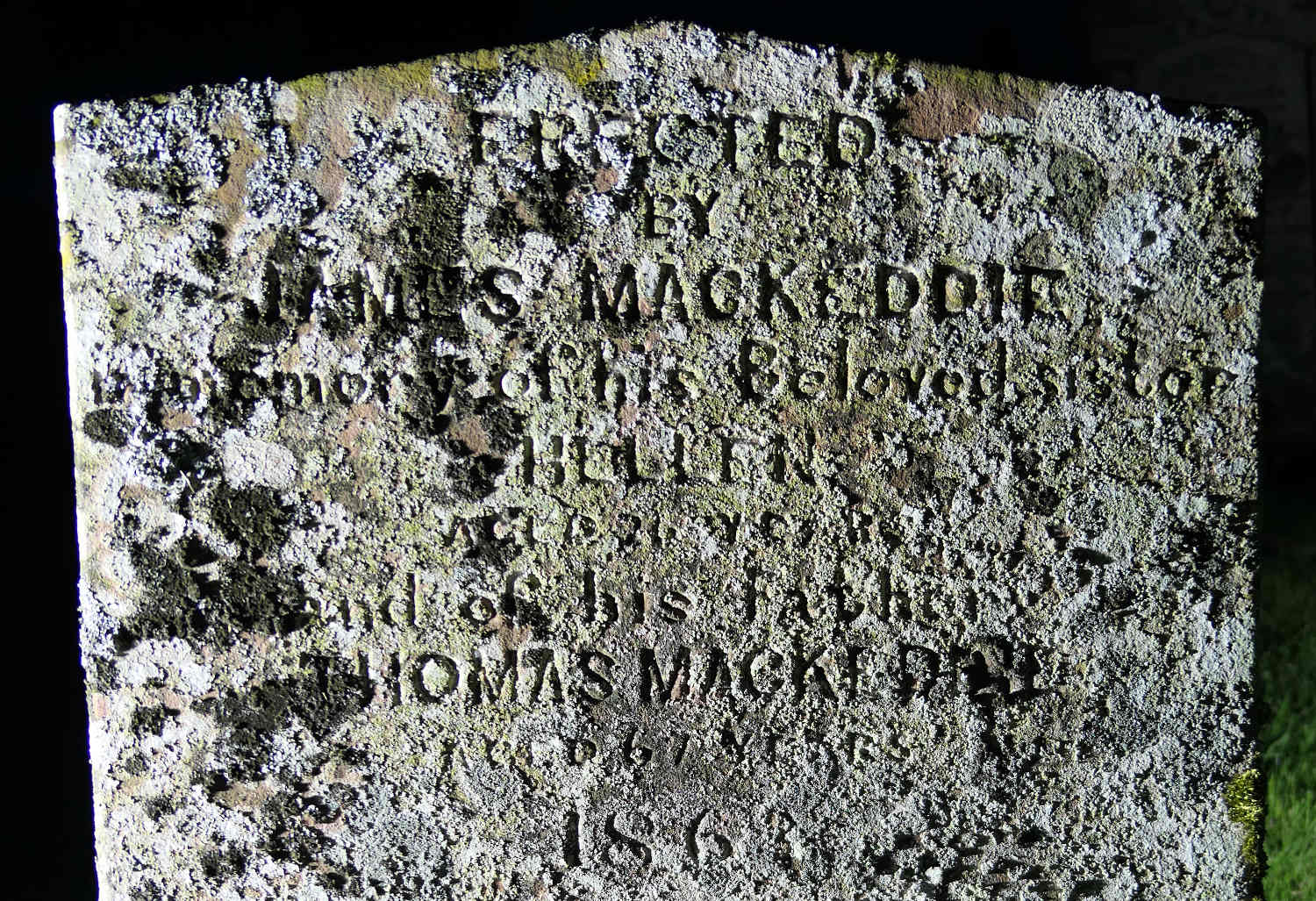 The Thomas Mackeddie stone at night; photo by Jim Mackay

Mackeddie or Cameron? Yes, the inevitable local alias surfaces with this family, although the preference seemed to vary with the period. In the 1700s Mackeddie was more common, in the early 1800s Cameron seemed the name of choice, and then it reverts to Mackeddie. Cameron was to the fore when Thomas and Margaret Ross married and their children were baptised:

A generation earlier, though, Mackeddie was the more common variant. These are the baptisms relating to his parents. Thomas’s father, like Thomas himself, was tenant in Brae, and you can see Thomas himself being baptised in 1796. We know from other documentation that it was Easter Brae where the family were farming. 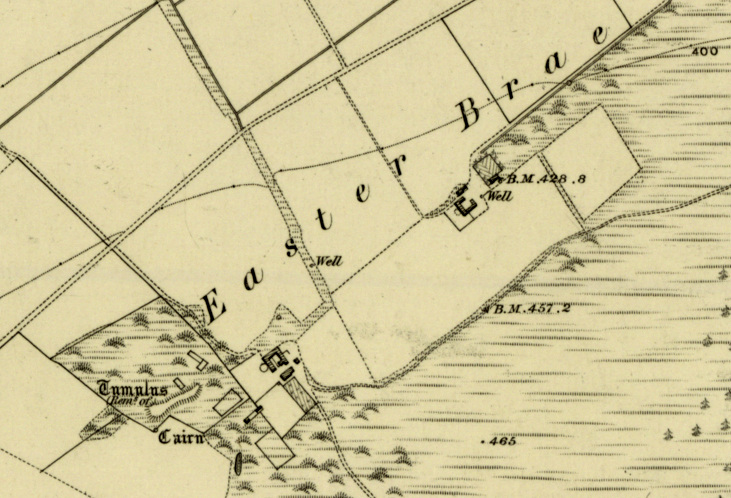 There were several holdings at Easter Brae

In the 1798 militia rolls, you’ll see that at Brae James Mackeddie is located close to another tenant farmer, Donald Ross. James’s son Thomas would in 1825 marry Donald’s daughter Margaret.

But Thomas Mackeddie would not be able to continue the tenancy at Brae following his father as he was falling deeper and deeper into arrears. Eventually the Newhall Estate pursued a group of tenants with legal action in order to get them to either pay up or be evicted. Newhall was continuously doing this, and you would think it would have been more sustainable and humane to set the rents to a level whereby tenants could make a success living off the land instead of screwing every last penny out of them before evicting them.

You’ll see that both these long-standing tenant families were being pursued for arrears, and in fact the Ross family was in far worse financial position. However, even for the Mackeddies there could simply be no way back from a burden of £57.5.- Sterling. Thomas held on at Brae for a few more years and then moved to become an agricultural labourer at Nielston on the Cromarty Estate a few miles to the east. He had been reduced in status from farmer to farm worker, and that is how he appears in the 1841 Census return:

You will note from this that neither of the sons baptised as Donald is present. I would assume that the first Donald had died in infancy. But the second Donald may have been farmed out, as was often the case. James, who would have the headstone erected in Kirkmichael, was present, aged ten and his sister Helen who would be commemorated on that headstone was now eight. A six-year old daughter, Margaret, had obviously not been captured in the baptism register. By 1851, the family had reverted to Mackeddie and all the children had flown the coop except young Helen.

Helen may already have been unwell, but she was to die of that dreaded wasting disease, tuberculosis or consumption, six years later.

Helen was thus buried in Kirkmichael, and the assumption must be that the family traditionally were buried there. When James had the inscription carved, he called Helen is “beloved sister” so clearly they must have been close in friendship even if he was not in the area physically.

By 1861, the family had moved the short distance west to the next farm of Rosefarm. Their household had gained another occupant, and there is a wee story behind that change. First: 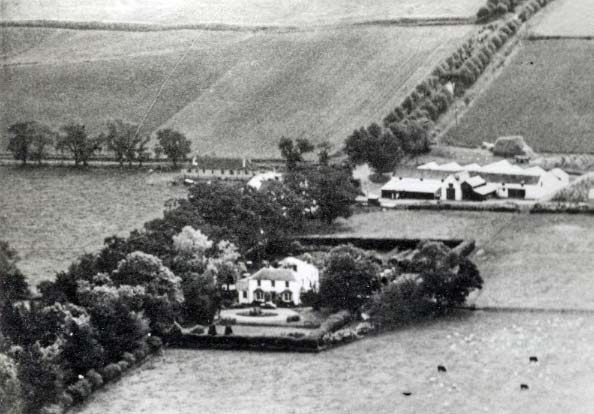 Rosefarm House, steading and farm cottages can all be seen on the Rosefarm road from this aerial shot from 1963, courtesy of Cromarty Image Library

Helen Ross, Margaret’s older sister, had continued to live at Brae where the family had been located, supported by parochial relief. She was a pauper. She had been first admitted to the poor’s roll back at the Parochial Board meeting of 5 November 1845 and was living rent-free at Brae. But the new tenant farmer at Brae was unsympathetic and at the meeting of 30 August 1852 there was bad news:

The Inspector submitted to the Meeting a letter from Mr. Alexr. McIntosh, Farmer, Brea, stating that unless the Board would pay the Rent of the House occupied by James MacLean and Helen Ross, two Paupers, he would dispossess them– The Meeting decline paying the Rent, on the grounds that Mr. McIntosh can easily obtain some work from the said Paupers as an equivalent for the House accommodation he furnishes to them.

We’ll come back to pauper Helen, but the wee family unit at Rosefarm was about to be devastated by a farm accident. Several newspapers reported it nationally, and this is from the Dundee Advertiser of 1 July 1861:

Accidents.– … Thomas Mackeddie, farm-servant at Davidston, was killed on Wednesday, by a cart passing over his chest.

It must have been a terrible shock to Margaret. Her nephew, Robert Ross, son of her carpenter brother William, went to the Registrar’s to inform him of the death.

You learn not to trust any single document when researching, and death certificates are riddled with omissions and errors, even when the informant is a family member. In this case either the Registrar or Robert Ross got the maiden name of Thomas Mackeddie’s mother wrong – it was Helen Murray not Helen Cameron. Possibly there was some confusion between the Registar and Robert over aliases!

Thomas, like daughter Helen before him, was buried in Kirkmichael, and two years later, in 1863, the headstone bearing that date was erected by son James Mackeddie. Now, where James had been since he had appeared in the 1841 census return at Nielston I have been unable to discover. I simply have found no trace of him, under either James Cameron or James Mackeddie, in Scotland at any point in time after 1841!

What happened to Margaret, the widow of the unfortunate Thomas? I don’t know if the Middletons, who farmed Davidston and several of the other farms in the area, let Margaret stay on at the farm cottage out of sympathy but she certainly resided there for at least another ten years. Initially she had company as her elderly unmarried sister, Helen Ross, as we have seen, had been forced out of her house at Brae and had come to reside with the Mackeddie family. But, as recorded on the Resolis Parochial record, she died in 1866:

The Cromarty register of deaths confirms that record of her death:

Margaret continued at Rosefarm for more than five years after the death of her sister, but finally left the parish of Cromarty altogether. She returned to her parish of birth, Resolis, to live with the family of her carpenter brother, William Ross, and his spouse, Mary Thomson. The family held a croft at Alness Ferry. Brother William died in 1876 and the three unmarried Ross children remained on the farm. I understand from information from my father that they may have also worked as masons.

The home of this Ross family at Alness Ferry was on the farmstead traditionally known as “Roddie’s” nowadays operated by my brother George. You can deduce this from tracking the known location of many of the families at Alness Ferry through the generations and census returns. Alternatively, you can short-circuit the process by reading my notes of what my father, Duncan Mackay (who was born in 1910) had to say when I asked him what he knew about Roddie’s!

There were Rosses in Roddie’s long ago – supposed to be masons. Then Jessuck, Jessuck’s brother Pipe Major Kenny Mackenzie – he was there but had tuberculosis. Rosses were old time residents here – not incomers like the others, including [Dad’s] grandfather. Other old-timers were the Murrays up there [the Corrie] and the Holms [Easter Alness Ferry] – very old. Not West Coasters. Roddie’s was named after Roddy Macrae from Ullapool. Donald’s [the farmstead known as “Donald’s”] was the brother’s. Mrs Macdonald Resolis Mains was the sister. Before Roddy Macrae was Willie Holm who was married to a Ross, sister of Ross in Newmills – used to call her Tutek (no idea why). [Dad] not aware of any connection between Willie Holm and other Holms. Then the laird sold the place to the highest bidder – it wasn’t crofters like here – [crofters had rights to first purchase] and Macdonald Resolis Mains bought it for his brother-in-law Roddy Macrae. He came from Loggie Lochbroom [near Ullapool]. He was far too old for the job and was no use. Didn’t get help from Donald as they didn't get on. Surprising they came to live so close, and perhaps Roddy regretted it. Donald would go on the booze and forget everything. Jockan’s was named after a Jockan Mackay who came in…

Three of the many former crofts and steadings of Alness Ferry; photo by Jim Mackay

Roddie’s appears in the background of a photo of the newly-erected war memorial from the early 1920s. That is the only image I have of it when folk lived in the crofthouse albeit the photo is very indistinct as the house is seen through some netting wire! Nowadays there is no residential element, all the former buildings having been incorporated within the modern steading.

Margaret thus appears in her final Census Return at that farmstead which would become “Roddie’s”.

the house as part of the farm steading nowadays; photo by Jim Mackay

Despite the number of children born into this Ross family, there were to be no progeny. I have rarely met a family which came to such a dead end. John, Alexander and Anne on the croft at Alness Ferry never married. Brother Robert Ross, the Jemimaville baker, married Margaret Junor but they had no children. Sister Janet Ross married William Hossack of Ardeville (and then Wellhead) as his second wife and inherited a gang of children but did not have any herself.

Margaret Mackeddie lived on with her nephews and niece for quite a number of years before passing away in 1889. Nephew Alexander Ross was the informant and all the information was correct.

I assume Margaret was buried in Kirkmichael with her husband, but there is no record of her on the family stone there. The Ross family are buried in Cullicudden, where they have a large sandstone headstone laced with biblical quotations:

The Mystery of James Mackeddie

The Mackeddie headstone at Kirkmichael is a good quality stone, carefully carved by a professional stone mason. It is one of the few headstones at the correct height within Kirkmichael – the mason put a line on these old headstones to show the depth to which they should be sunk, and it is spot on in this case. The undertaking must have cost a reasonable amount of money which suggests that son James Mackeddie was well-employed somewhere. But for now, where and what that employment was remains a mystery. 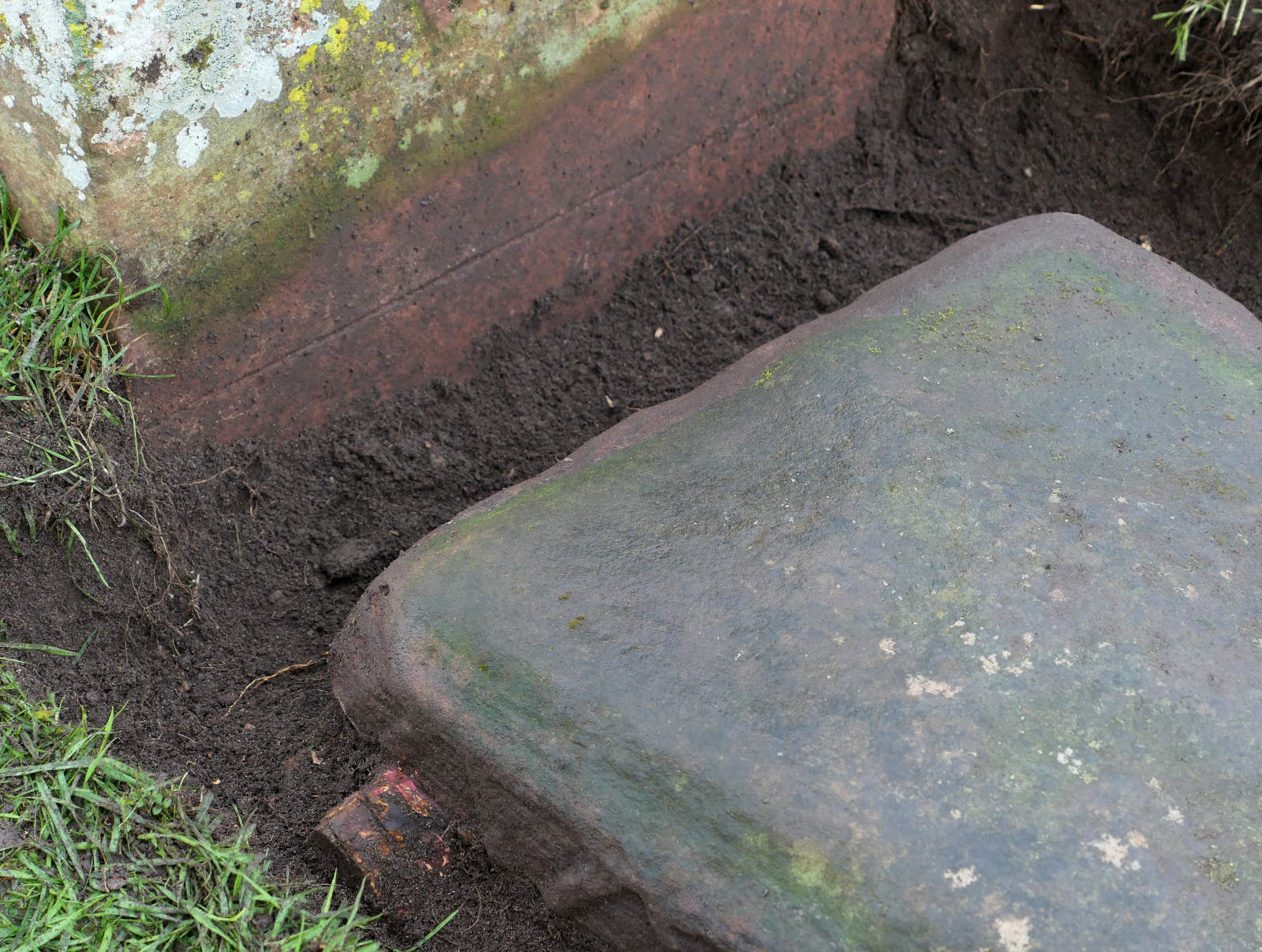 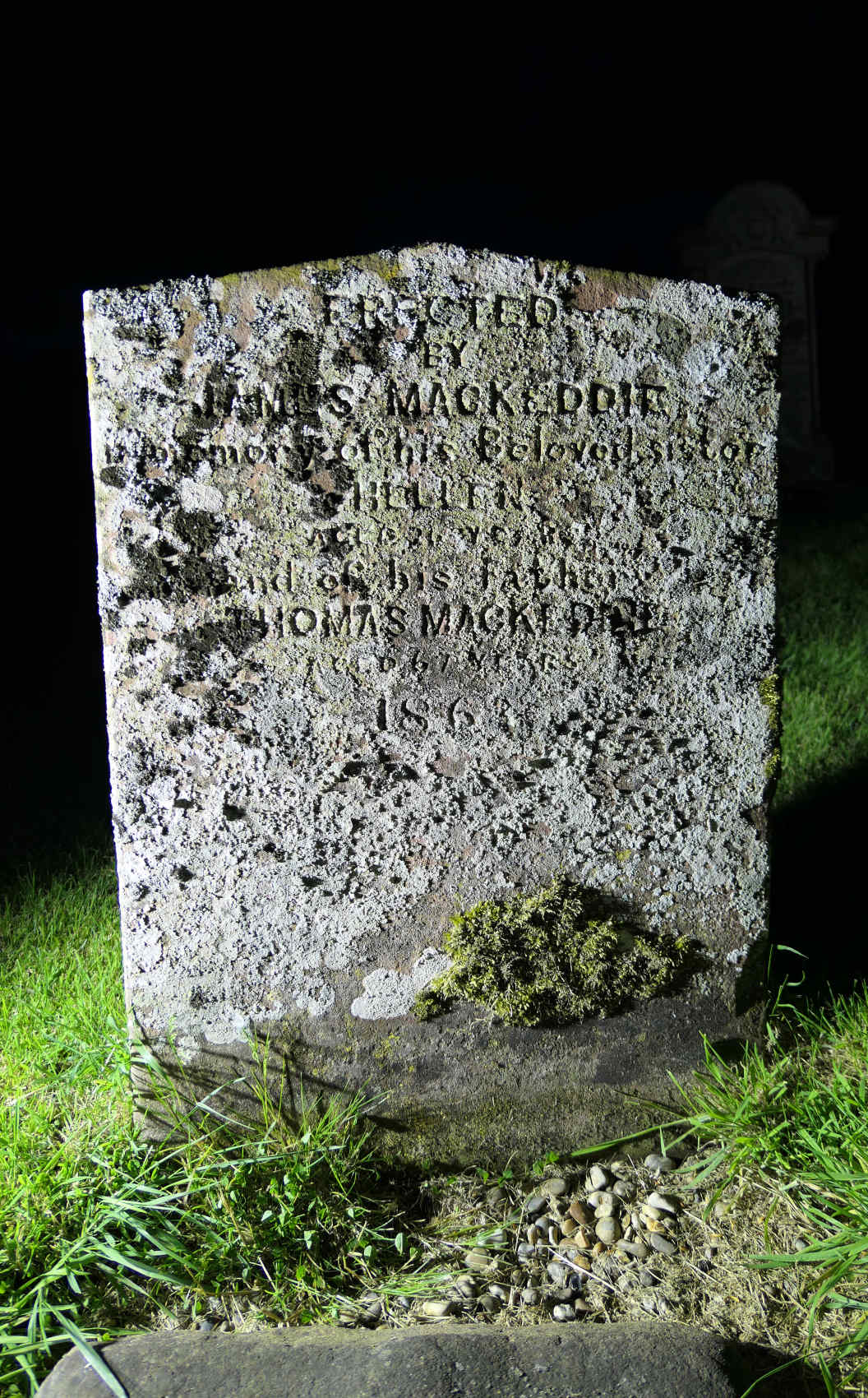 And what Story behind the Stone wouldn’t benefit from a simple family tree? I have restricted the relationships between the various family members to those identified in this story. There are other branches not shown – including totally spurious ones that can be found on the web…