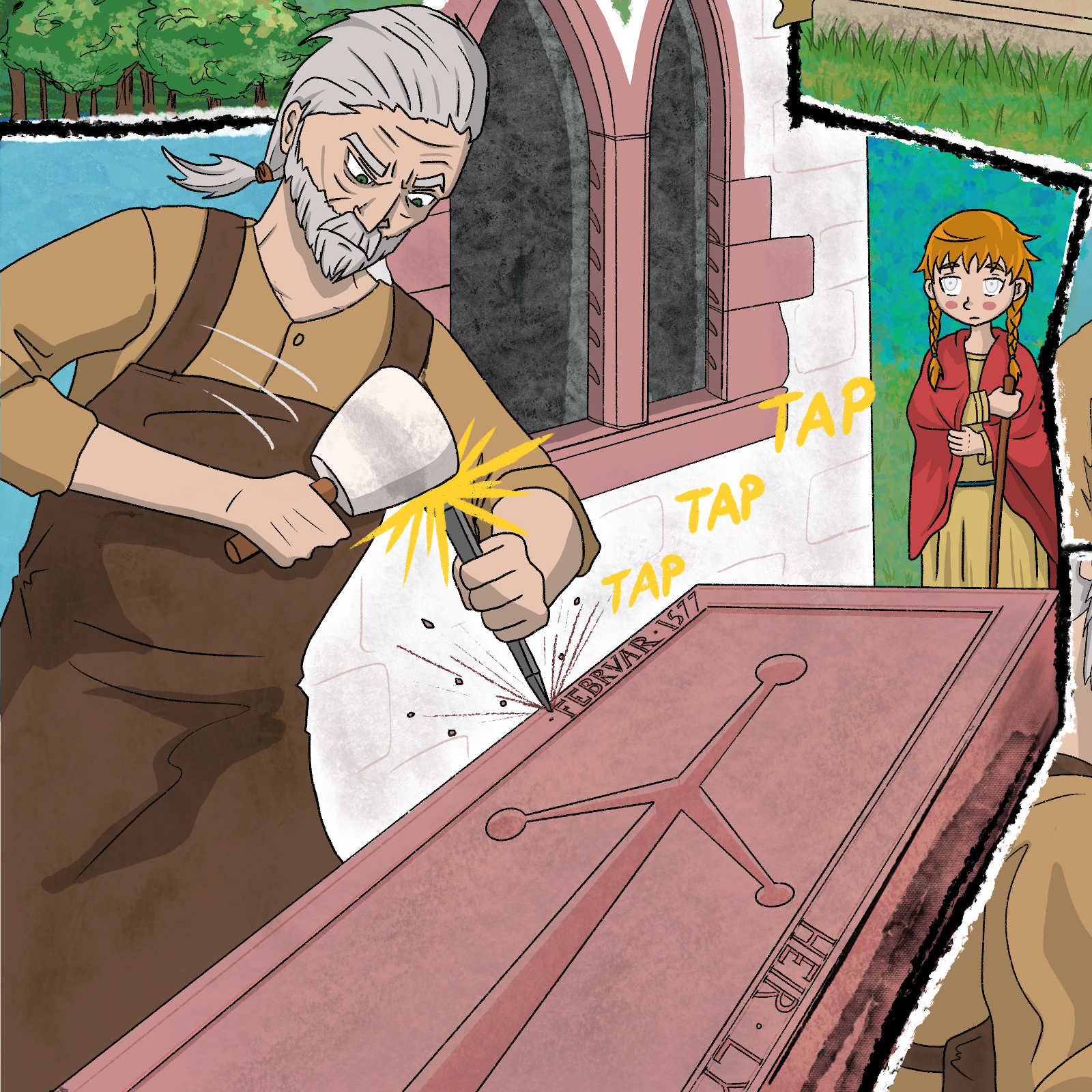 The oldest dated gravestone in the Black Isle? Protruding from the turf at the east chancel wall in Kirkmichael was a badly worn slab. As part of our recording programme, just before Christmas 2019 we lifted a wee fence off the stone, removed the turf and soil that covered much of it, and had a close look. There was a line of text around the perimeter and it looked suspiciously like it included the date 1577! We’ve never seen a date from the 1500s on any of our slabs. Two of our Claymore slabs bear the year 1600, and the panel in the arched tomb recess is from the late 1500s, but this would be a new find on any of our gravestones. 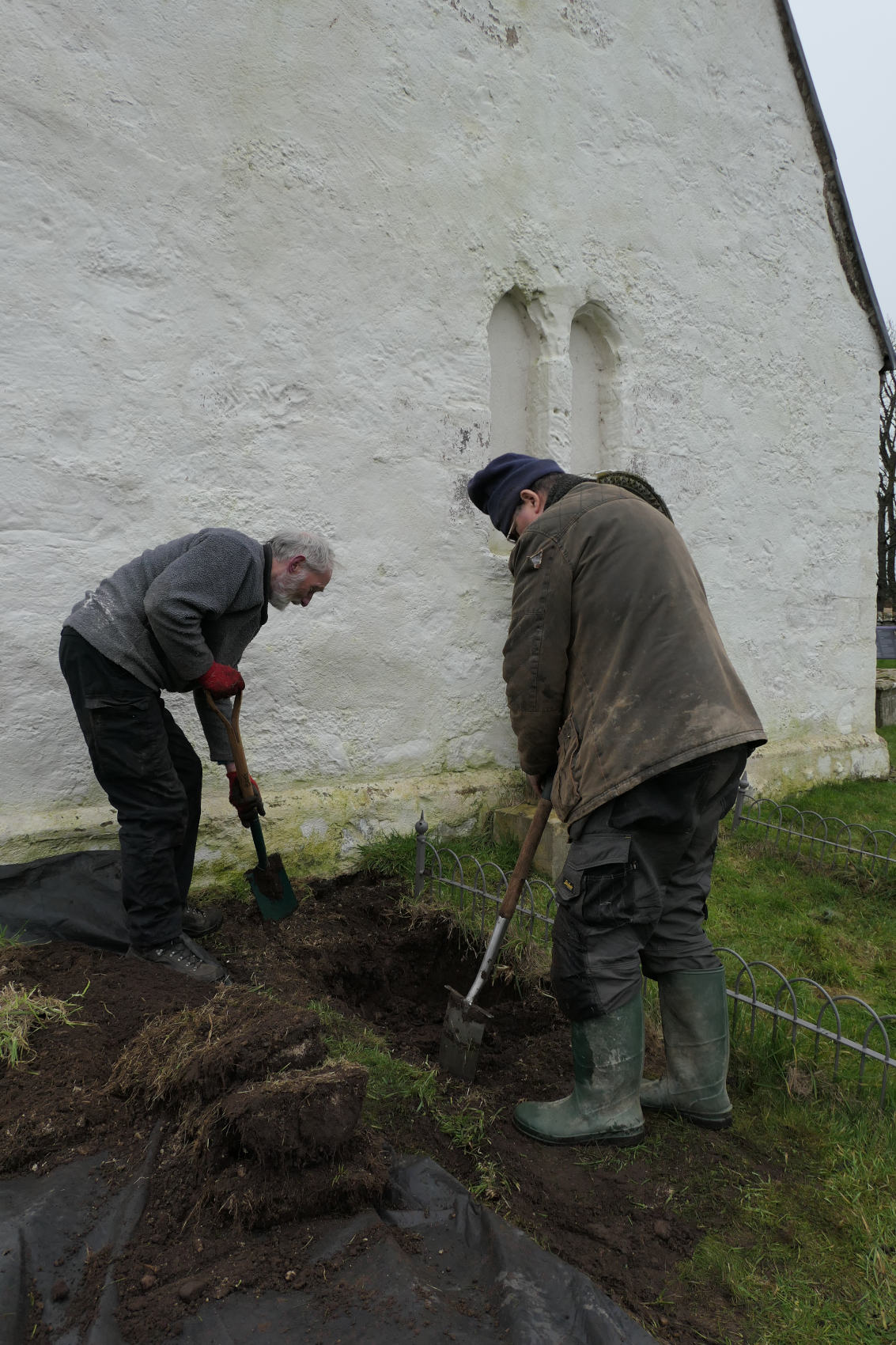 how gloomy is that! photo by Jim Mackay 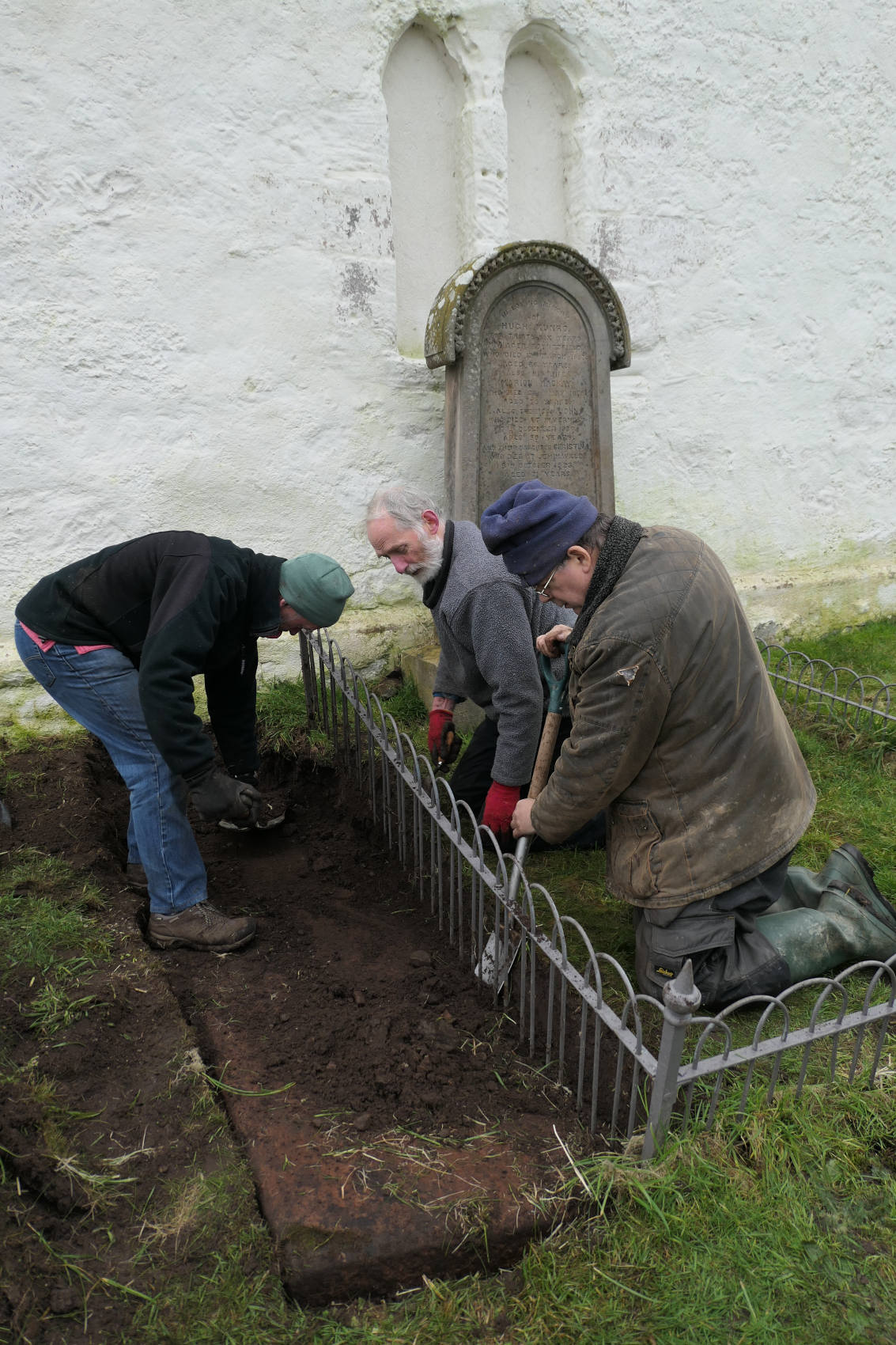 but despite the dark, chilly conditions, the Kirkmichael volunteers press on; photo by Jim Mackay 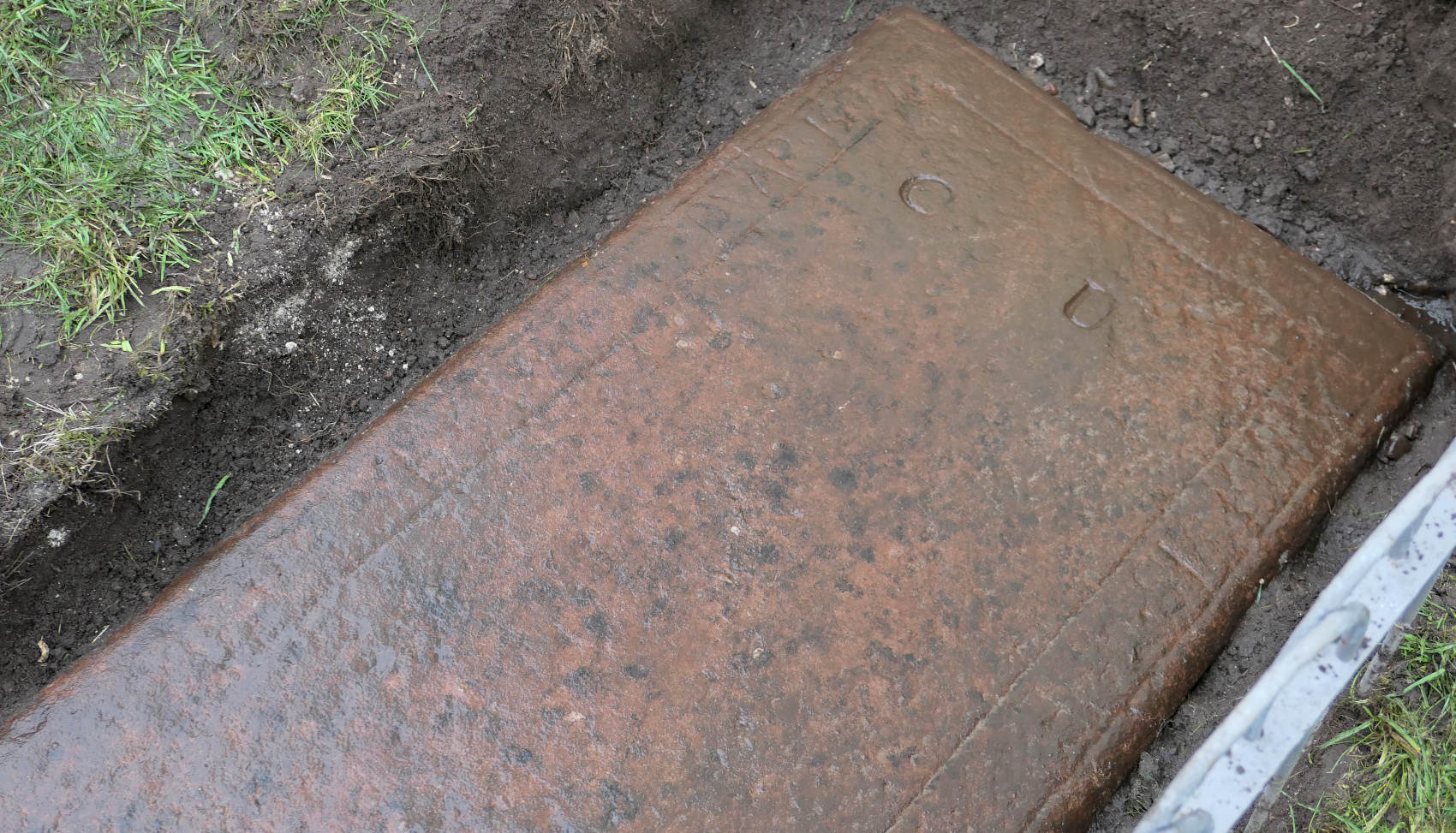 Night-time oblique photography, not very pleasant in the depths of cold, damp December, confirmed enough of the perimeter text to make us decide that we should call in Andy Hickie with his photogrammetric techniques. The slab had obviously been re-used later by “C U” – most likely a Charles Urquhart. But we felt more of the original text around the perimeter could be recovered through photogrammetry.

that sure looks like 1577; night-time photo by Jim Mackay

and the date; night-time photo by Jim Mackay

Mid-winter was not ideal timing for photographing the stone for photogrammetry, so we curbed our impatience, put down a tarpaulin and re-covered the slab in soil and turf ready for the spring. And then Coronavirus struck. It was many months before we could return to action. And hence, by the time we returned in summer 2020 when lockdown restrictions eased, the turf we had so carefully re-laid had grown back and it was difficult to pick out exactly where the ancient slab lay!

Neil gamely re-excavated the slab, soon locating the protective tarpaulin, which by now had roots growing through it. As one approached the wall of the chancel, the soil rises so there is a good depth to remove closer in to the wall. A position close to the church, of course, can often be an indicator of the importance of the family commemorated on a slab. 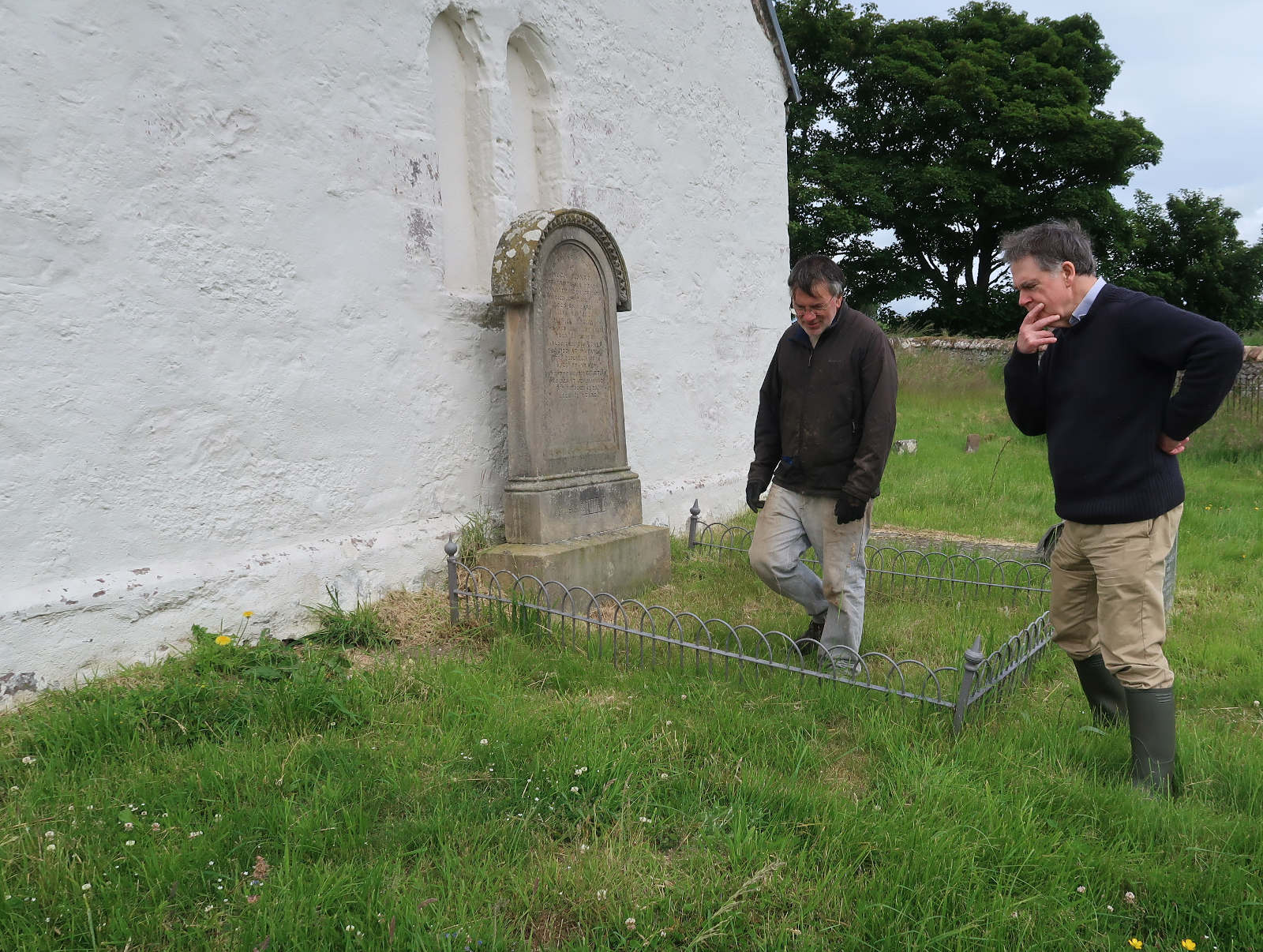 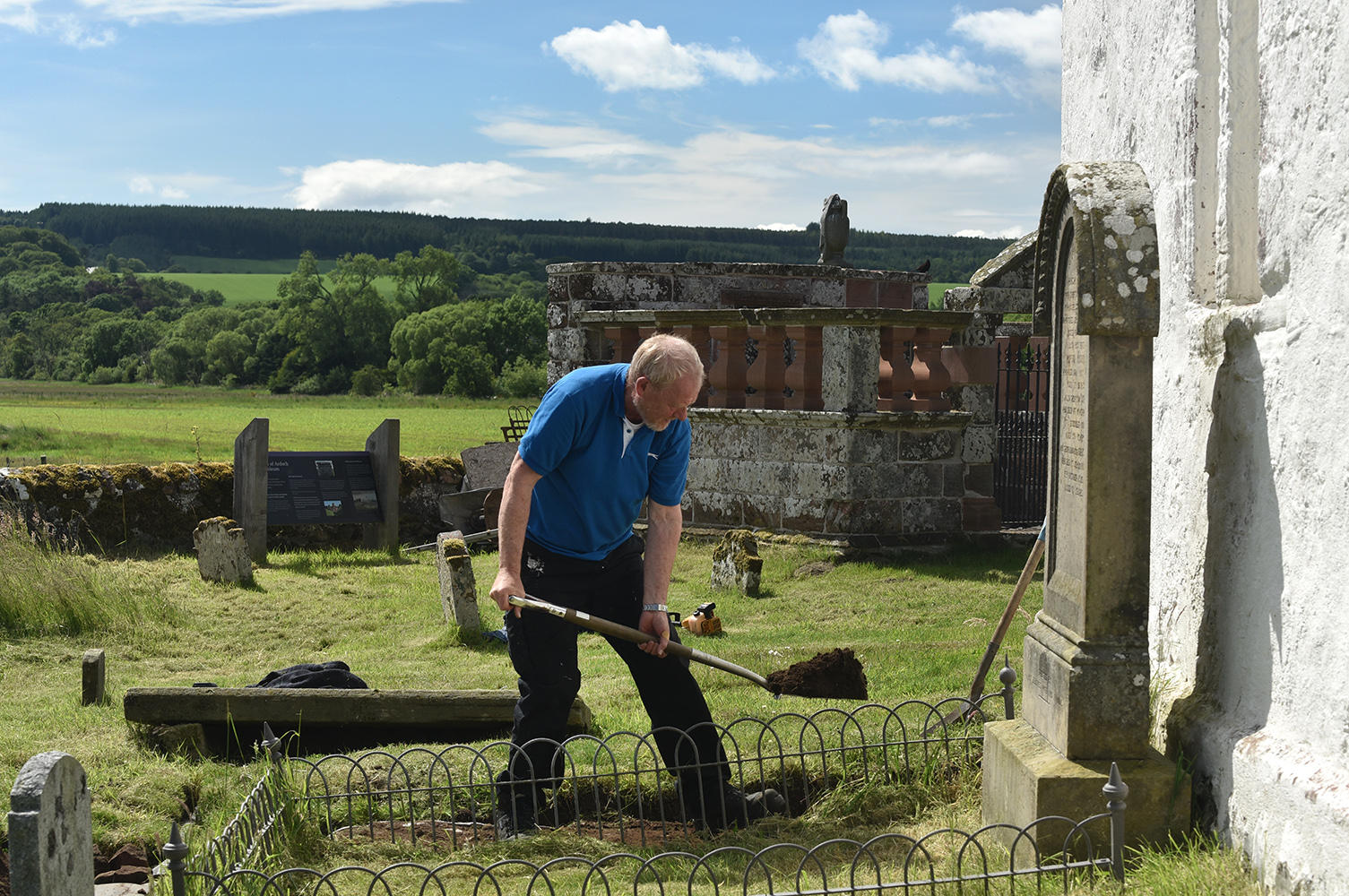 With the slab temporarily exposed, Davine takes the opportunity to tell our passing cyclists, Shirley and Alastair Matheson from Cromarty, about the old slabs of Kirkmichael and the importance of this one in particular. Andy arrives to take countless pictures to build into his photogrammetric models. Photography finished, we re-cover the slab. A good depth of fine sand is placed on it first, to prevent abrasion from stones in the soil, and we place an enhanced depth of soil and turf over the complete stone, so that it is given much better protection than was previously the case. It is now safe for future generations from erosion, frost and, not least, the kirkyard grass mowers! 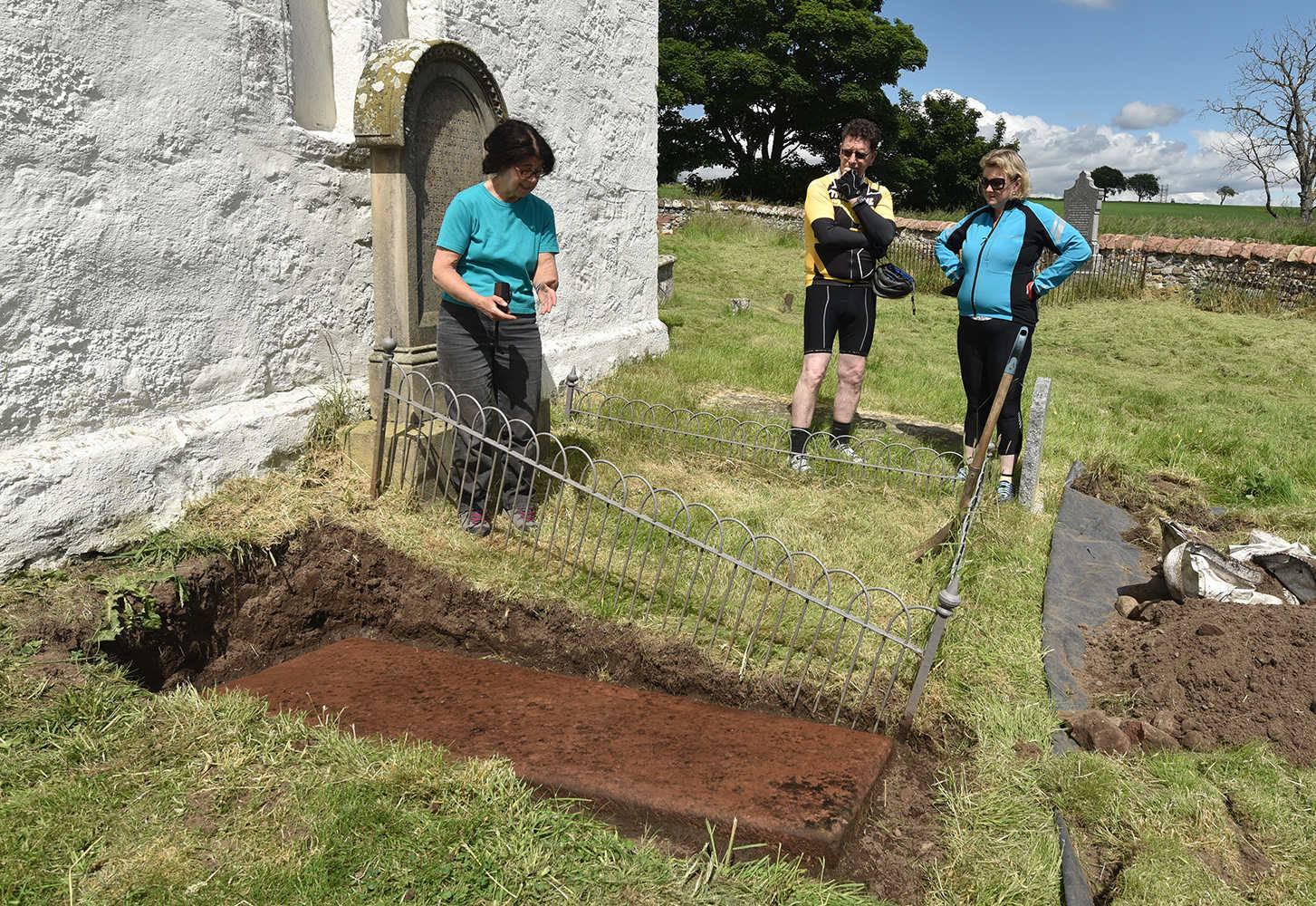 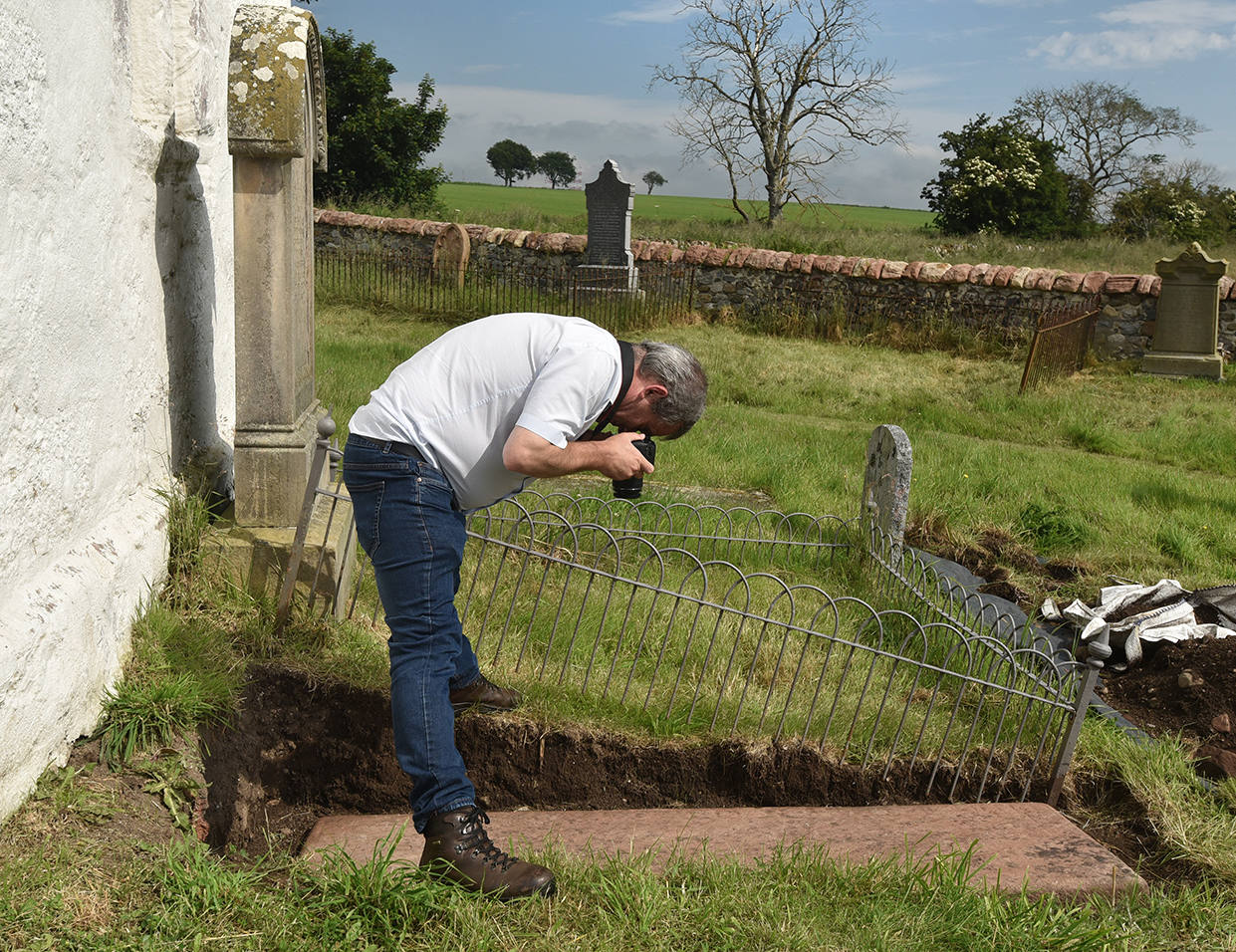 With the data stored in his computer, Andy starts to apply different techniques and adjusts his models and images to start pulling out the detail still remaining on the ancient tombstone. As well as the text a central linear feature starts to emerge. Sword or cross? You would expect it to be a sword rather than a cross on a post-Reformation slab, and sure enough there are just hints of the hilt and quillons suggested. 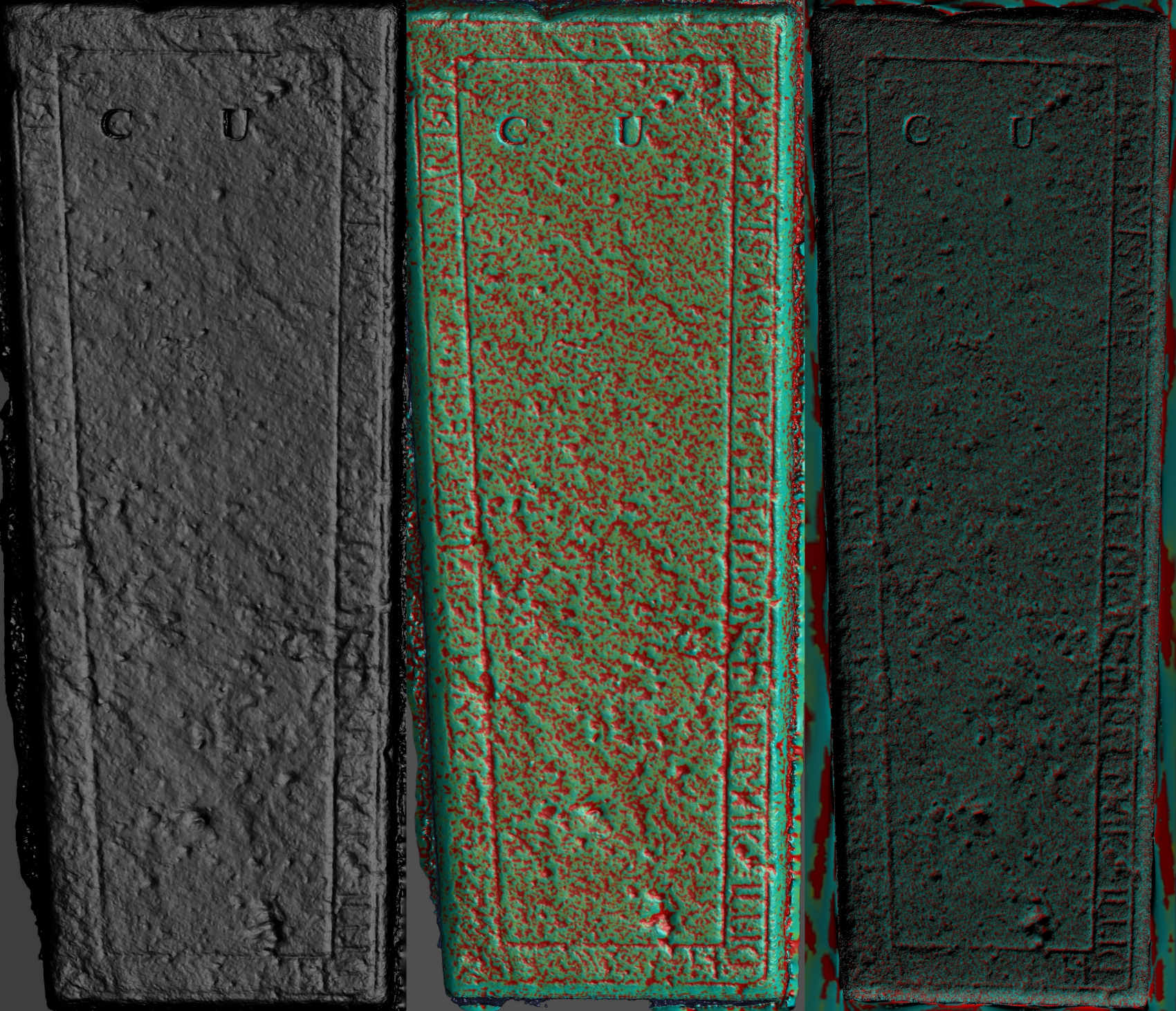 Some further adjustments. The corner projecting from the turf was more exposed than the rest but we can start to read the text... the top edge gives: HERE • LYES • ANE • DISCREIT • MAN • IHON • MAKOILLICH – translating from the Scots, that’s here lies a good man, John MacCulloch. There were many MacCullochs in the Black Isle and Easter Ross, and generally they were substantial tenants or even landowners. This John MacCulloch must have indeed been a significant man to have a burial lair right in against the church itself. The next word we think is taxman (a common variant of tacksman) but we are less confident on that, and unfortunately the section where his location would be carved was the bit that was sticking out of the ground and most weathered, but it may just be Udoll (as Udale was usually spelled). But further up, the text looks more promising.

Extraordinary – I am unaware of another graveslab bearing a date earlier than this in the Black Isle. Certainly, our medieval ornamental crosses, and the Pictish slabs before them, are all a good deal older, but there is something special to have a definite date recorded in stone! This slab was first laid here at Kirkmichael when the young James VI was King of Scotland. Elizabeth was Queen of England, and Mary Queen of Scots had not yet been executed.

Many thanks to Andy Hickie for the many hours of work that goes into this process and studying dozens of variant images to tease out the information.

For the record, the dimensions of the slab are: 1.925 m long, 0.71 m wide at top, 0.60 m wide at base. It is 0.135 m thick at the base. The slab on its left, immediately adjacent, is a strange one – it is included as a “possible” medieval cross in our Story Behind the Stone “Other Medieval Stones at Kirkmichael” here under the name “the railing post slab” as two holes had been carved into it at either end to hold, we think, small posts for a railing! We are not sure if that one is truly a medieval cross or a slab carved to mimic a medieval cross, but it does suggest that the stones by the east wall of the chancel are rather special.

As usual with our discoveries, we posted the story on Facebook. This Facebook post proved to be one of our most popular, attracting 9,887 views, and 140 likes. It also made an impression on the organisers of the Scottish Society of Antiquaries “Dig It!” project, who decided that our find should feature as one of three in Scotland in 2020 to be illustrated as part of their Digital Art project. Together with our (at that time) anonymous artist, Li Caswell-Sou of Stirling, we developed a story-line.

Dig It! suggested a scene when the slab was being purchased. I felt it would be more visually interesting to have an image of the slab actually being carved, at the back of the chancel, with the original lancet windows featuring strongly. Dig It! agreed, and asked was there some way to incorporate a theme of disadvantaged groups in some way. No problem, we said, as we have always promoted, right from the start of the notion of having our own re-carved medieval ornate crosses, encouraging the visually challenged to feel our new stones, to gain an appreciation of the carving from the tactile experience. Let’s have a girl with impaired sight touching the carving on the slab. Initially, our blind girl reaching forward to touch the carved sword was just one of a group of interested children surrounding the stone-carver. We thus produced an initial specification for the artist, with images of the slab and the site and elements we felt could be included.

Our artist, with a true sense of the story-teller, felt there would be a stronger narrative with the one child rather than a group. She asked for shots of Kirkmichael set in its landscape (and our drone photography proved invaluable here). She produced two story-lines, one where the story follows the experience of the stone-carver, the other of the girl. We plumped for the one where the story follows the girl, who is drawn round the back of the chancel by the curious sound of the chip-chipping of the stone-mason at work. I felt at the time that the stone-carver looked rather reminiscent, but it was only after the artwork had been published did one of our volunteers, Donald, point out the resemblance between the kindly stone-carver and fellow-volunteer, retired archaeologist Jonathan Wordsworth. He had featured in several of the photos supplied to the artist and obviously had made an impression!

Small refinements were introduced, such as the girl being present in the graveyard because she was placing a flower on the grave of a loved relative. The colouring of the background was selected out of options drawn up by the artist. Within less than a fortnight of the process starting we had the finished output from Li! In turn, we published the story of the inception and development of the artwork on a Facebook post which again was very popular – 3,108 views and 90 likes at time of writing, and the story also featured in the national press.

And so we present certainly our first story comic featuring Kirkmichael. Move Over Marvel! 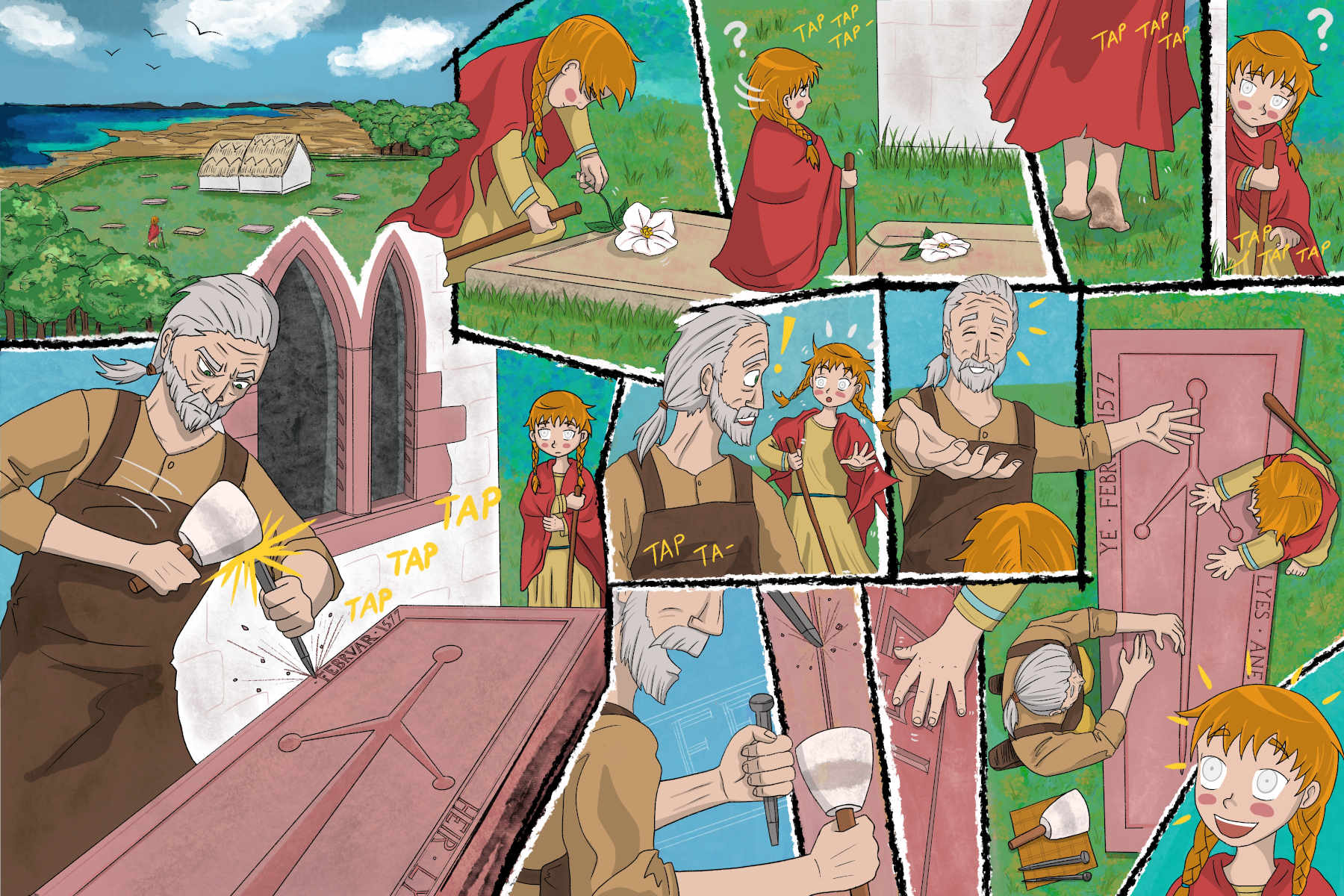