For 30 years a crucial line of text on a large, ornate Cameron tablestone at Kirkmichael remained unreadable. Back in the 1980s and 90s the Kirkmichael stones had been separately recorded twice, but that line of worn, italicised text defied both sets of recorders. The remainder of the inscription was prosaic enough:

We couldn&rsqyilt place this family either – these Cameron stones were rather an embarrassment! And then, on 6 October 2018, as part of that year’s Highland Archaeology Festival, we excavated the gap between the two tablestones.

Some keen ladies early for the archaeological dig shelter from the rain with yrs trly under the yews; the site has been prepared for excavation of the gap between the two Cameron tablestones; photo by Carlann Mackay

At least we could tell the story of this family, as James Mackeddie and Christian Fraser were well recorded in the annals. Mackeddie wasn’t their real name, it was Cameron, and one of their daughters went to see the Kirk Session to get one of the baptism entries for the family formally changed to Cameron. 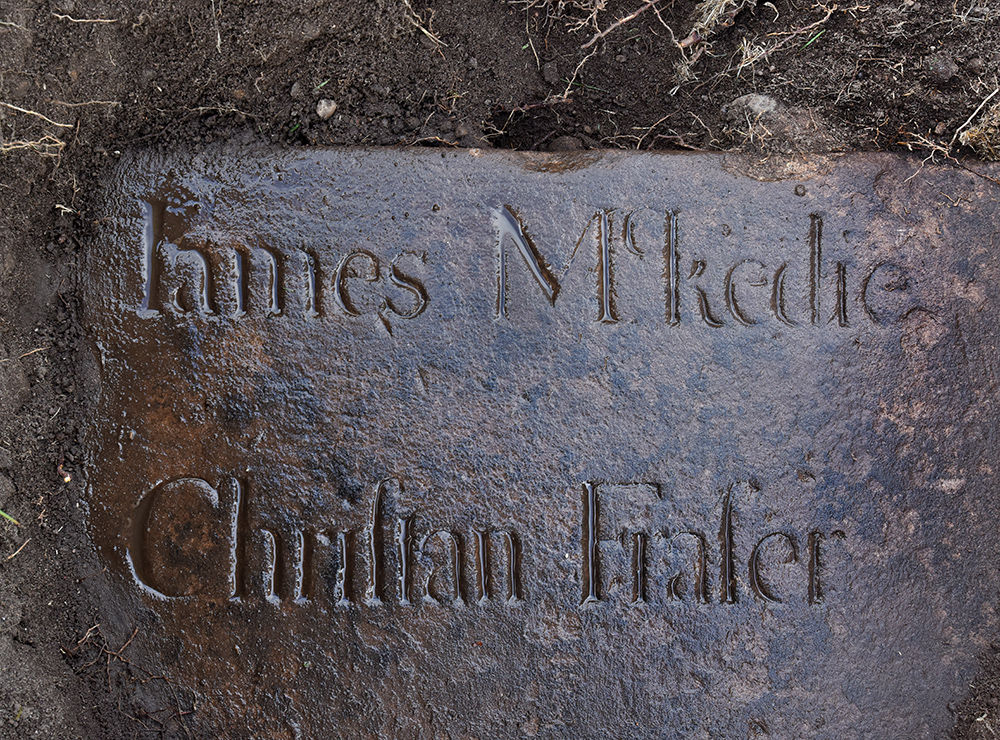 At the Church of Resolis the 3rd day of November 1834. … An application at this meeting was made to the Session by Christian Cameron residing at Jemima Ville respecting an extract which She had received from the Clerk of the Baptism of her brother David Cameron out of the parish Register of baptisms of date Augt 1796 & in which her brother’s surname is erroneously inserted. She further stated, that the real surname of her & of her brothers family and forefathers is Cameron, but that from the first of them who came to reside in this Country they Received the patronimick Surname of Mackiddy; That after the Baptism of her brother David in the year above mentioned her father authorised the Kirk Officer to get her brother’s baptism registered & that the Kirk Officer had given to the Clerk of Session the surname of Mackiddy instead of Cameron & which was accordingly inserted, consequently that the extract which She has now received from the Clerk of her brothers baptism & in which he is designated Mackiddy & not Cameron will not answer the purpose for which her brother at present demands such extract. It being consistent with the Sessions proper knowledge that the said David Cameron & his family & forefathers were really of the surname of Cameron & not Mackiddy they therefore unanimously resolved to correct this Clerical Error in the Register by erasing the surname Mackiddy with the pen & putting the surname of Cameron in place of writing the said name of Cameron on the Margin & duly attested by their Moderator and Clerk.

This Cameron family had some very enterprising members, and the Story behind the Stone on our website here delved a little into the life of the aforesaid David, who became a well-to-do coach builder who retired to Jemimaville, and a lot into the life of his brother James, who became a nationally-known nurseryman and seedsman, based in Uckfield, Sussex! 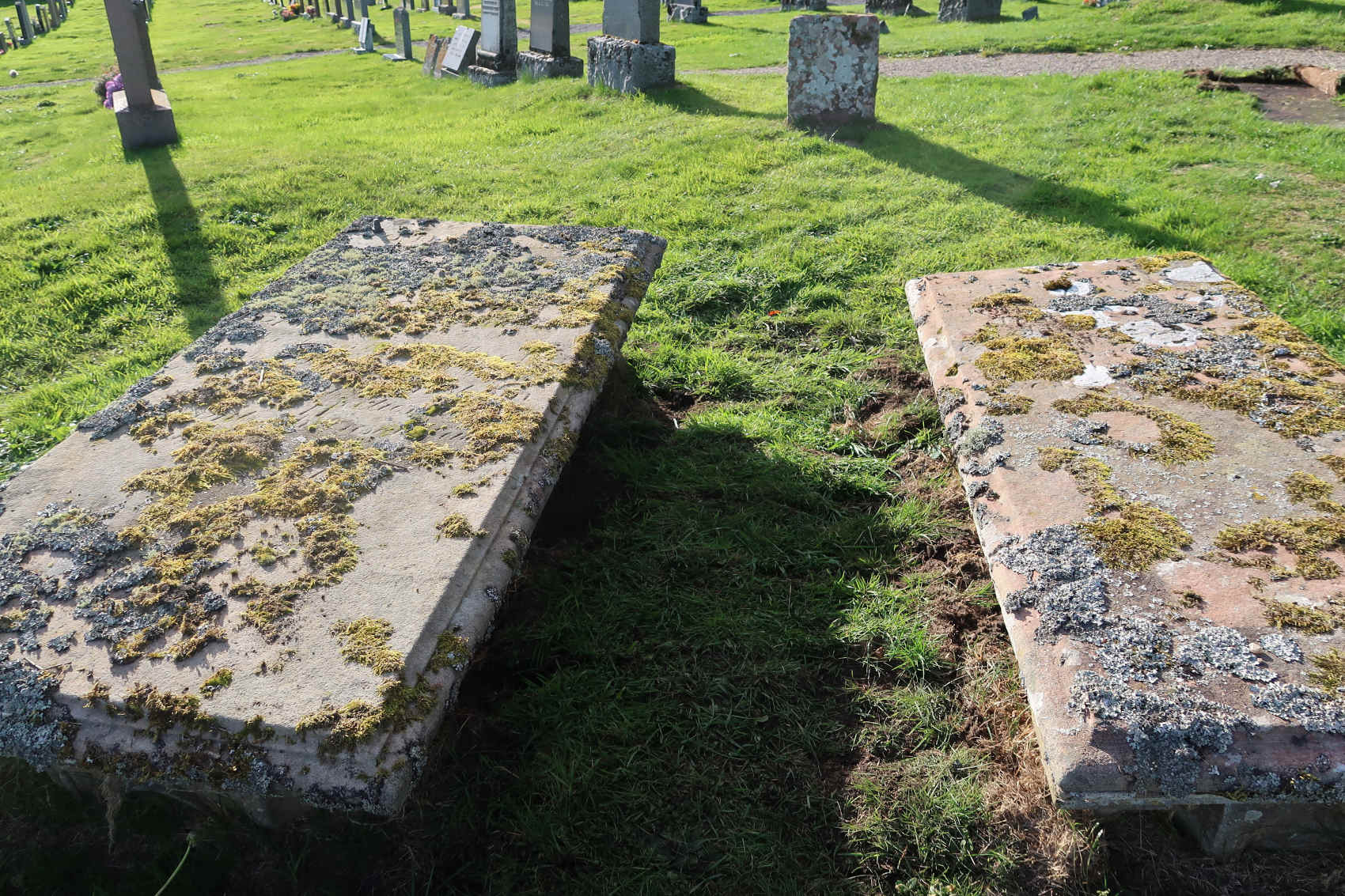 The humble slab to “James Mckedie Christan Fraser” between the two tablestones had thus acted as a launchpad to the entertaining story of these two successful brothers. It was most frustrating not being able to find out anything relating to the tablestones themselves, particularly the one with a line of unreadable eroded italicised text. In September 2020, Kirsty and I went down to Kirkmichael with a powerful LED lamp and a camera and tried out a technique we have been developing. We take dozens of photographs with low lighting, rotating the lighting around the slab so that the faded letters are lit up from different angles sequentially. And then follows a period of study on the computer to pick out individual letters and build up the missing words. 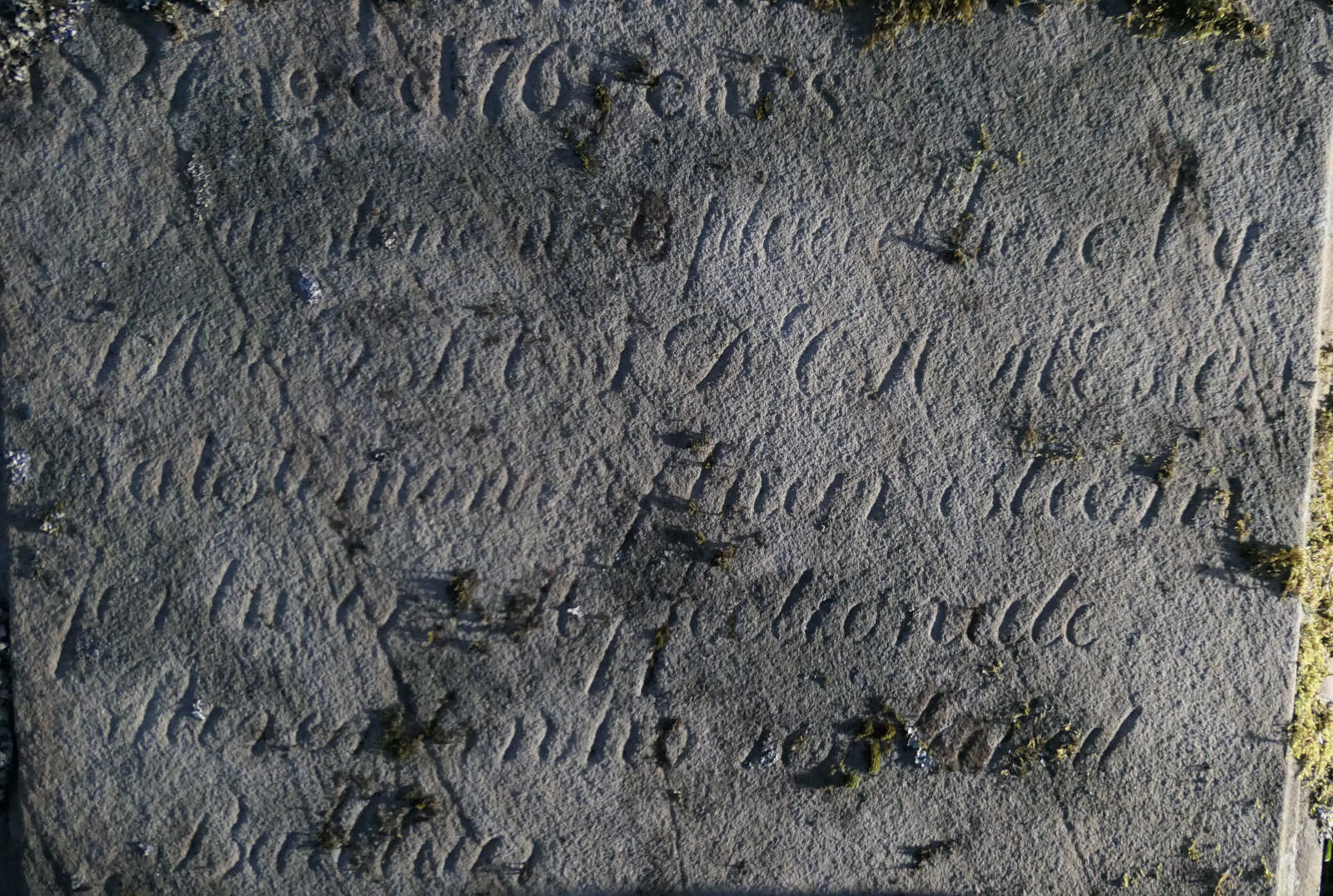 The letters were not only italicised but also highly stylised, but eventually the words emerged. The missing line was:

and the initials at the base were simply “JDC”. 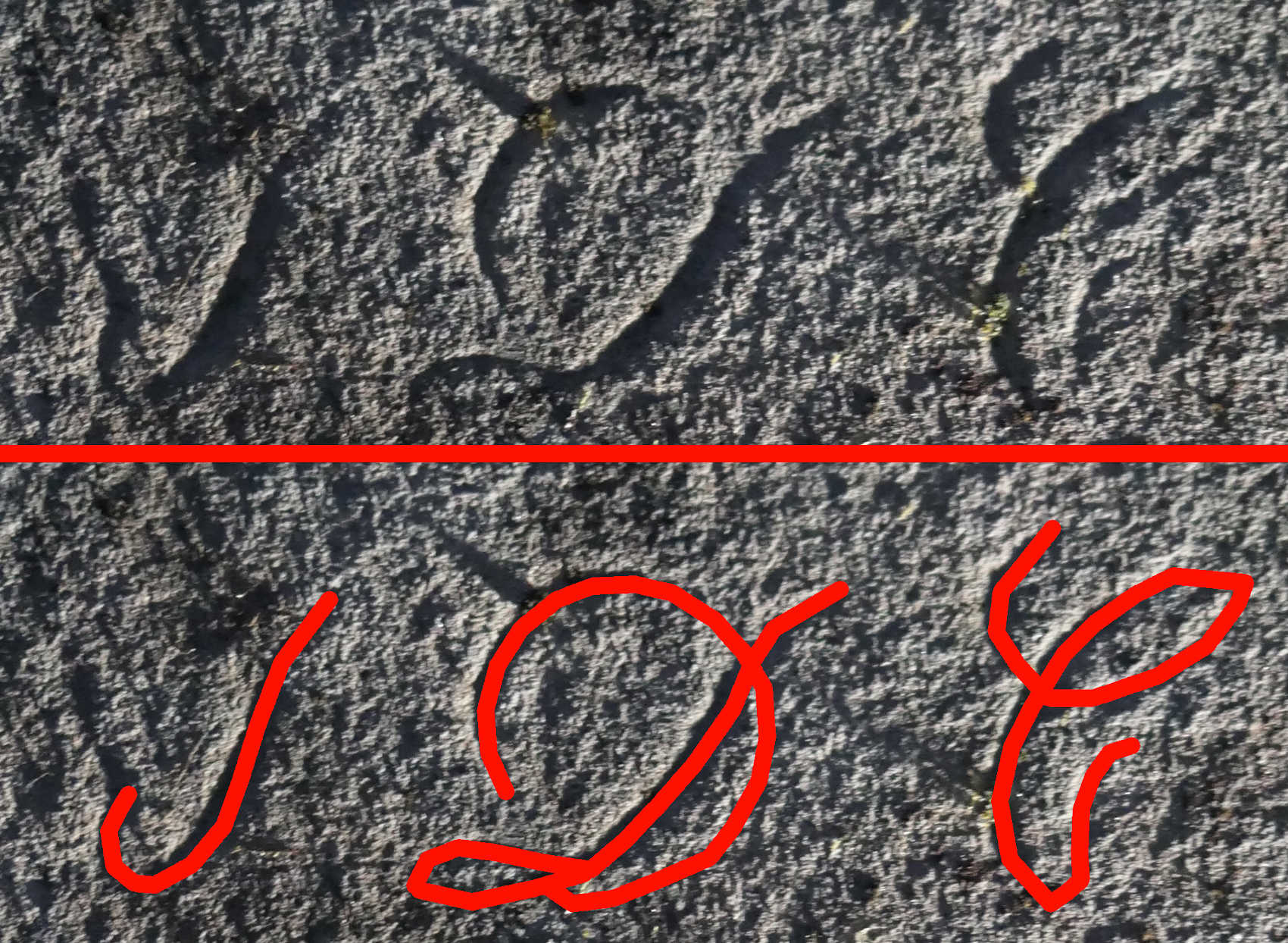 The children who had erected the tablestone to James Cameron and Christina Cameron were thus James and David Cameron. And then the penny dropped. These were the two successful sons of the James Mckedie and Christan Fraser commemorated on the adjacent simple slab.

Not wishing their name to be remembered as Mckedie, and no doubt wishing their parents to have a memorial worthy of their own status, the sons had commissioned a second expensive gravestone to stand beside the first.

But why were the parents recorded as James Cameron and Christina Cameron instead of James Cameron and Christian Fraser? Christina and Christian are interchangeable in the Resolis records, so that was not important, but in Scotland the wife retained her maiden name. But of course James was not living in Scotland; he had resided in Sussex for many years and his own wife, Georgiana Roots (an appropriate surname for his trade as a nurseryman) had become Georgiana Cameron. 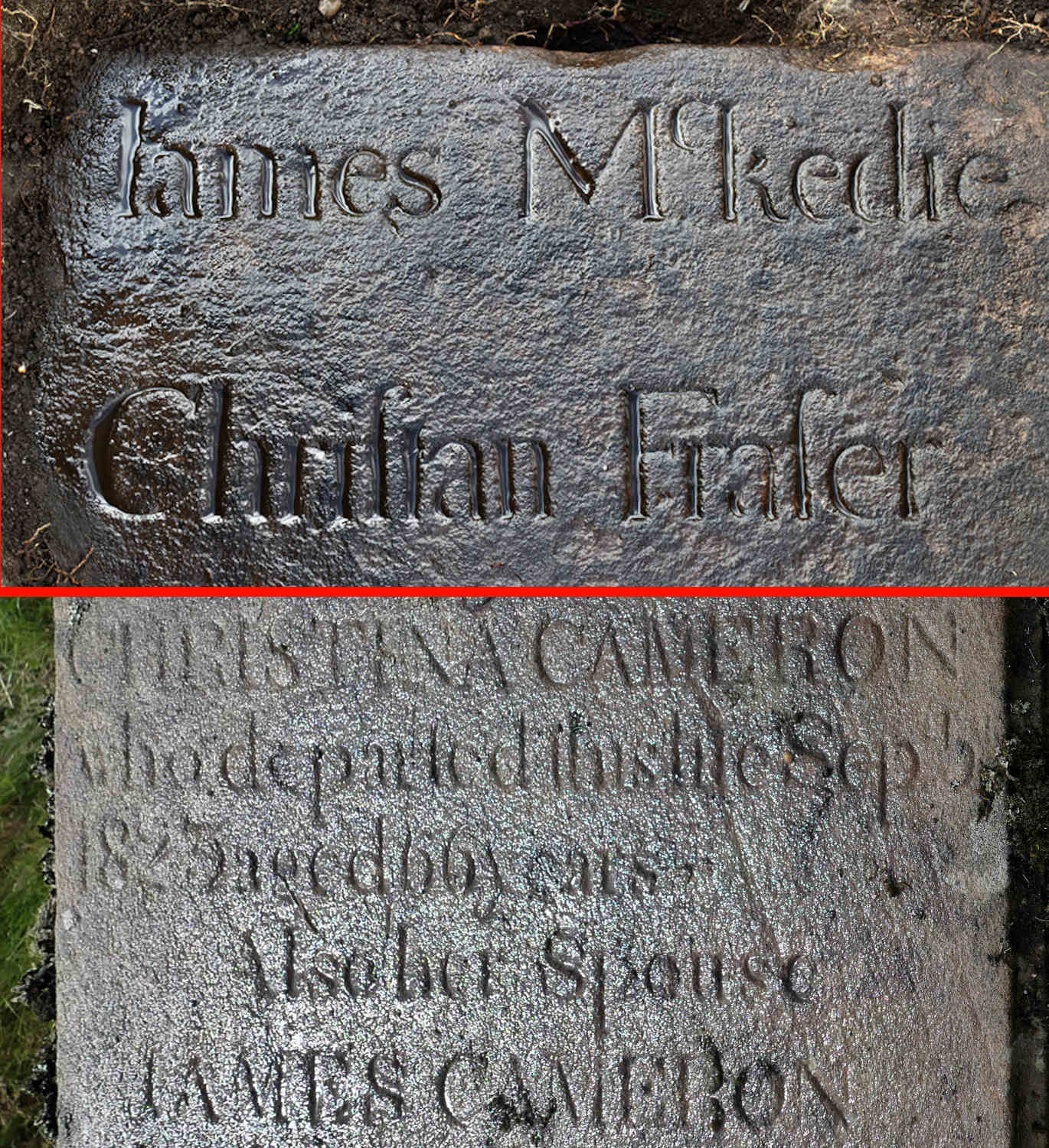 Other pieces dropped into place. We had decided to make a feature out of the ornate support on the tablestone and had noted that the flower depicted had eight petals instead of the usual five or six. As you will find in our companion story, James Cameron the seedsman and florist had a special interest in Dahlias, at one show in 1832 displaying nearly 200 varieties of Dahlia. The original Dahlia had eight petals.

The wordiness of the inscription was also explained. The brothers could afford to be effusive.

The inscription had thus been solved, but instead of insight into a new family, it simply shone a light on the social pretensions of the successful sons of the Balblair shoemaker, James Cameron alias Mackeddie and his wife Christian Fraser.

And the smaller tablestone erected by John Cameron to his sister Catharine who died in 1828 aged 15? Well, that is a mystery yet to be solved, but I presume they are part of the same James Cameron and Christian Fraser family. I did recently re-check the age and year but they are correct, and hence they cannot be children of James and Christian, as Catharine must have been born about 1813, when Christian would have been about 56. But they will be related.

So there we have it, two memorials commemorating the same couple, one a simple slab with the names Iames Mckedie and Christan Fraser and the other an ornate tablestone with the names James Cameron and Christina Cameron!

Appendix: Making a feature of the fan and flower support 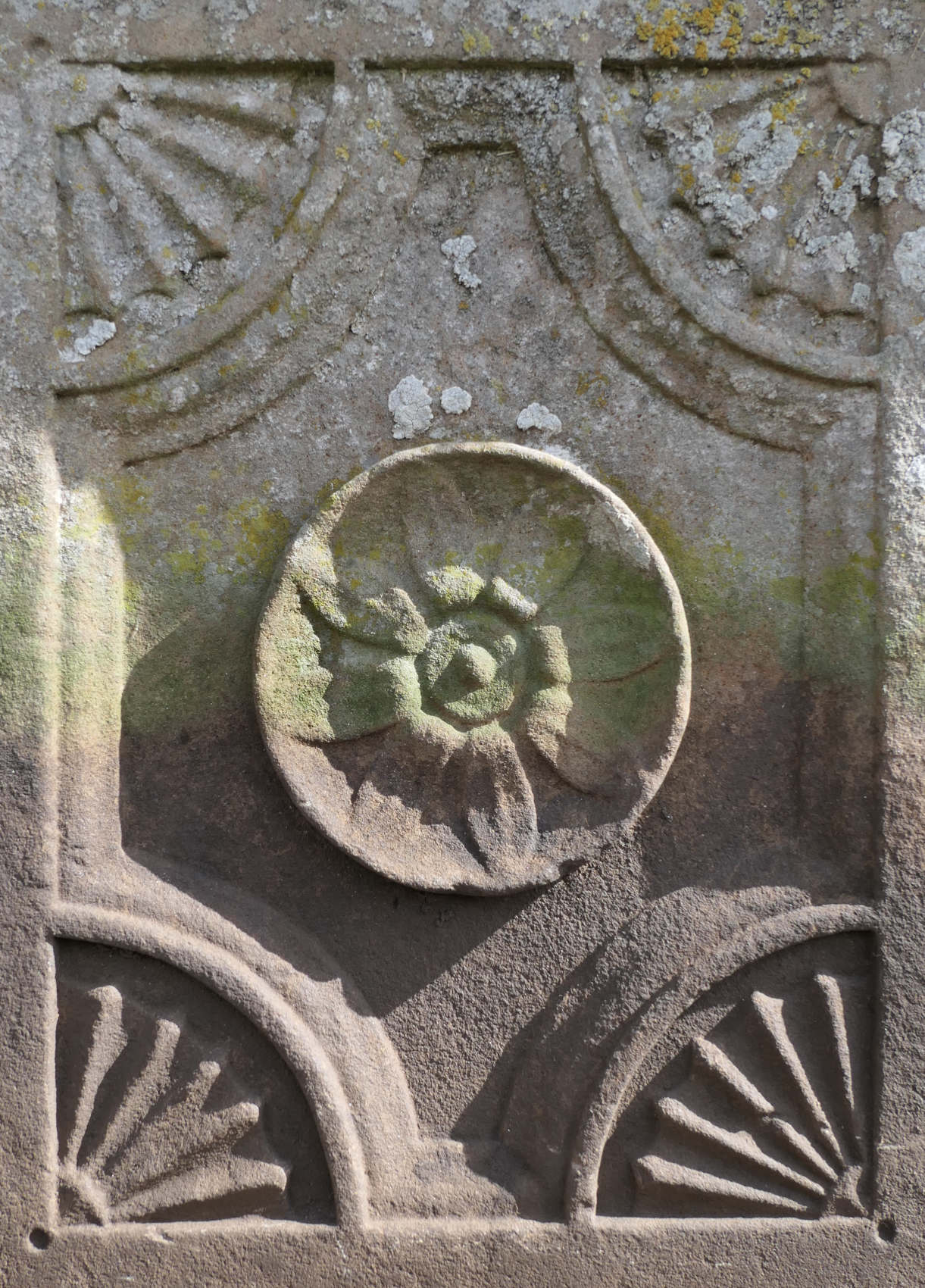 In September 2020, Davine had written a well-received Facebook post on tablestone legs generally. We were thereupon drawn to excavate fully one of the James Cameron tablestone supports given how exquisite the carving is, and to make a feature of it for the enjoyment of visitors.

The supports for this tablestone are certainly among the most ornate and beautiful in the kirkyard, with the central panel depicting four delicate fans and an eight-petalled flower. The small hole at each corner of this panel presumably was used to draw the arcs of the fans. 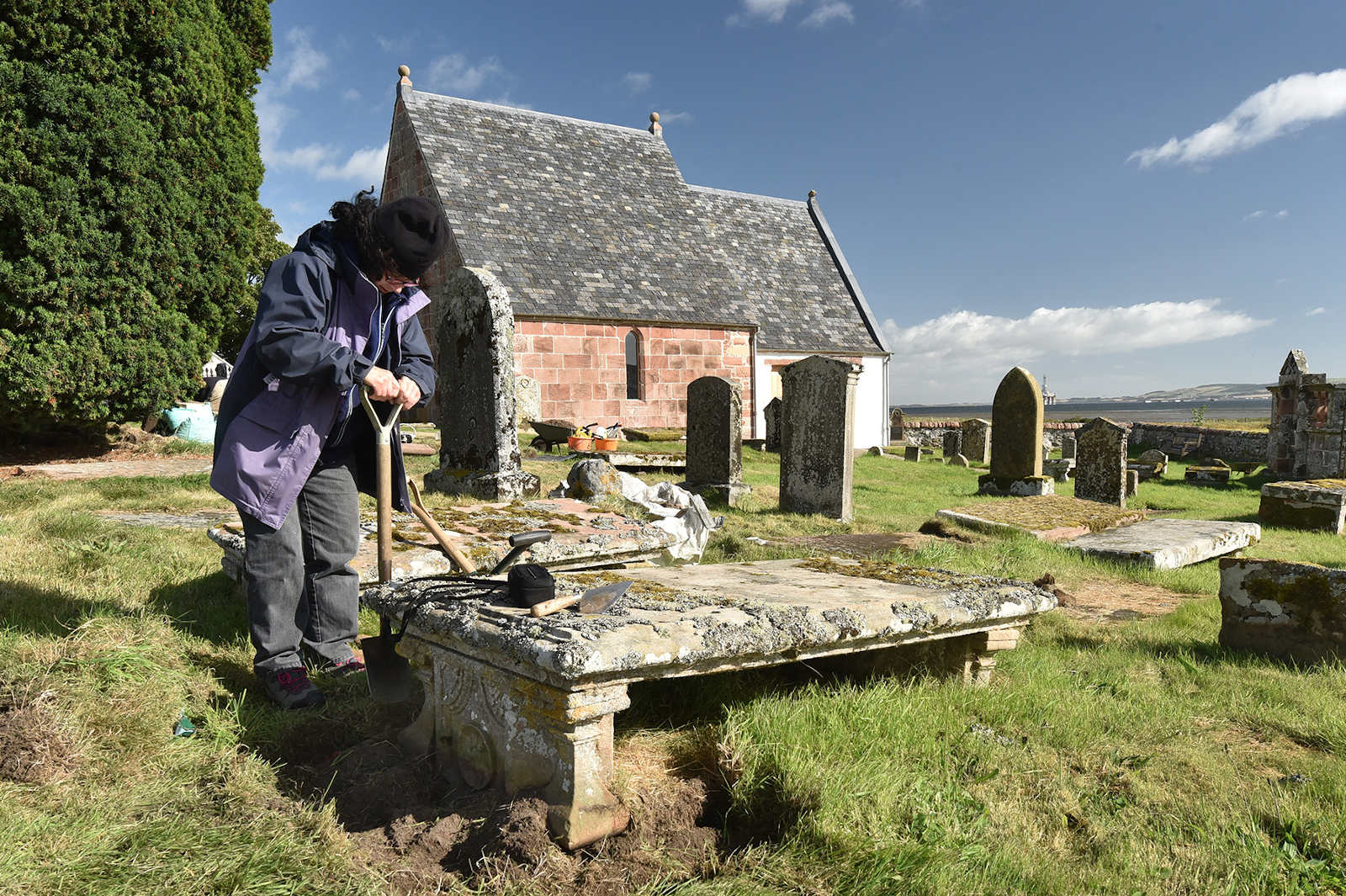 The tablestone has sunk well into the turf over the years so nothing of the beautiful supports can be seen. Davine has stripped out the top layer of turf which will be re-used when the leg has been excavated. 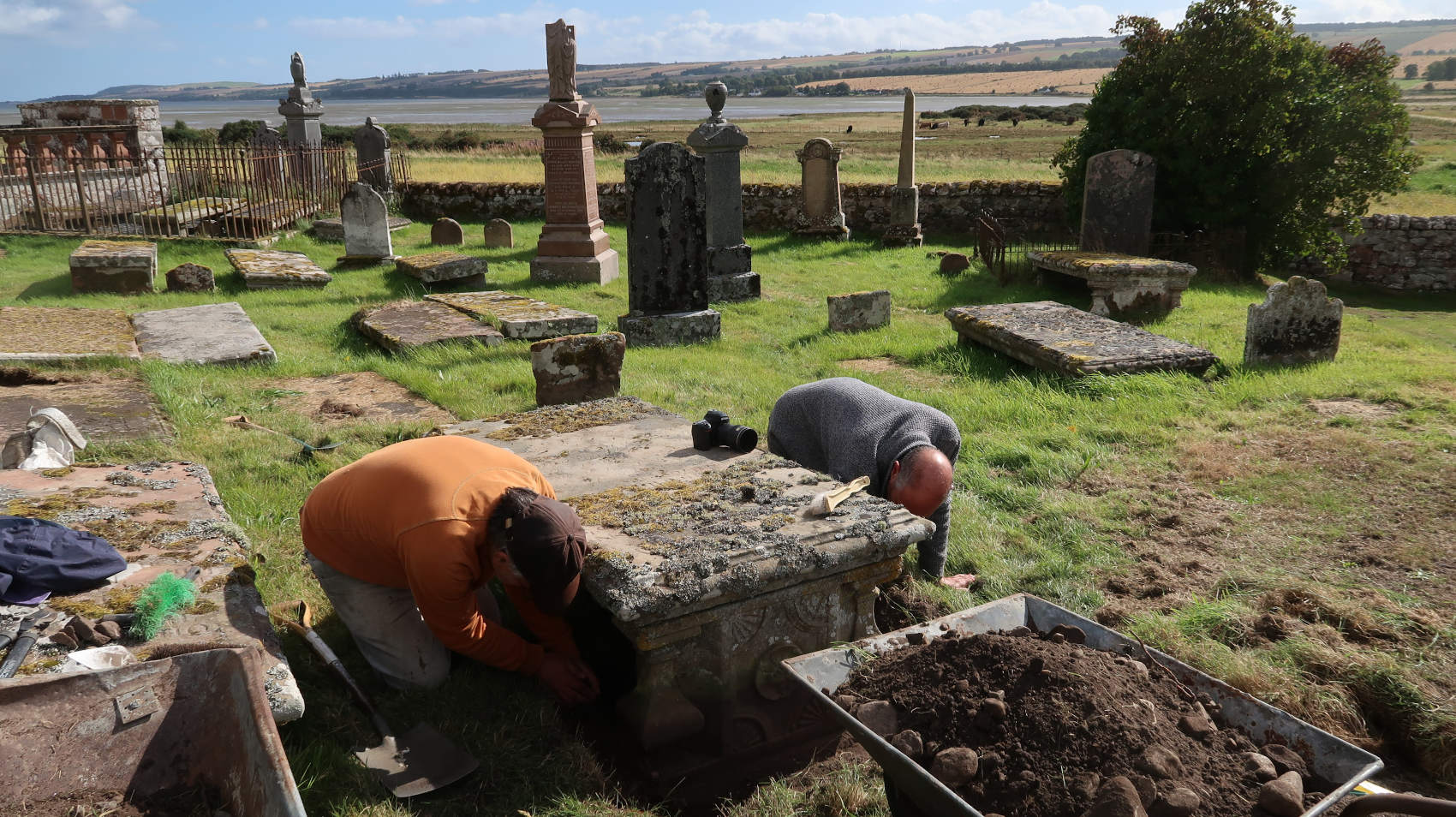 Andrew and Alastair have either lost some money or are clearing the foundation to see what the support is standing on. The best foundations are one solid slab extending from one support to the other. But given how much this one has sunk that isn’t likely… 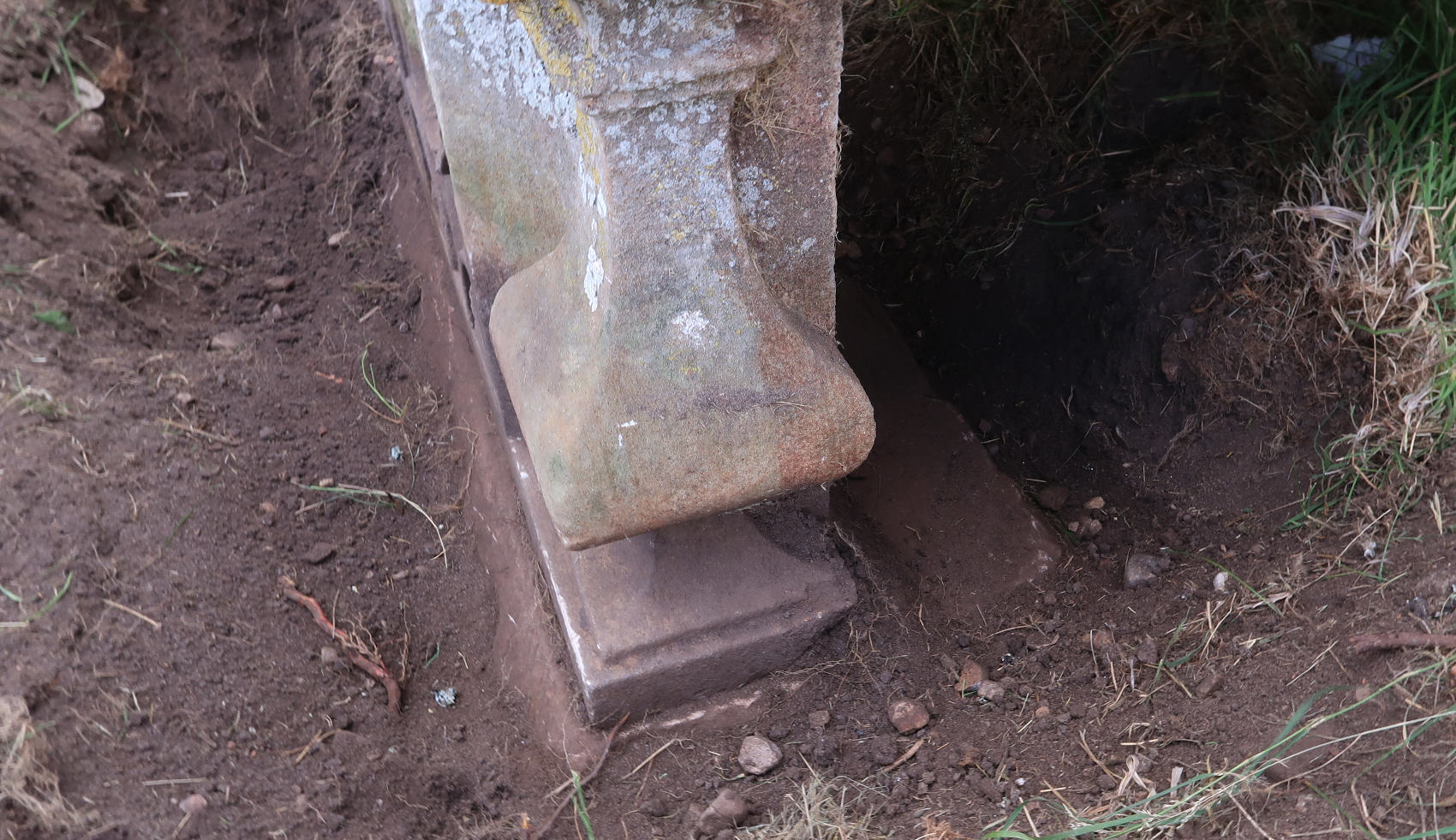 and indeed, the foundation proves to be a small slab of sandstone – far too small for the weight it is supporting. No wonder it has sunk. The slab is chamfered on one long edge and broken on the other long edge so we think it was a chunk of someone else's grave slab they memorial erectors used! 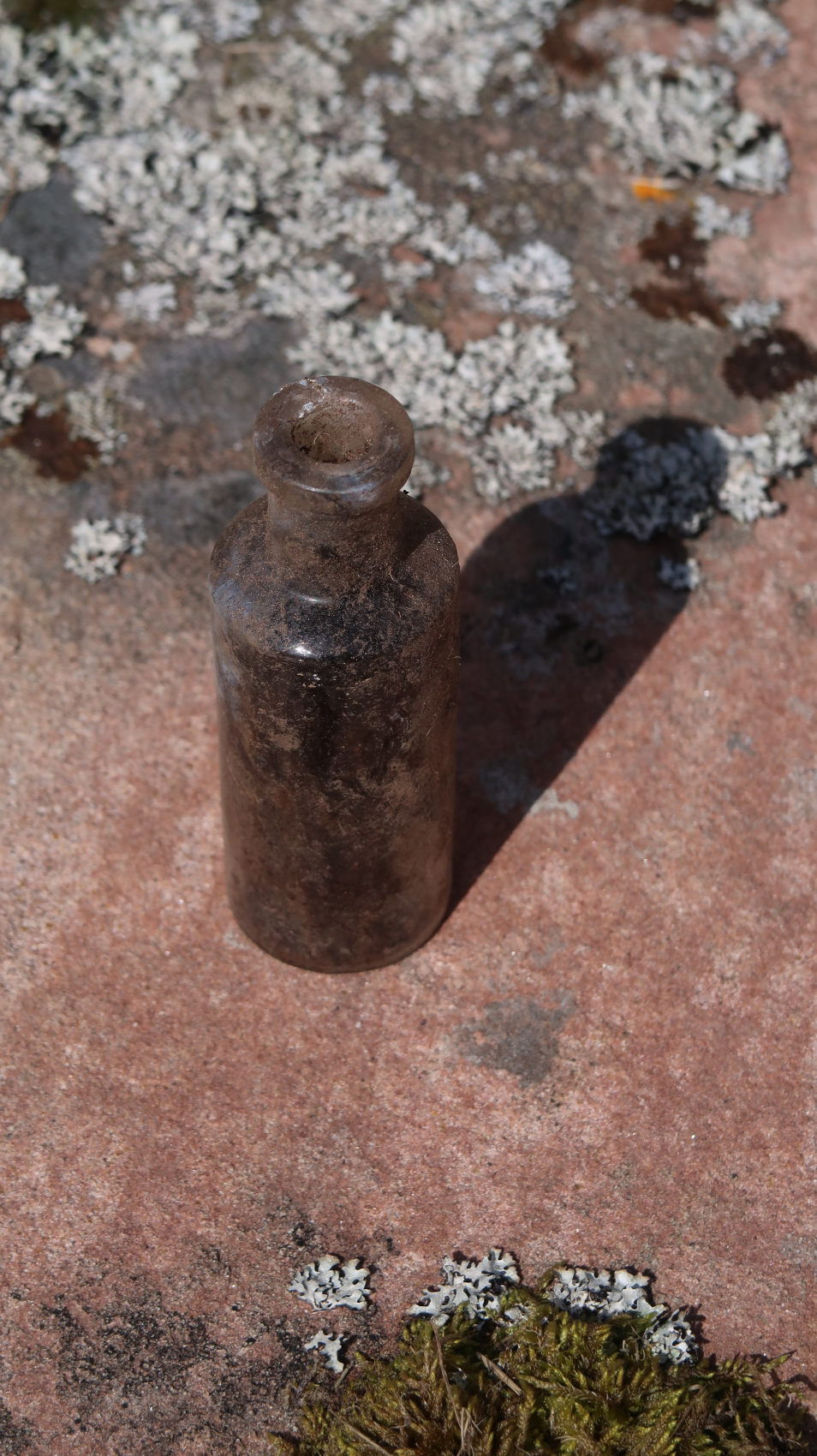 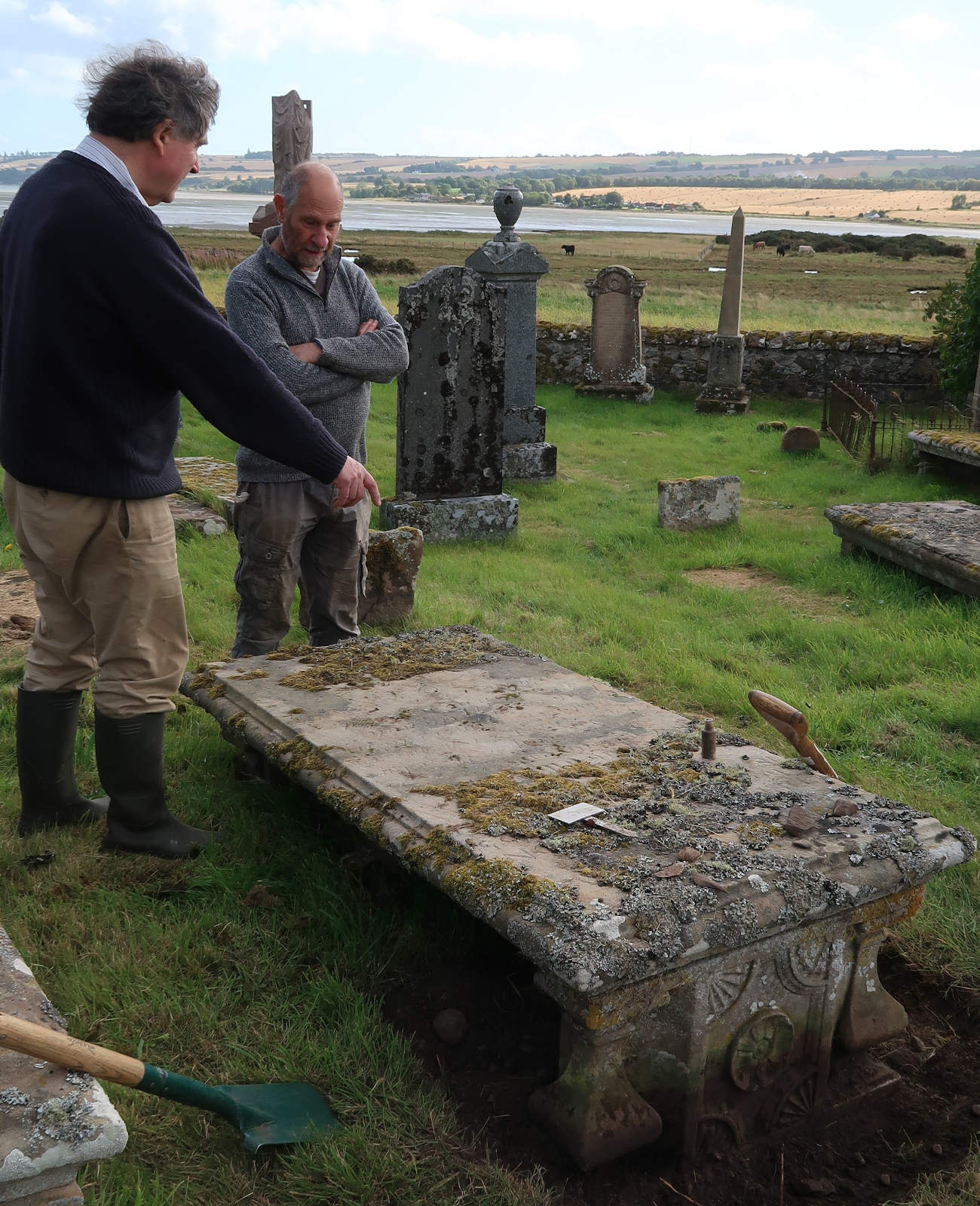 And what should be found tucked in beside the leg but a tiny little bottle, used for some long-past purpose. It is now in the collection of old bottles we’ve found at Kirkmichael. And on the right, yrs trly already practising some stories about the James Cameron and Christian Fraser tablestone on a captive audience!

Job done. The most delicate and beautiful of our tablestone supports is now fully on display to be enjoyed by our visitors at Kirkmichael!