The Story of ‘The Saucy Kate’

text: Dr Jim Mackay   photos as given below each image   painting extract from my copy of “Cromarty Bay, from the East” by Thomas Allom

With thanks to Genevieve MacIver, members of the Holm family and the Ross-shire Journal

The Saucy Kate arrives safely! I had heard references over the years to this old song of the Cromarty Firth and the exciting journey of Captain Briny Alastair and his crew up the Firth to Dingwall but nobody could recite all the verses or knew anything of its origins.

Back a few years ago, after an evening of reminiscing with James and Jock Holm (of Ferryton origin) over a bottle of Old Pulteney, old stories and verses came out, including recitals of “The Shooting of Dan McGrew” and “The Cremation of Sam McGee”. The subject of the Saucy Kate came up again, and James and Jock provided me with a couple of verses. I wrote to the Ross-shire Journal on the back of those snippets, seeking anyone who knew the remainder. I received a few more lines, but then there was silence. I feared the song was lost forever. 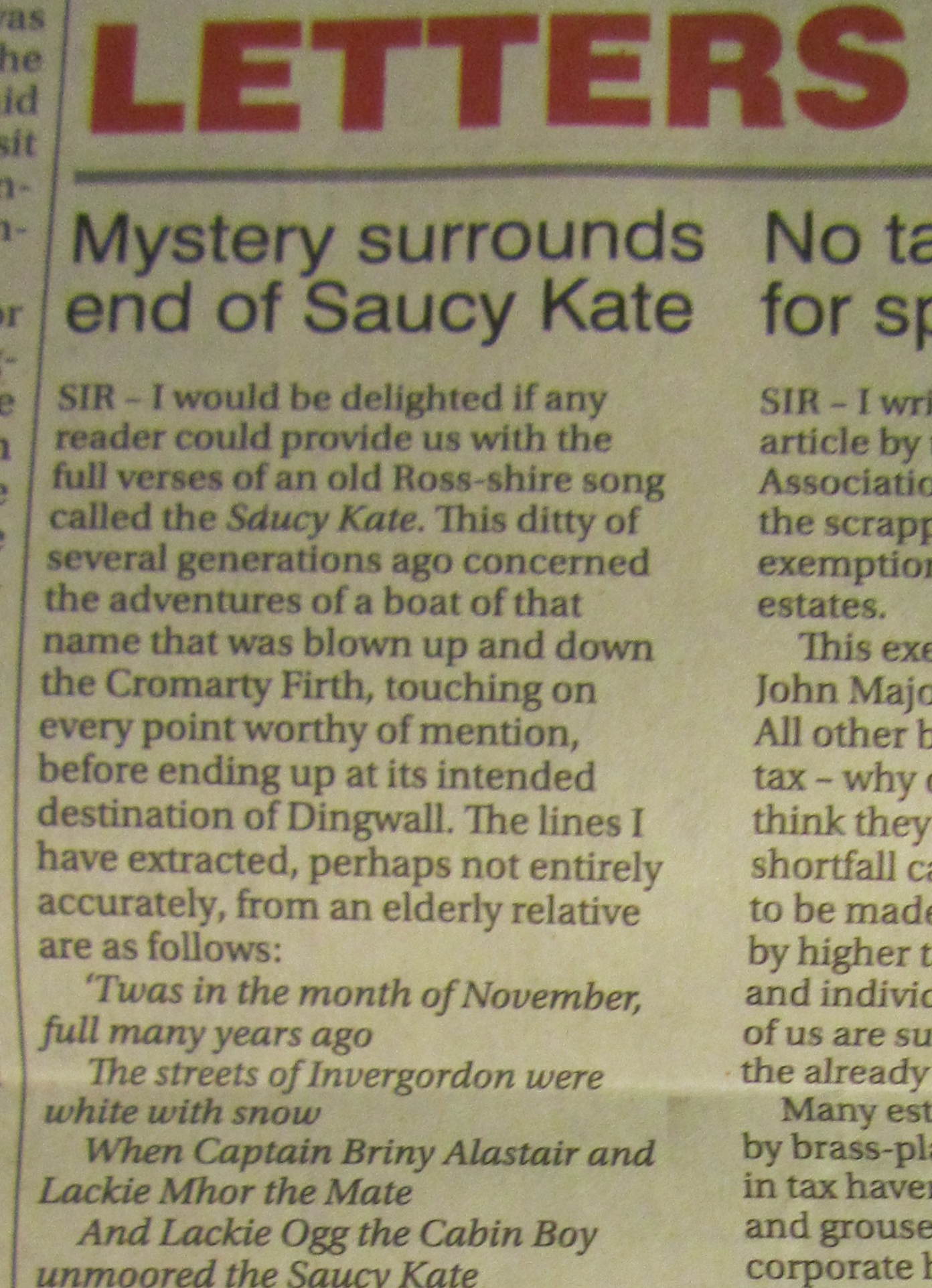 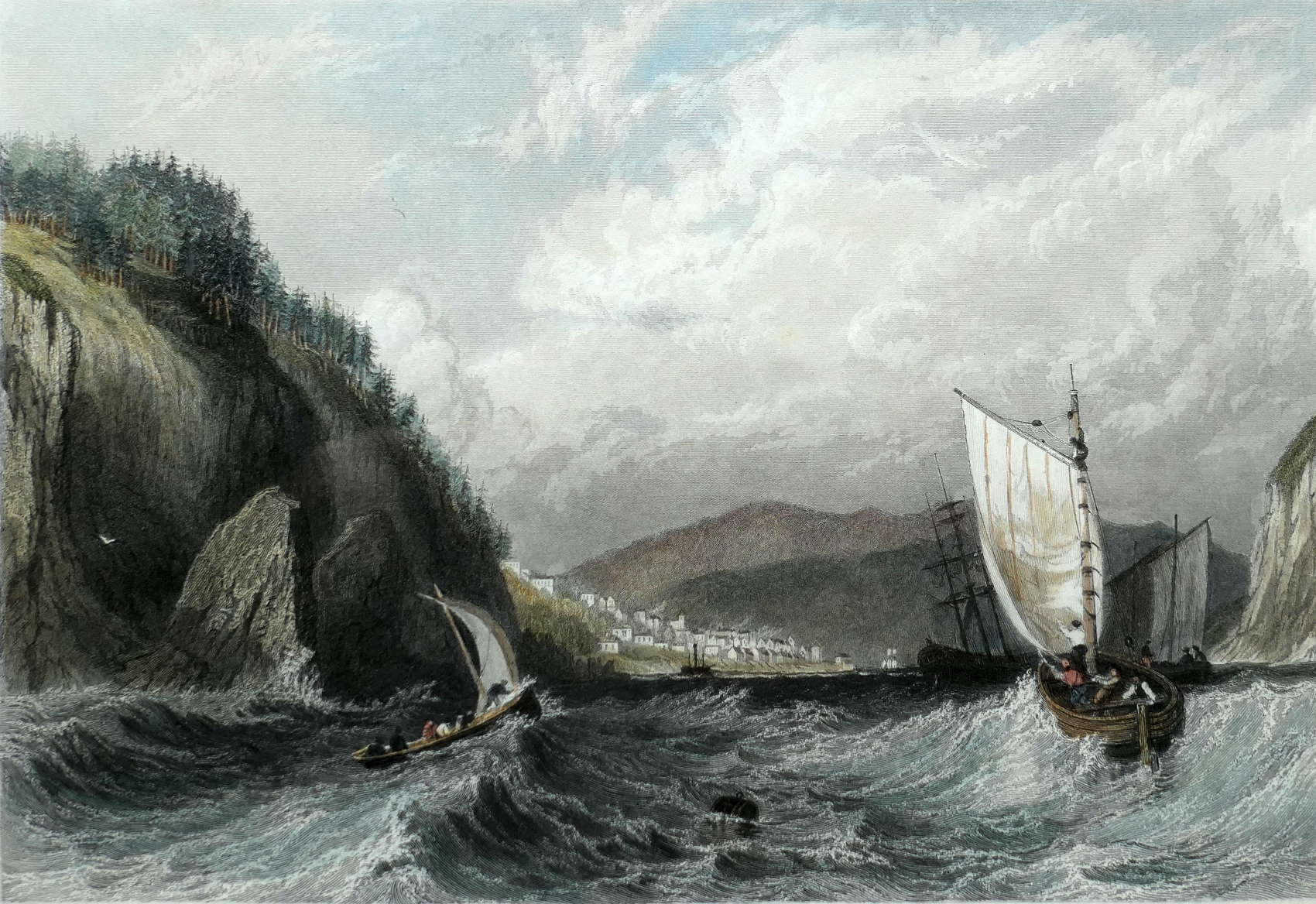 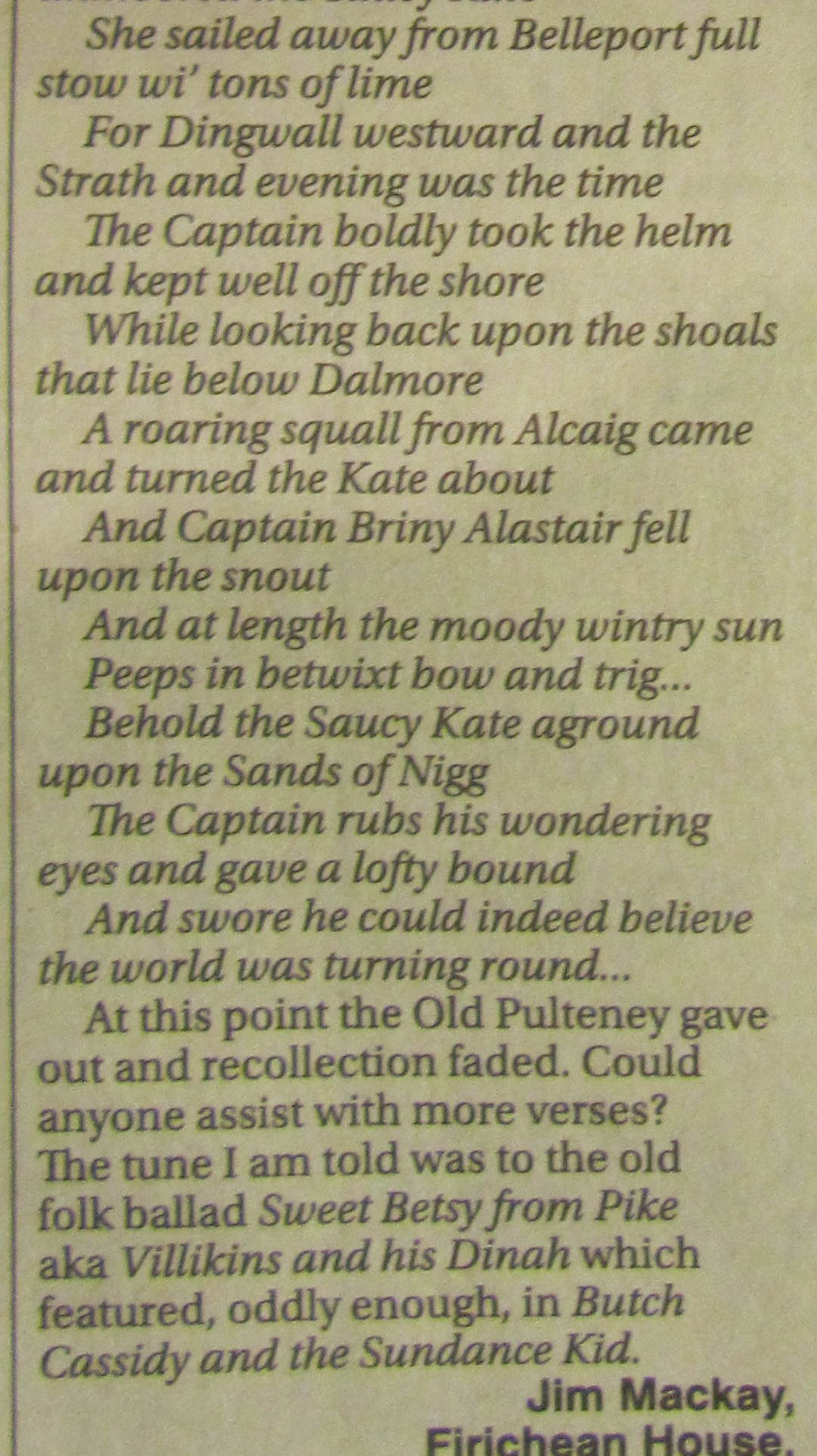 Genevieve MacIver, herself a Holm originally, cut out the piece from the Ross-shire as she remembered the song being sung by her grandfather John Holm in Balmungie. She too was interested in obtaining the verses. Eventually she secured from an old friend of her sister a transcript of the verses and passed them on to me. The song had been recovered! I’m not sure if every word is right, and there are variations between the snippets I’ve collected, so if you know someone who ever sings this, let me know their version!

When was the song composed? And who wrote it? I do not yet know. There is reference in one of the verses to the “dreadful ferry of Alness” and the ferry between Alness in Easter Ross and Alness Ferry on the Black Isle ceased operating back in the 1860s. There is also reference to Belleport Pier (but pronounced in the song always as “Bellie-Port”) which was constructed in the 1830s. Together those suggest a date between the 1830s and 1860s, but that internal evidence is presented only tentatively!

The Holm family at Ferryton about 1911, photograph courtesy of James Holm, Easter Ferryton. I think this image was almost certainly taken by the Cullicudden photographer, Donald Fraser, who has his own Story behind the Stone. Baby Annie Holm is close to her father, John Holm (1852–1940), with son Evan, who took over at Ferryton adjacent. Johnny Holm, who moved to Balmungie, carries the whip, whilst Tommy Holm, who moved to Easter Alness Ferry, is on the right. The girls are Bella and Jessie Holm.

The Holm family is a Black Isle farming family with particularly close connections with Kirkmichael. There are dozens of stones bearing the name “Holm” or the initial “H” in the kirkyard. I have a picture of Evan Holm, brother of the aforementioned James and Jock, with his daughter Miriam, standing between two of the stones of their Holm ancestors, altogether spanning seven generations over the period 1777 to present! 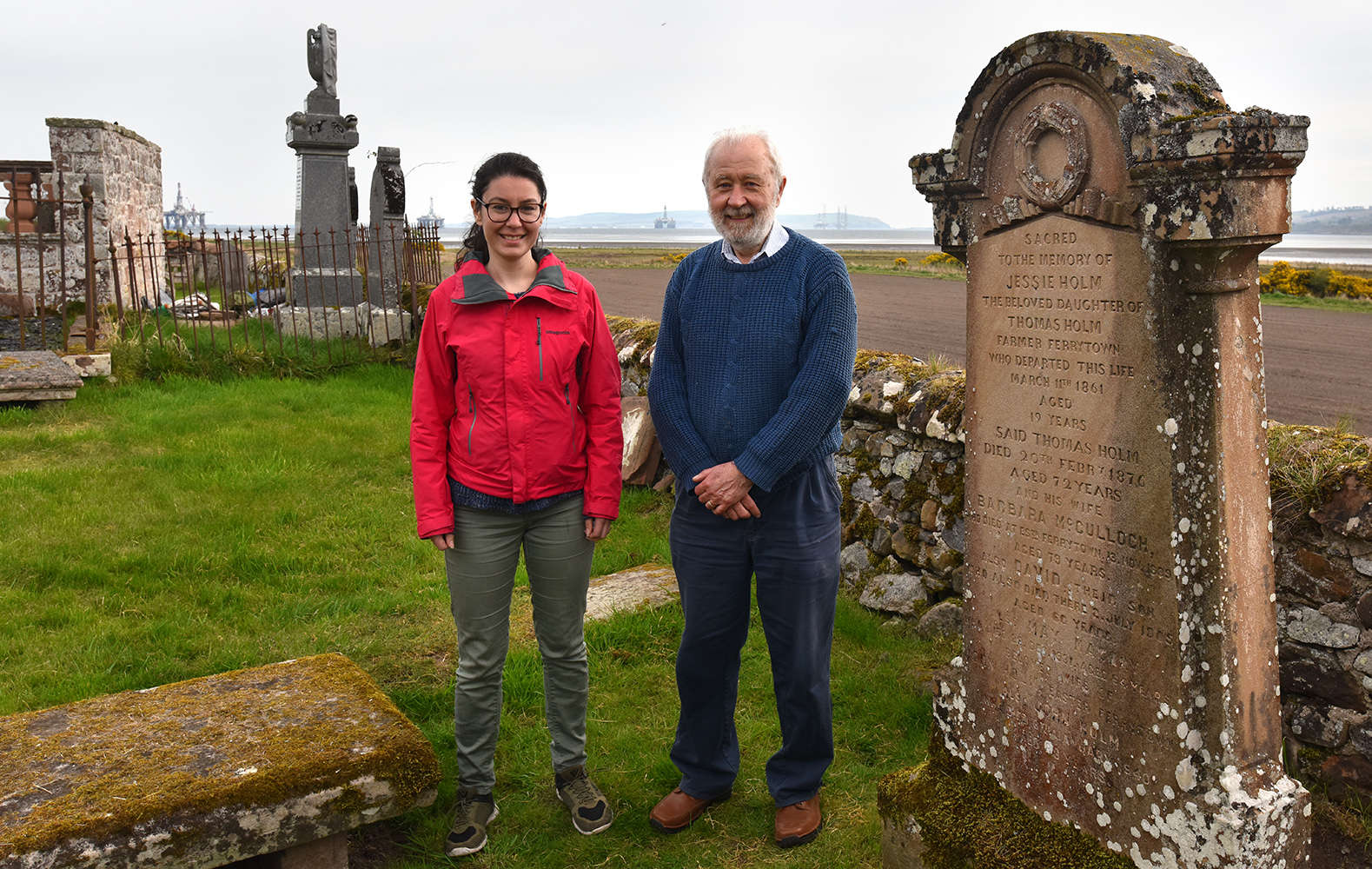 A family with such Black Isle continuity would certainly be the one to retain the oral tradition of a local narrative song, sung at musical evenings and ceilidhs down through the generations. The tune was to the old folk ballad Sweet Betsy from Pike, which in turn was based on Villikins and his Dinah, popular in music halls in the UK in the 1850s. The tune was used in many folk songs and may be much older than the 1850s! Sweet Betsy from Pike featured, curiously, in the Paul Newman/ Robert Redford/ Katharine Ross version of Butch Cassidy and the Sundance Kid.

So in an unusual “Story behind the Stone”, we will travel up the Firth a verse at a time!

The Story of ‘The Saucy Kate’ 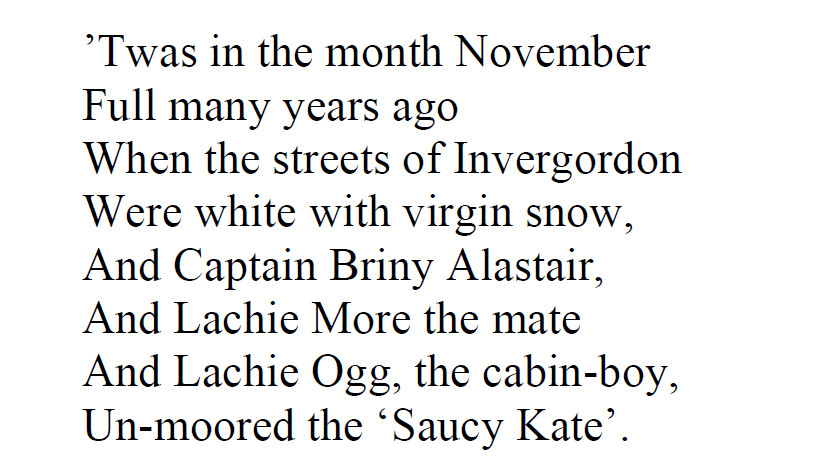 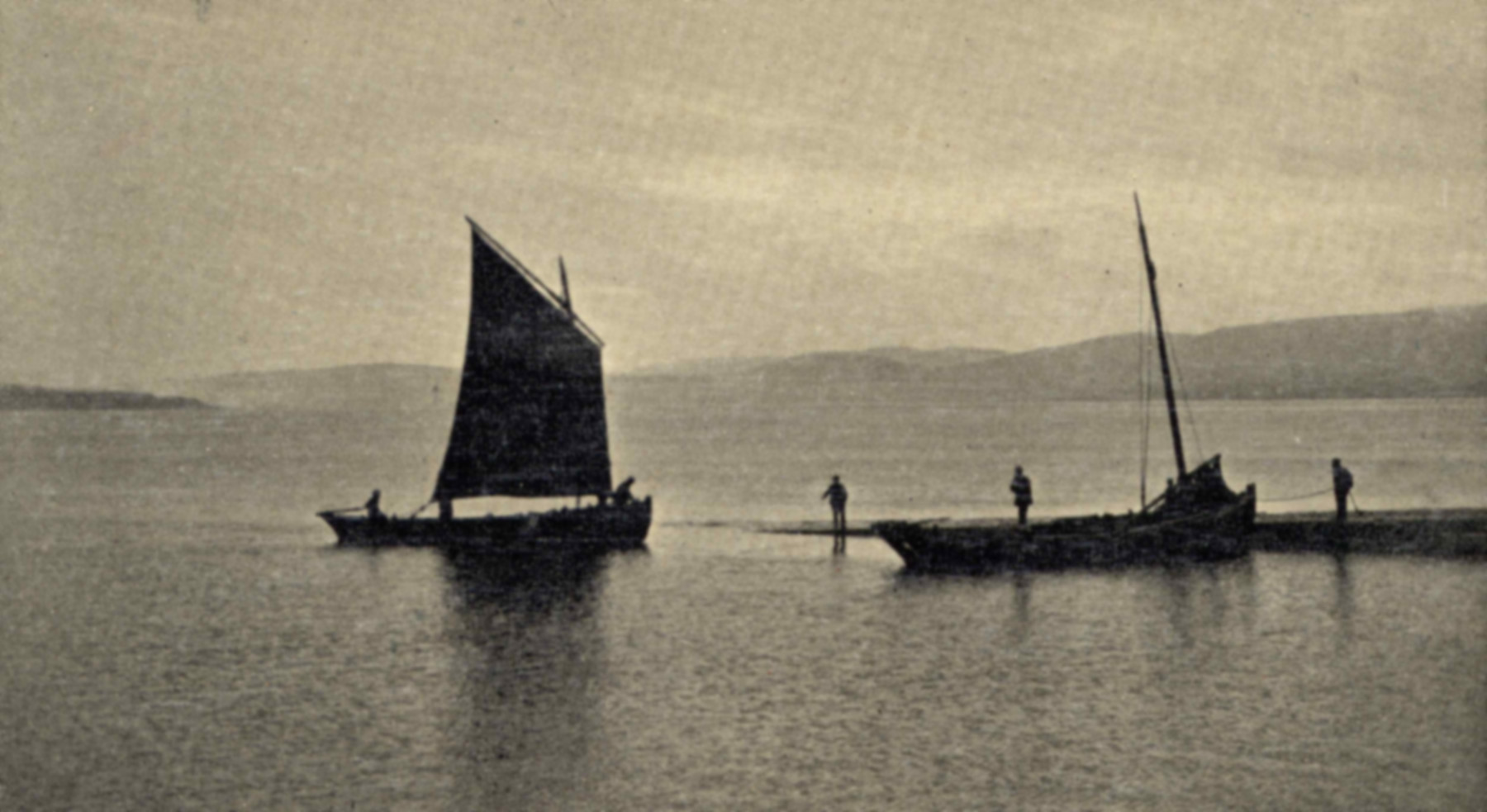 at Invergordon Ferry, looking up the Cromarty Firth towards Dingwall 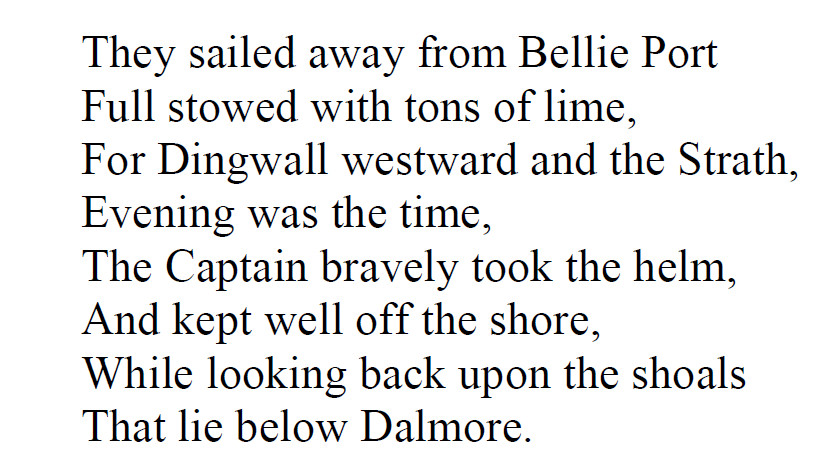 Belleport Pier, constructed around the 1830s by Thomas Telford initially for the purpose of exporting timber from the Ardross Estate 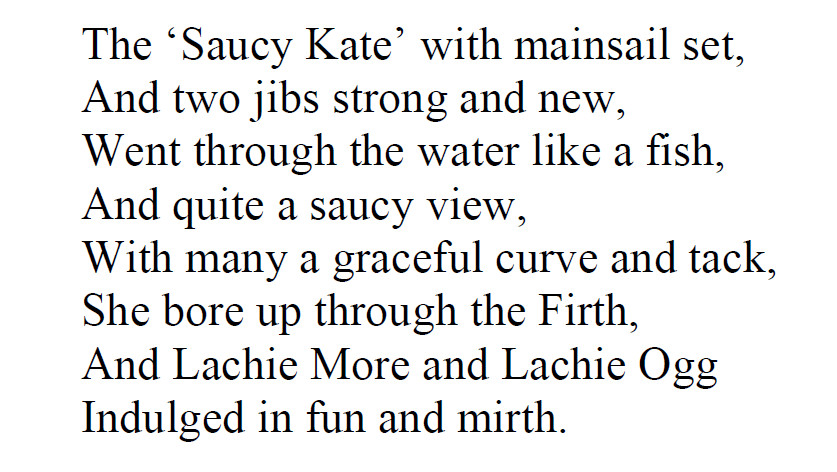 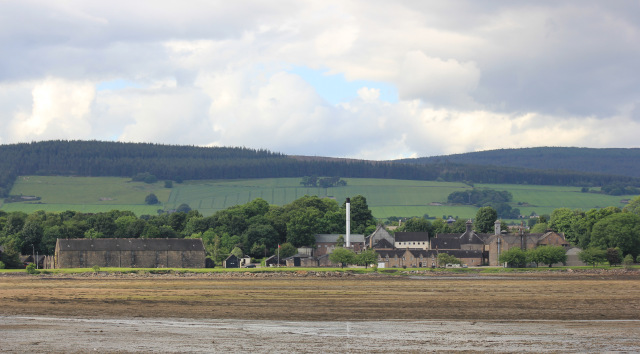 Dalmore, from the jetty 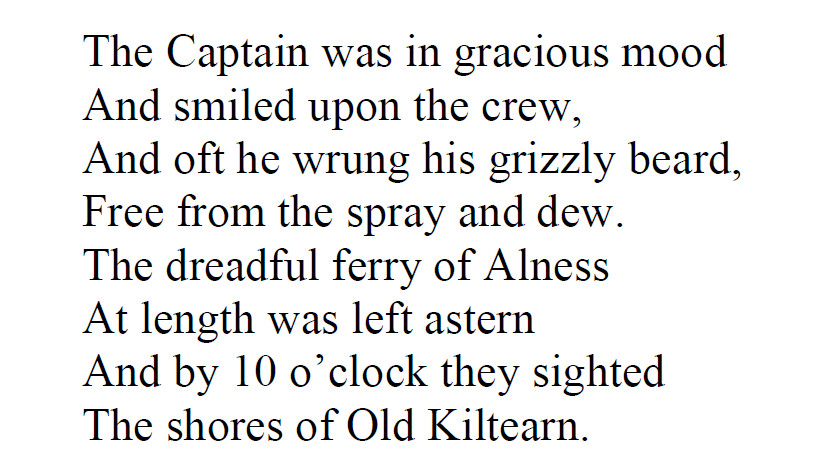 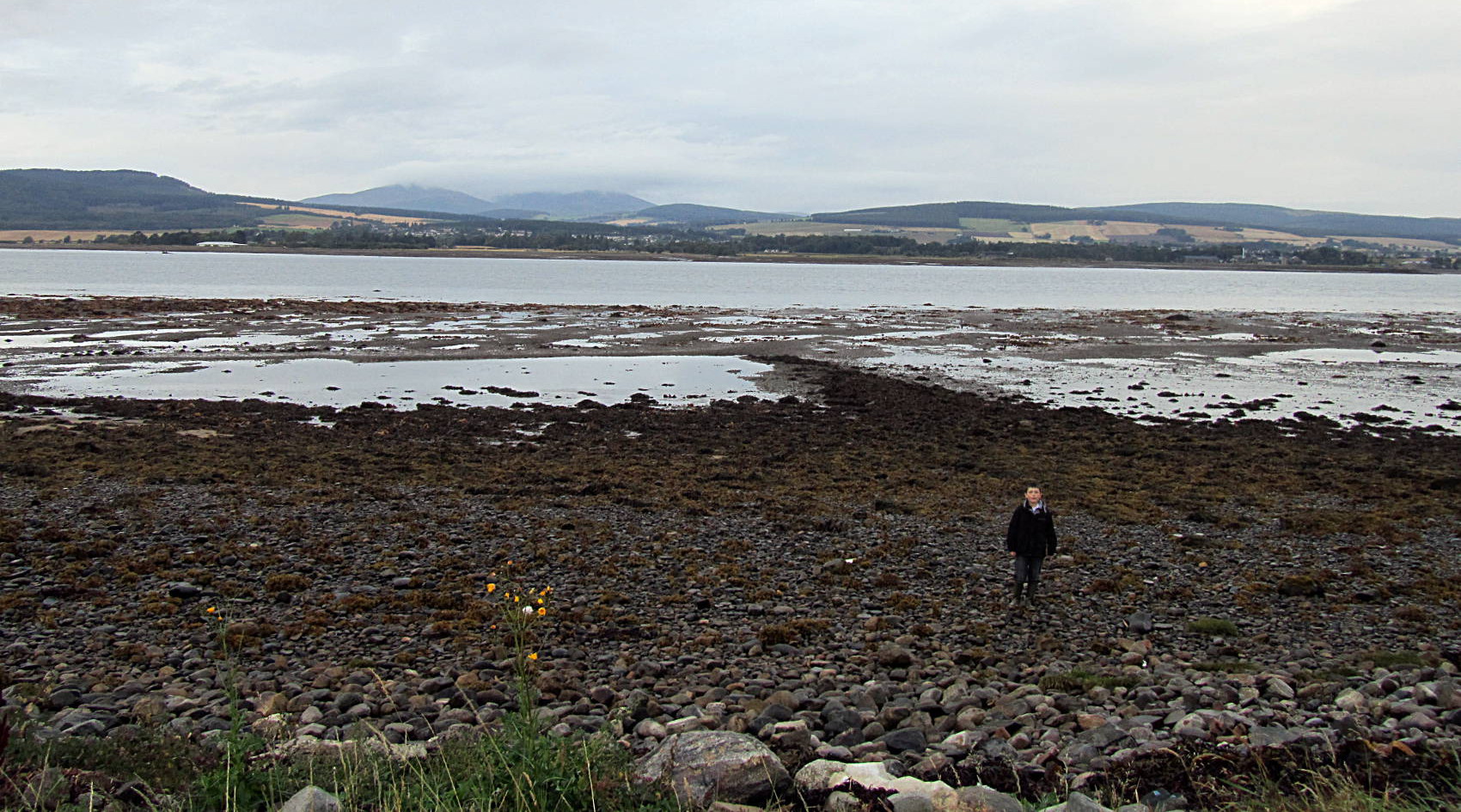 The remains of the pier at Alness Ferry in the Black Isle; photograph by Jim 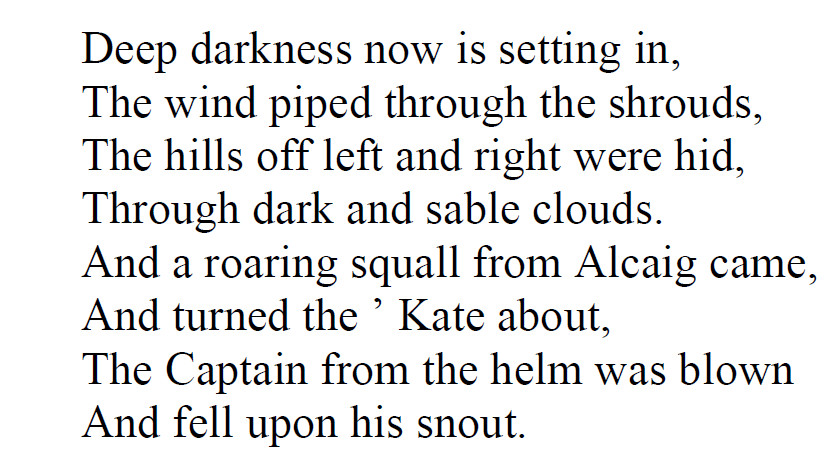 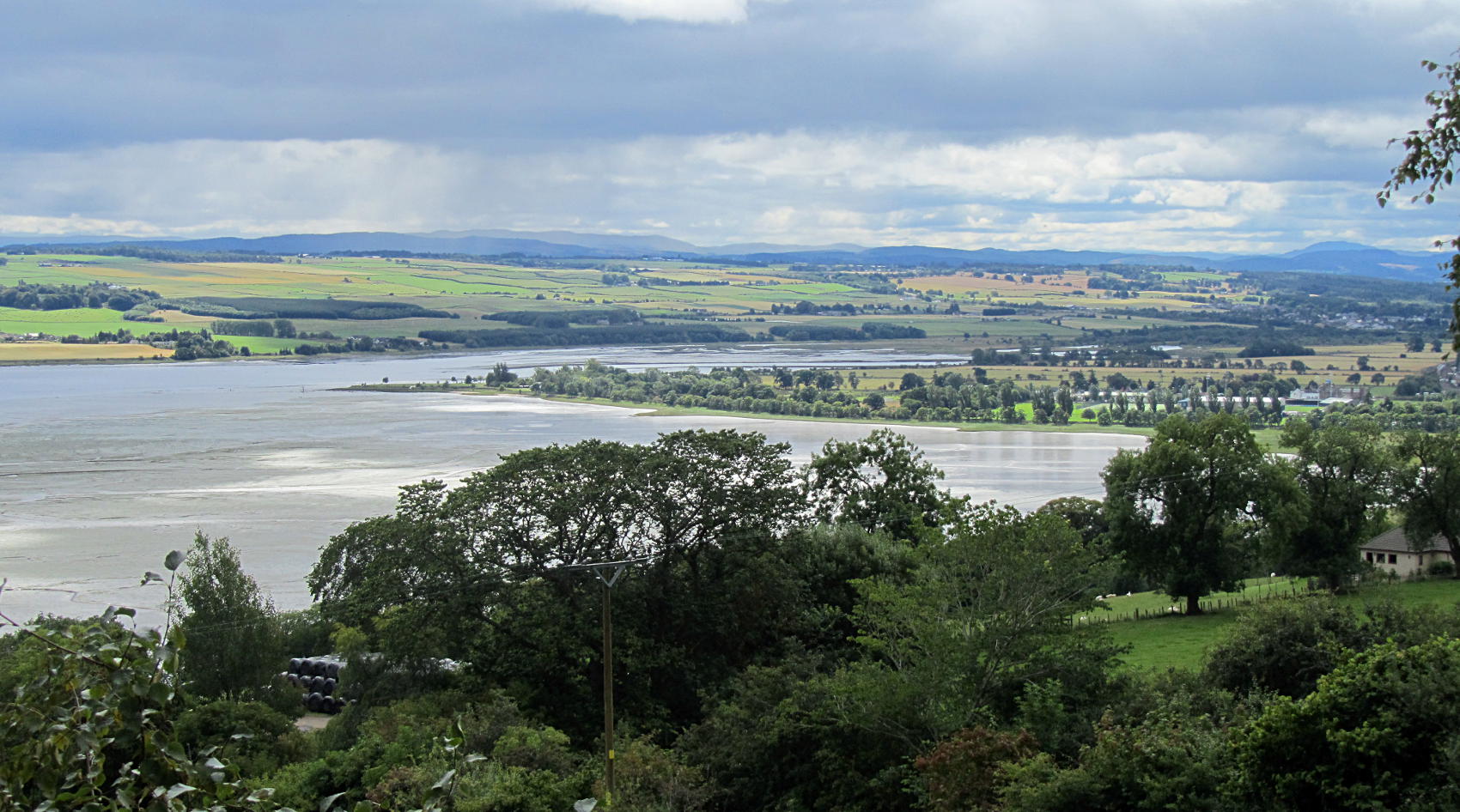 Looking across to Alcaig from the top road to Evanton; photograph by Jim 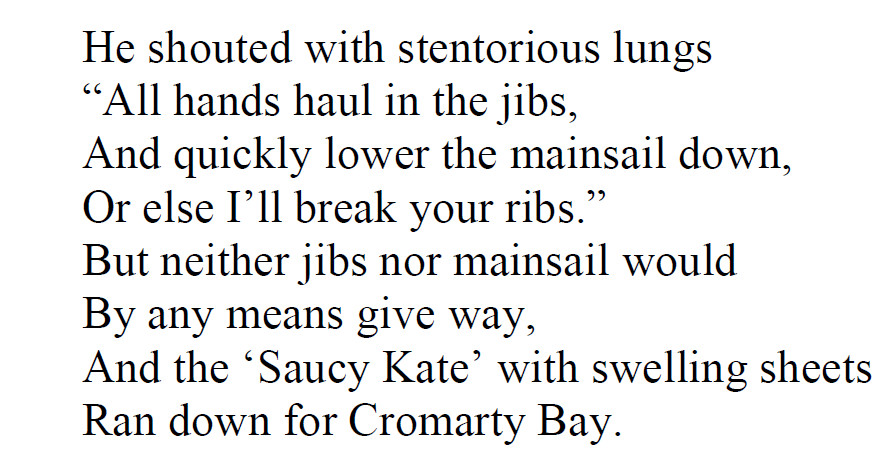 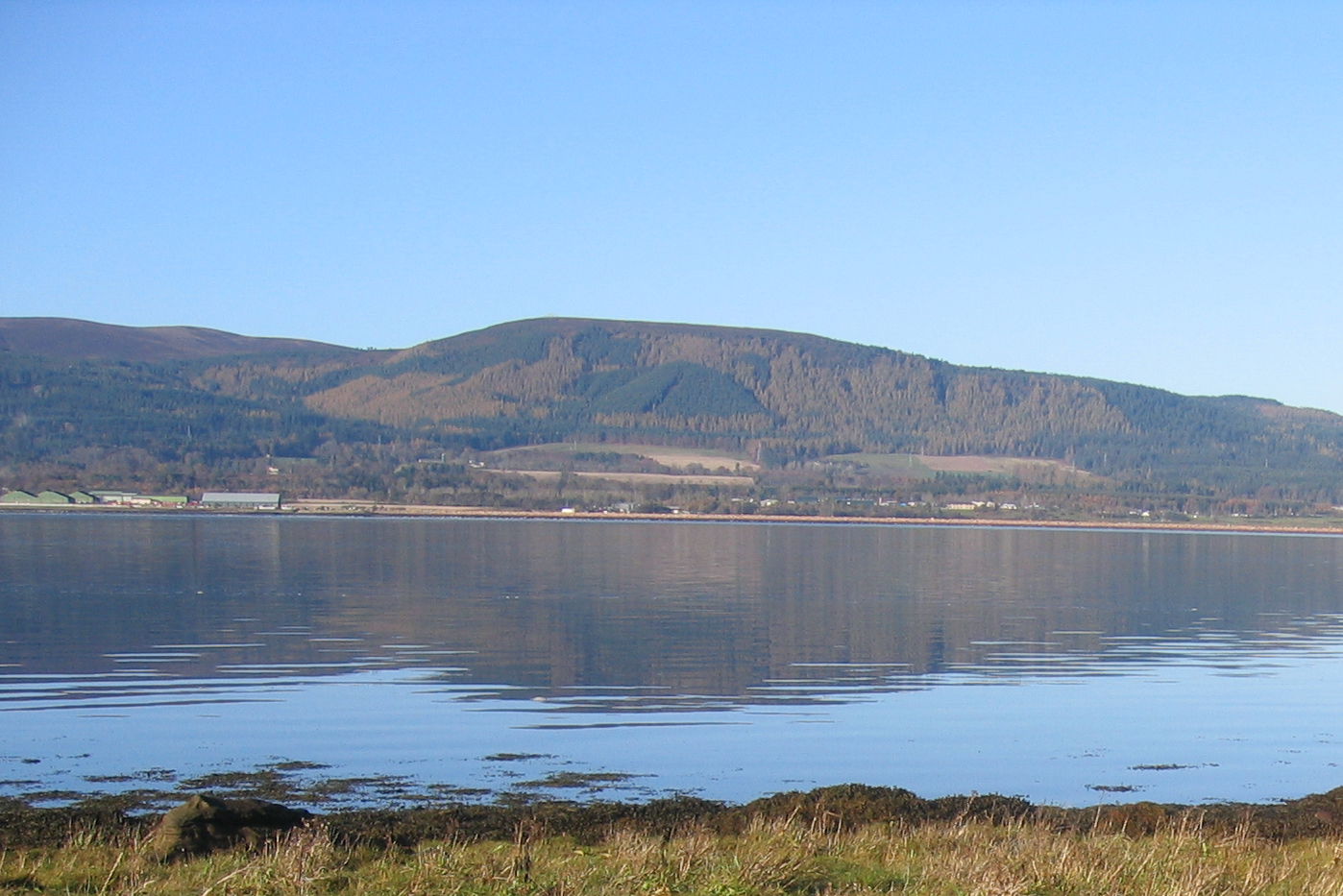 The Cromarty Firth in still mood; photograph by Jim 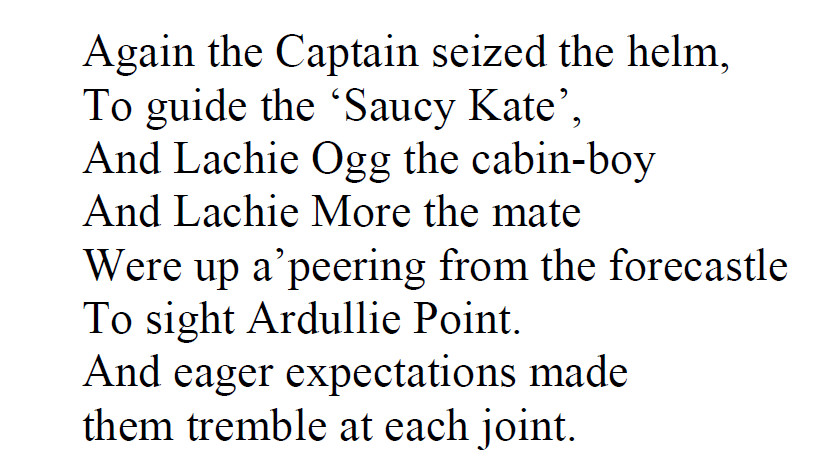 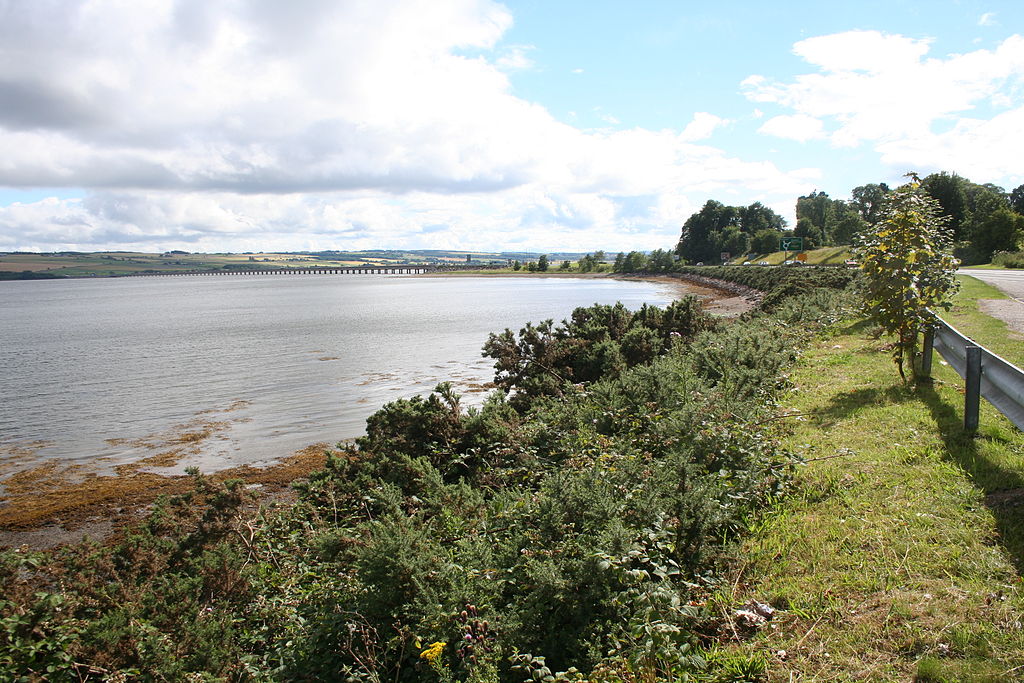 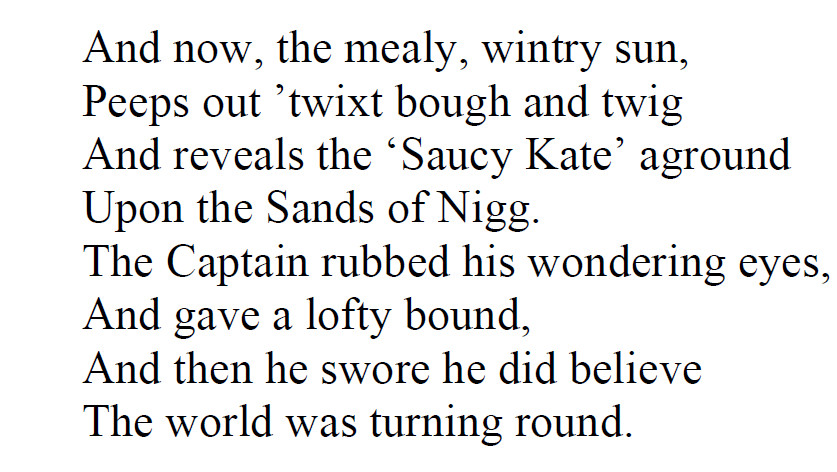 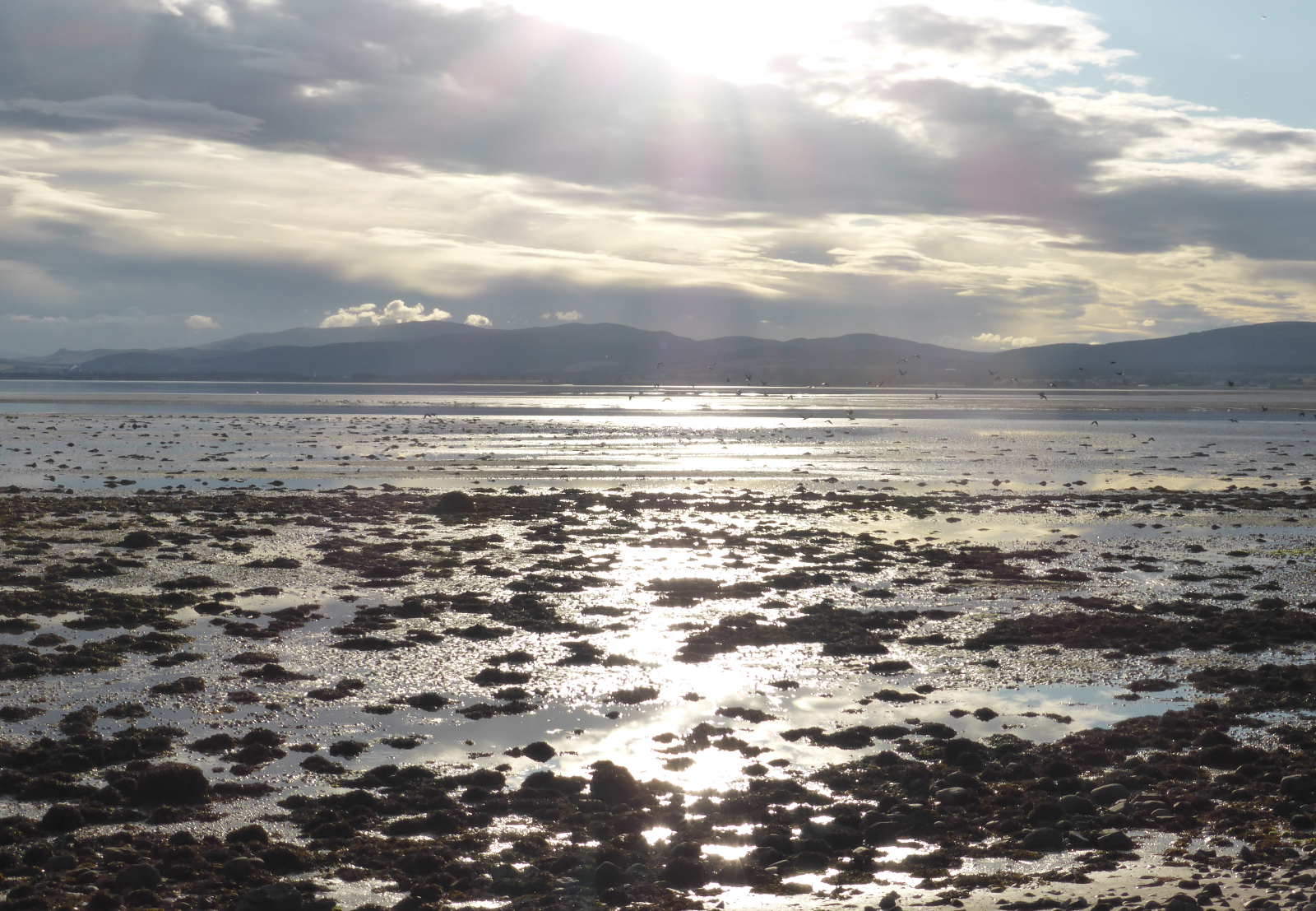 The Sands of Nigg; photograph by Davine Sutherland 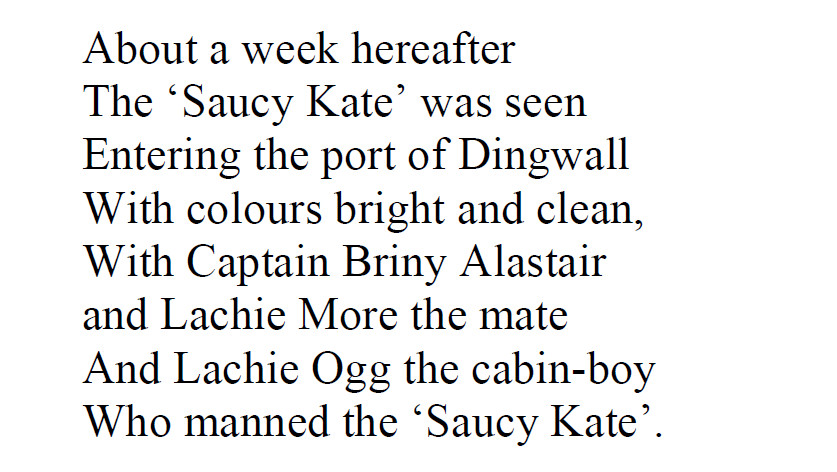 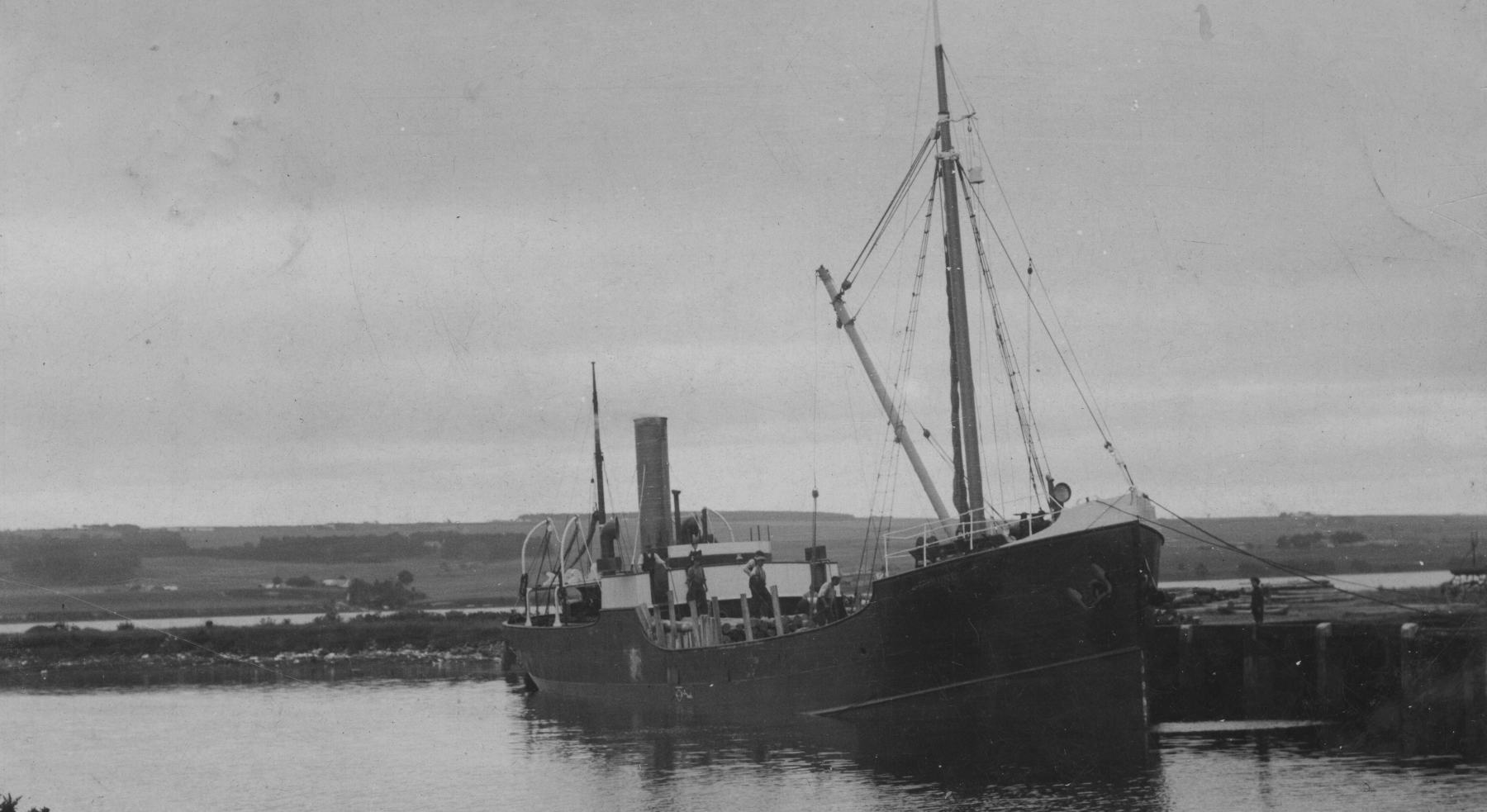 And so the Saucy Kate eventually arrives with her crew and, presumably, her cargo of lime at the original intended destination of Dingwall! As I say, I don’t know if it is perfect yet. The place named in the final line of the fourth verse in Genevieve’s copy was “Long Kilcurn” but I have renamed to “Old Kiltearn” as it fits rhyme and location but I would be interested in comparing versions! One reader has suggested that perhaps the fourth line of the third verse should read “As white as a Seamew” and it is true that the line as written does not feel quite right. For the final line of the final verse in two variants I have both “Aboard the Saucy Kate” and “Who manned the Saucy Kate”. But apart from these minor points we can safely say the Saucy Kate has re-emerged triumphantly!