There are representatives of not one but two branches of the Sutherlands of Uppat buried at Kirkmichael, but the only memorial of any kind is the handsome bronze plaque attached to the high wall erected to form the northern wall of the Sutherland of Flowerburn enclosure. The plaque had fallen off in the 1990s, but the Trust reattached it to the wall in 2018.

The Sutherland Plaque at Kirkmichael

It incorporates the symbol and motto of the Sutherland family, a wildcat sitting erect and "Sans peur" or "without fear" (my daughter Kirsty and I think, in the best tradition of mottos, that this is a marvellous pun on the mistaken belief that wildcats cannot purr), and reads:

James Sutherland worked for many years within the Public Works Department of the Government of India before returning to the UK. He purchased Flowerburn in the 1920s. His wife, Norah Kathleen Karine Dawson, became very active in the community, acting as President of Rosemarkie and Fortrose WRI in the 1930s.

The whole family line is of great interest and can be summarised in the following diagram.

A photograph of James Sutherland of Flowerburn mixing with other worthies associated with the Fortrose and Rosemarkie Golf Club can be found in a book commemorating the history of the club. 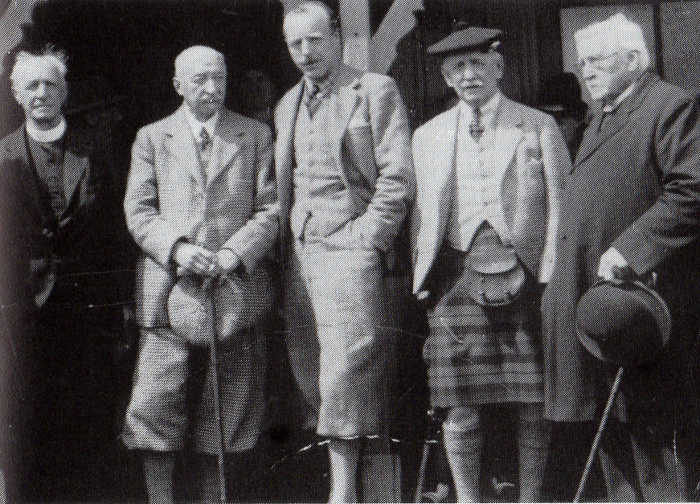 James Sutherland of Flowerburn in the kilt, with, from the left, the Reverend John Dow,
Sir Hector Munro of Foulis, Mr C.J. Shaw-Mackenzie of Newhall and Mr John Henderson 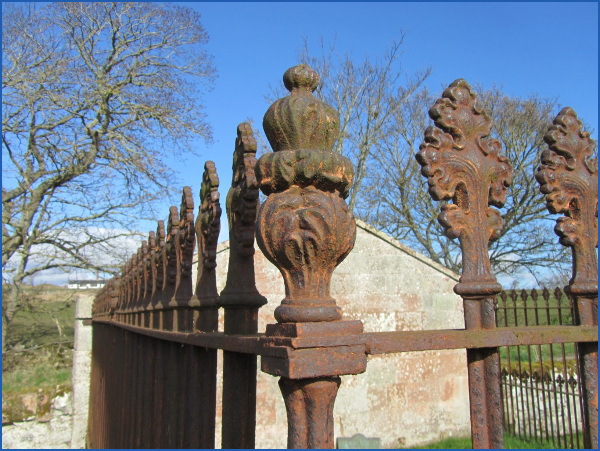 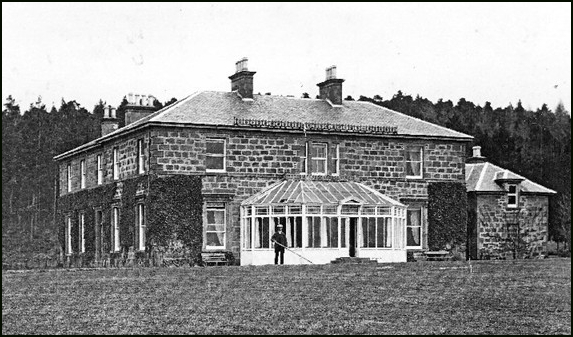 Sadly Flowerburn House is no more due to being due to being destroyed by fire. Estate houses associated with the Sutherlands have had an unfortunate tendency to burn down – Udale House is no more due to fire. And the old family home of Uppat House, near Brora, was also largely destroyed by fire as recently as 2007, although it at least has been rebuilt, albeit on a smaller scale.

The brother of the West Indian Planter, James Sutherland (1794–1841), also had very strong local connections. He was Captain George Mackay Sutherland of Udale (1798–1847). When he moved into the area, he at first lived in Braelangwell House in the parish of Resolis, perhaps because nearby Udale House in the parish of Cromarty was being done up, and they worshipped for several years in the Church of Scotland in Resolis. 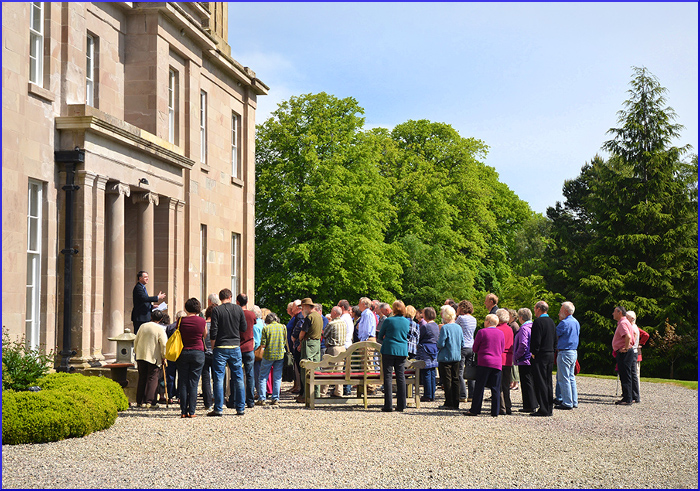 George Mackay Sutherland and wife, Elizabeth Walker, are recorded as communicants in the Resolis Communicants’ Rolls of 1830 to 1832, but on the Kirk Session record for 24 July 1833 there is reference to several people coming off the Communicants’ Roll including: "Capt Sutherland formerly residing at Braelangwell but now at Udol in the parish of Cromarty and Mrs Sutherland his Wife". 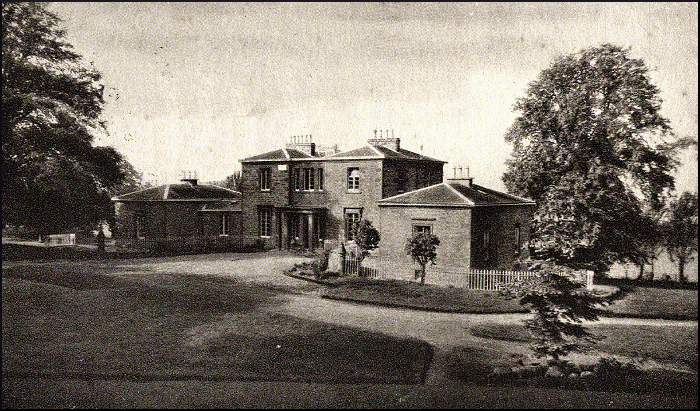 Mackay Sutherland of Udale was a keen sportsman, and maintained a pack of harriers at Udale. They seem to have been known as “The Black Isle Harriers”. This, from the Inverness Courier of 3 January 1838:

Sporting.– We understand the Union Harriers met near Ardersier Church on Friday, shortly after ten o’clock. The gentlemen engaged in this bracing and invigorating sport, have on several occasions lately taken the field in full force and with much success. The Black Isle Harriers lately threw off at Kilbockie, and had excellent sport. “The Black Isle,” says a correspondent, “is a fine hunting country; the ground is open and no cover intervenes. The pack of harriers, although limited in number, is very select, and the dogs are first-rate. Kelly, the huntsman, is well up to his business, and the amateurs in harrier-coursing all around are greatly indebted to Captain Sutherland of Udale, the owner, for his obliging and sportsmanlike kindness, in affording this amusement, as well as for his attention and courteous conduct on the field.”

Sutherland did not limit his practice of this cruel sport to the Black Isle. He took his harriers north with him when visiting Caithness in 1839, with the John O’Groat Journal reporting that &quotSaturday was the first grand field day of our Caithness sportsmen, with Captain Sutherland of Udale’s fine pack of harriers. The day proved a tolerably good one, and some excellent sport was obtained, though there was no lives lost. ‘Puss’ got off scaithless. There was a considerable field of horsemen, but though there were several hares started, the dogs did not lie so well to the scent as on the Tuesday, which proved a still better field day. The master of horsemen too on that day was more numerous than on Saturday; not less than twenty being in the field, as also a great many amateurs and spectators on foot. The dogs behaved particularly well, and there was one particularly fine run of from eight to nine miles."

I note that, reciprocally, Sutherland obtained in 1836 a game licence for the young Kenneth Macleay of Newmore and Keiss, who ordinarily lived in Caithness, to shoot on the lands of Udale.

Not just a sportsman, Mackay Sutherland took his local responsibilities seriously. He was the Convener of the Cromarty County Commissioners for many years, until he sold Udale in 1845. Indeed, he had been making some tentative moves to stand against the famous James Loch for the Northern Burghs (Wick, Dingwall, Dornoch, Kirkwall and Tain), but this was abandoned upon the sale of Udale. In his day Udale, though a small estate, was famous for being well-cultivated. The Second Statistical Account for the parish of Cromarty states: &quotGeorge Mackay Sutherland of Udale … The highly cultivated property of the latter gentleman, one of the most beautiful in this part of the country, contains about 500 [acres]."

Captain Sutherland of Udale was the President of the Black Isle Farmers’ Society when the very first Black Isle Show was held. The Inverness Courier of 26th October 1836 reported how he helped to sponsor the prizes, presided over the banquet held in Fortrose after the first show, and remarkably was one of the winners at the show: “Capt. Sutherland of Udale, for the best boar.” 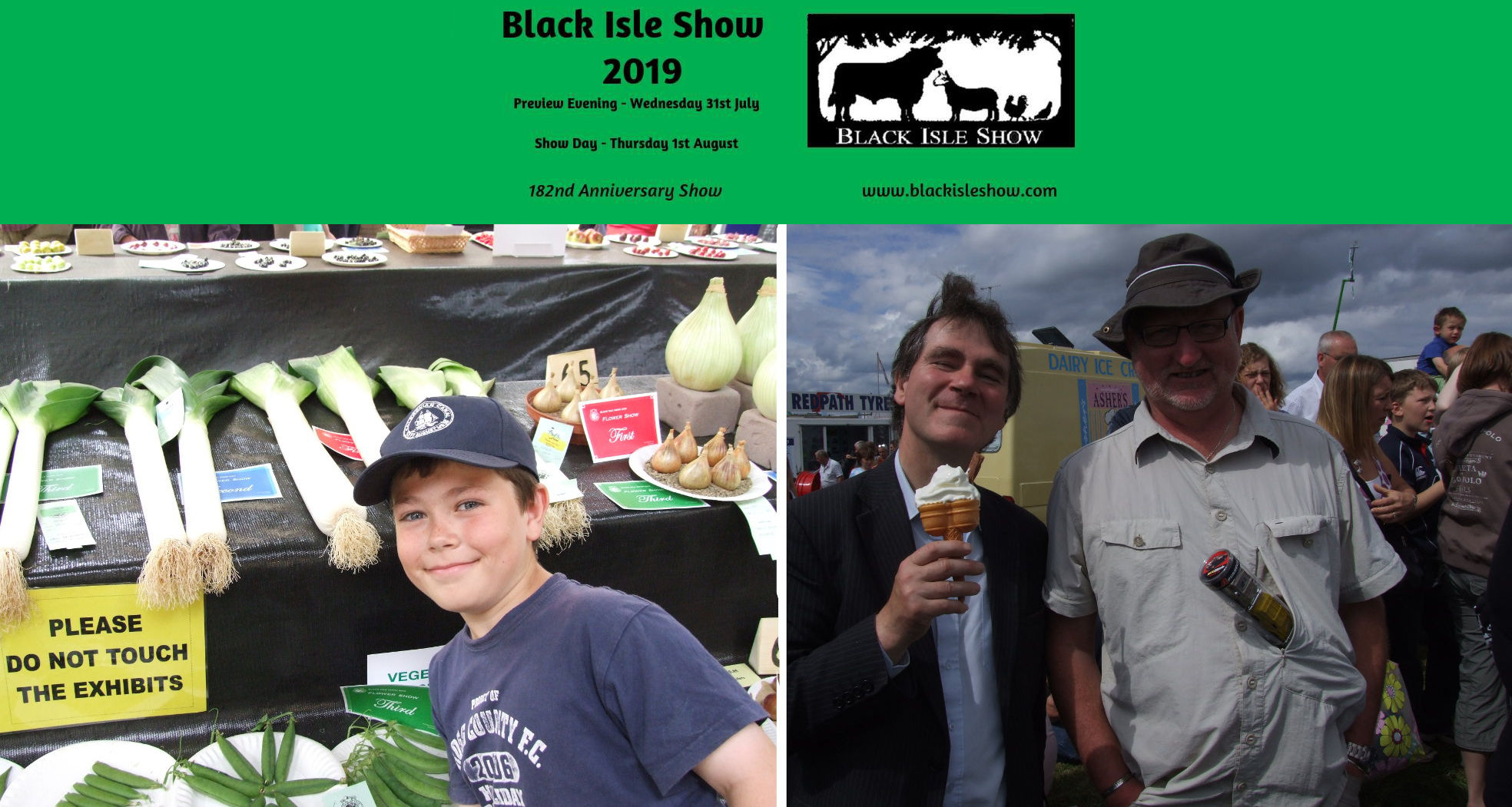 The Black Isle Show in more modern times when it aims to be a fun day out as well as an exhibition of farming equipment and stock. Photos by Alexei of good Gavin, yrs trly and the redoubtable Tom Anderson from Barbaraville. 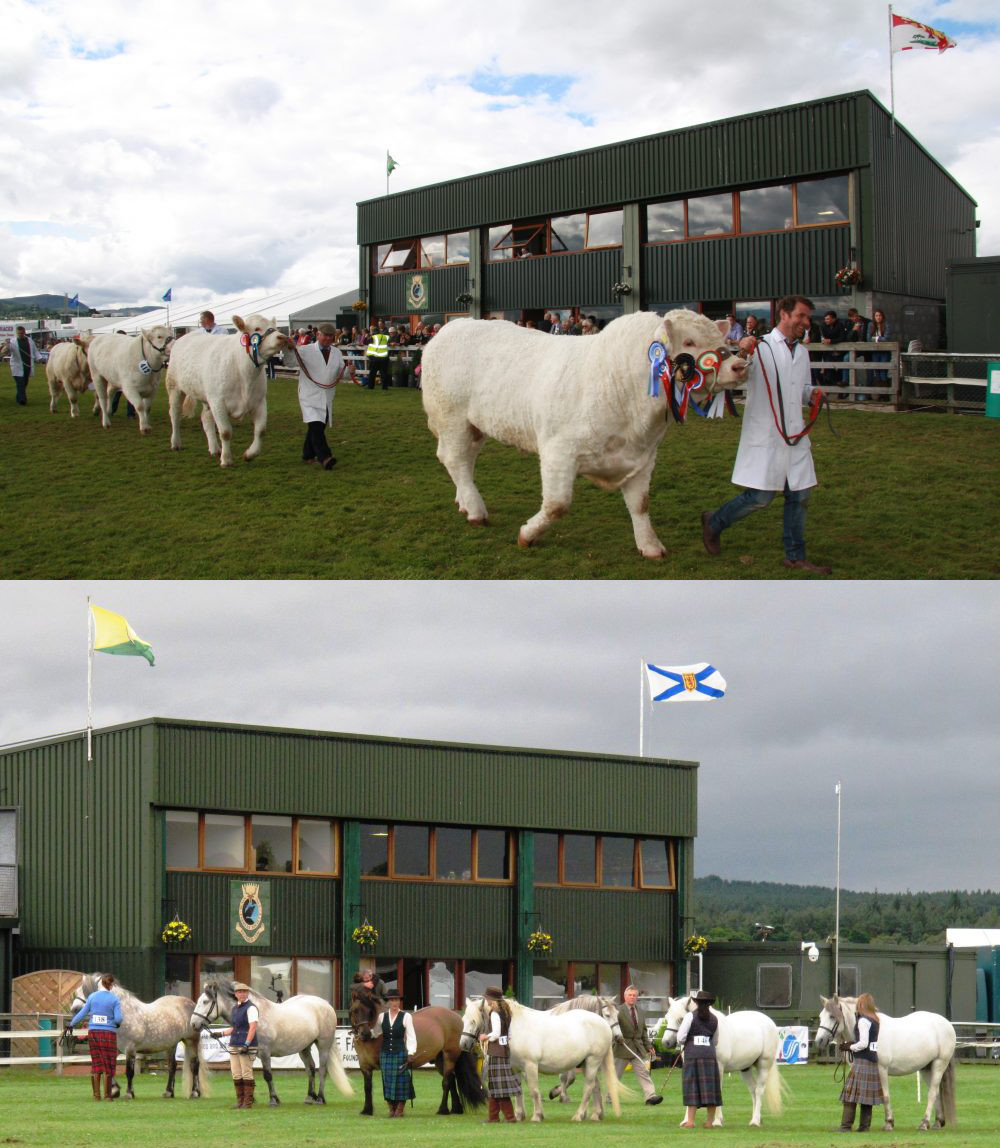 Cattle and horses have always been mainstays of the Black Isle Show, and there were prizes for best of both back at the very first one in 1836!

The original site for the Black Isle Show was the Cathedral grounds in Fortrose, but nowadays it is located in its own Showground at Muir of Ord. The prizes at the first Show in 1836 were funded by donations from a dozen local lairds and other gentlemen, and the Courier stressed “So that this society, which is only in its infancy, augurs well for future prosperity, and that its funds will increase under the exertions of its president, Captain Sutherland of Udale, with whom the gentlemen of the Black Isle so cordially co-operate in forwarding its views.” However, Captain Sutherland was accumulating personally considerable debts, debts to which we shall return. 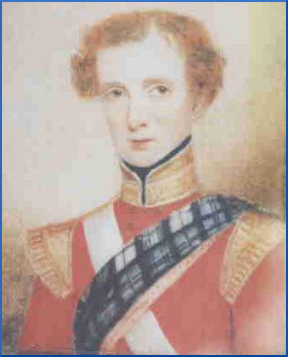 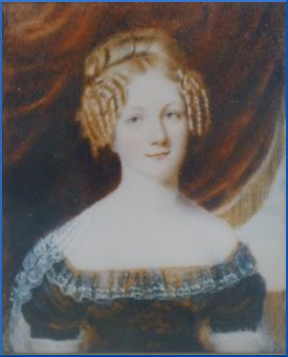 George Mackay Sutherland of Udale and his family were to move away from the area to live in Yorkshire although purchasing the Inverness estate of Aberarder. He died as a relatively young man in Halifax, Yorkshire. However, the family relationship with this area clearly remained, with James Sutherland of Flowerburn in due course being buried in Kirkmichael.

We do not know where the graves of Sutherland of Udale’s children are located within Kirkmichael, but it is intriguing to wonder if the big Flowerburn enclosure on the north wall in which James Sutherland of Flowerburn is buried, with its simple bronze plaque commemorating him and his wife, may be the final resting place of the young Sutherlands from two generations earlier.

Gentleman Jack and the cellars of Shibden Hall

I am grateful to my cousin Jock Holm in Leeds for pointing out to me that Ann Walker, the sister of Elizabeth Walker, George Mackay Sutherland’s wife, was the partner of lesbian land-owner Anne Lister (nick-named “Gentleman Jack”; now the title of the popular BBC television series about her), and they lived together at Shibden Hall. According to the television series, which is based upon Anne Lister’s diaries, Captain Sutherland was scheming to marry off his sister-in-law to clear his debts! When Anne Lister died, Ann Walker was given a life interest in her estate, but shamefully Lister’s relatives had Ann Walker, who did have mental health issues, declared insane.

Ann Walker’s brother-in-law, George Mackay Sutherland, became the tenant of Shibden Hall, and he re-married whilst he was there. Elizabeth Walker died in December 1844 (The Atlas 4th January 1845: “Sutherland, Elizabeth, wife of Capt. G. Mackay Sutherland, of Udale, North Britain, at Abbey-lodge, Merton, Surrey, on the 28th ult.”) and George Mackay Sutherland re-married a year later (Manchester Courier and Lancashire General Advertiser 16th May 1846: “On the 5th inst., at the Parish Church, Halifax, by the Rev. Dr. Bosworth, Capt. Sutherland, of Shibden Hall, near Halifax, to Mary Ann, eldest daughter of John Haigh, Esq., of Saville Hall, Halifax.”) 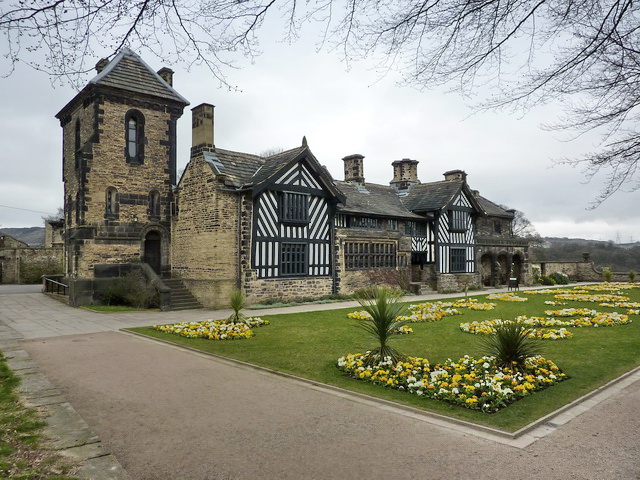 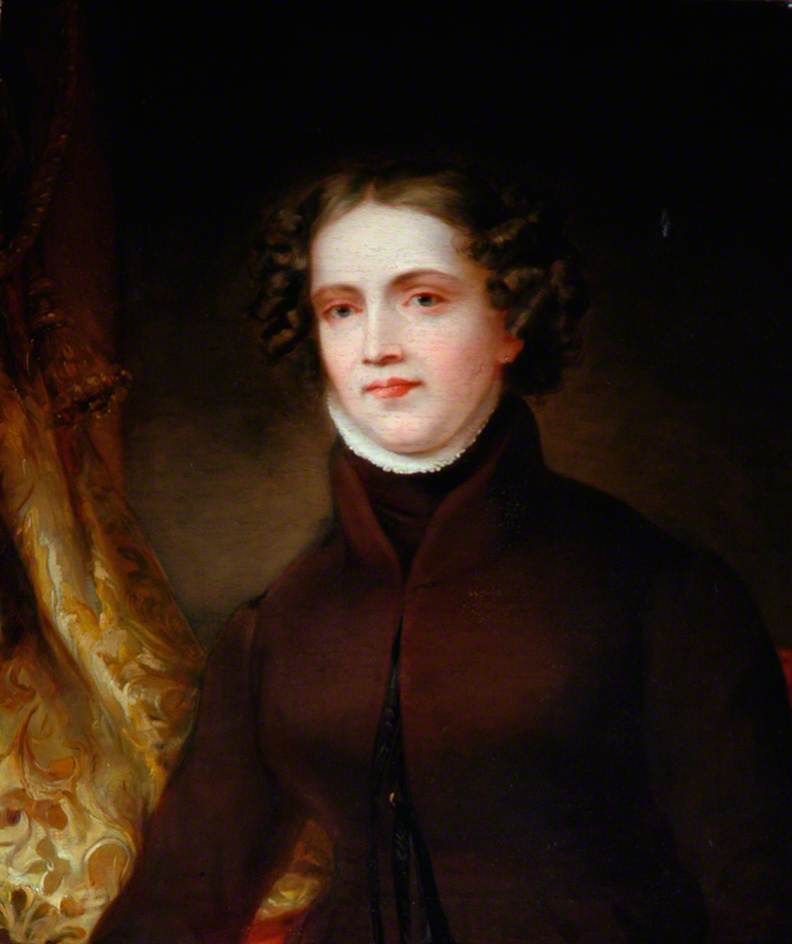 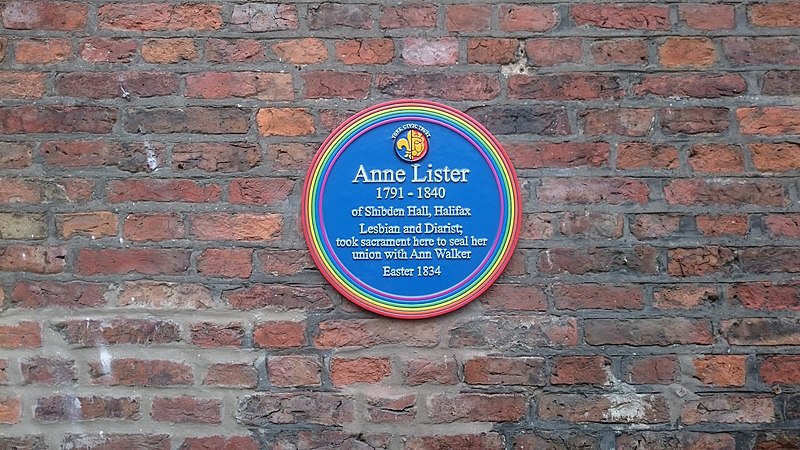 Rainbow plaque on Holy Trinity Church in York, where Anne Lister and Ann Walker took communion together in 1834 and thereby considered themselves married; source: Wikipedia

George Mackay Sutherland died at Shibden Hall on Thursday, 22nd April 1847. His well-stocked cellars at Shibden Hall appear to have been much raided, including, extraordinarily, both on his wedding night (on the occasion of his second marriage) and when he was lying dead in the Hall! The Leeds Intelligencer of 1st May 1847 held two separate items:

BURGLARY.– On Sunday night, some shameless villains effected an entrance into the cellars of Shibden Hall, and succeeded in carrying off the provisions contained in the well-stocked larder. At the time of the robbery, the corpse of the late lamented tenant of this ancient mansion, Captain Sutherland, who died on Thursday week, was lying in the house. The same cellars have been similarly cleared on four different occasions, and the last time was during the wedding night of the late gallant Captain about a twelvemonth ago.