Murdo Mackay, the shepherd from Lochcarron, and Ann Mackay his wife

text by Dr Jim Mackay; photography as given below each image

Murdo and Ann Mackay were part of an influx of West Coast families into the eastern parishes of Ross and Cromarty. They and their children arrived in Resolis from Lochcarron in the late 1840s. By 1851, there were 37 people who had been born in the parish of Lochcarron now residing in the parish of Resolis. 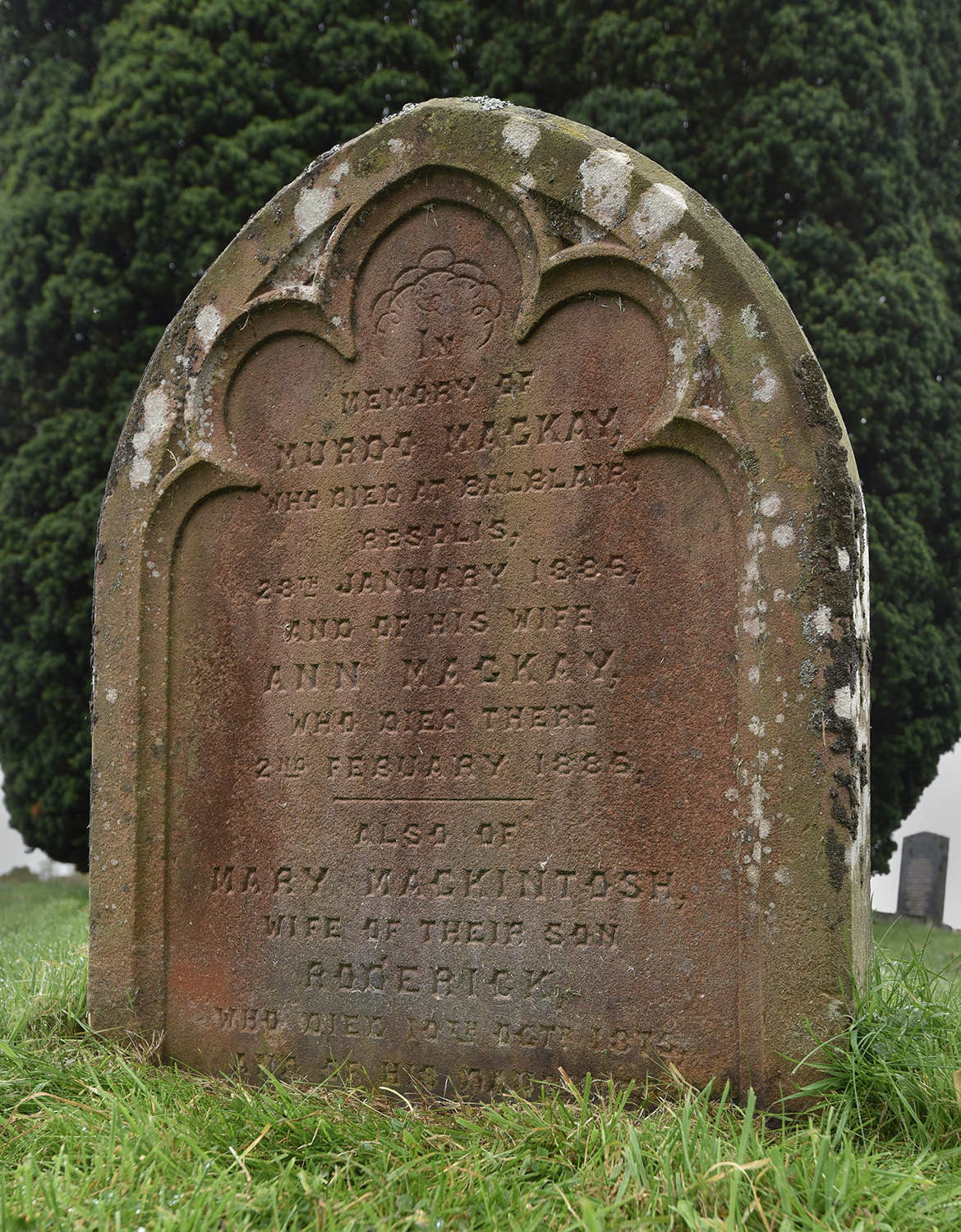 I have a personal interest in this influx, despite not being related (as far as I know) to Murdo and Ann. I have in a bookcase beside me the Mackay family bible. On the flyleaf my grandfather, Murdo Mackay of Alness Ferry, had written:

They also crossed the Highlands from the Parish of Lochcarron to Resolis. The tale passed down is that my great-grandfather and family, and a neighbouring family who came over at the same time, arrived here in Alness Ferry with all their worldly possessions in two carts. The Newhall Estate had granted them peppercorn rents while they broke in rough moorland, built their homes and steadings and carved out a new life in the Black Isle.

The story of Murdo and Ann Mackay from Lochcarron was a little different. Murdo was a farm servant – a shepherd, mostly, it would seem, a cow-herd at one time – and did not become a crofter in his own right. There is no evidence that he and my family were related – but then, the genealogical information from the Parish of Lochcarron is lamentable. Estate records are skimpy, and even the Church records are poor. As stated in the Second Statistical Account in September 1836:

Baptisms and marriages have been regularly registered since 1819. The register kept before that time was accidentally burnt.

We know little therefore about the early life of Murdo. We do know that he married Ann Mackay in 1836:

moorland at Attadale, looking across to the modern village of Lochcarron, then known as Jeantown; image by G. O’Ogle

From later information, I am aware that Ann had, in fact, been born in Comrie in the parish of Contin. Despite that, she does not appear in the Contin Baptism Register, but twins Roderick and Margaret do, baptised on 16 August 1818 to “Rodk. Mackay late at Comrie and Margaret Mackenzie” so the family had obviously moved at that time, perhaps even to New Kelso in the parish of Lochcarron. New Kelso lies just to the east of Attadale so it is no surprise that Murdo and Ann became acquainted.

Murdo lived on the Attadale Estate which at this time was not in the hands of the Mathesons, the traditional proprietors. For those who don’t know the often-told story, Alexander Matheson, later of Lochalsh, Attadale, and Ardross, and M.P. for the County of Ross, made his fortune through trade in the far East, including, it has to be said, opium. During his father’s lifetime the family had been, in 1825, reduced to selling Attadale, the last part of their heritable possessions, and Alexander had to make his own way in life. His uncle, Sir James Matheson of the Lews, Baronet, was the founder of the India and China merchant company of Jardine, Matheson, & Co., which Alexander joined. He later founded and become head of Matheson & Co., London. Rich, he returned to the Highlands and started buying back the family land and much much more besides, and was relatively benign towards his crofters.

But the proprietor of Attadale when Murdo Mackay was working there was the MacBarnet family, who had estates in St Vincent and Grenada as well as in Scotland. That meant, of course, interests in slavery. The tenants of Attadale were to be critical of the MacBarnet ownership at the much later Napier Commission, but how the MacBarnets behaved towards their tenants during the period when Murdo and Ann were establishing their family I know not. 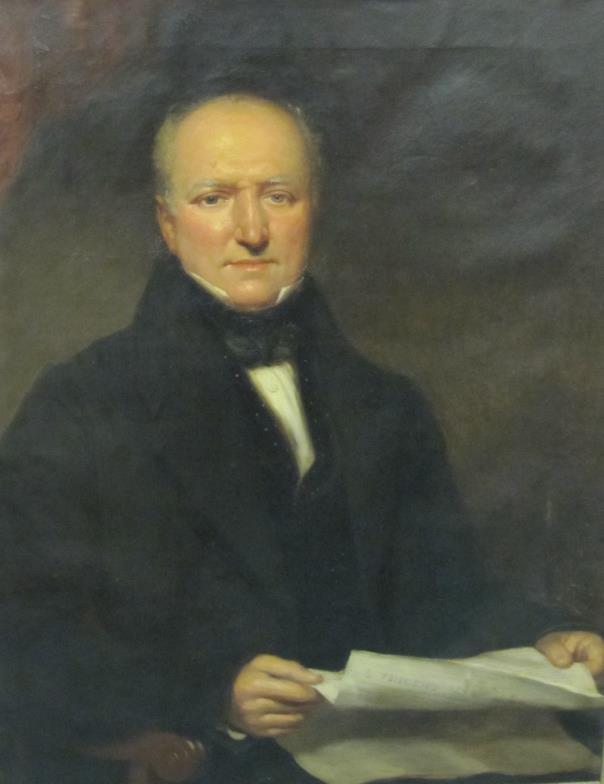 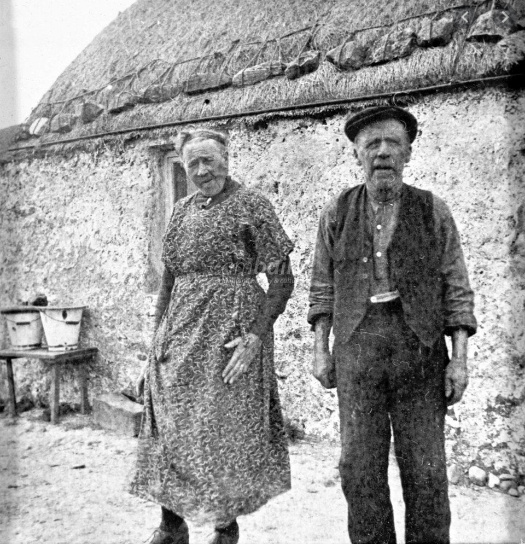 The Mackays were still in Attadale at the time of the 1841 Census with their first child, Margaret.

I calculate that it must have been somewhere between 1848 and 1851 that they moved to the parish of Resolis, and they appear here in the 1851 Census return at Gordon’s Mills. The adjacent two houses were empty, and I wonder if the rent of property in the hamlet at that time was particularly cheap in order to increase its popularity.

Anyway, one of their children appears in the Free Church Baptism Register for Resolis, in 1853, before Civil Registration started in 1855: 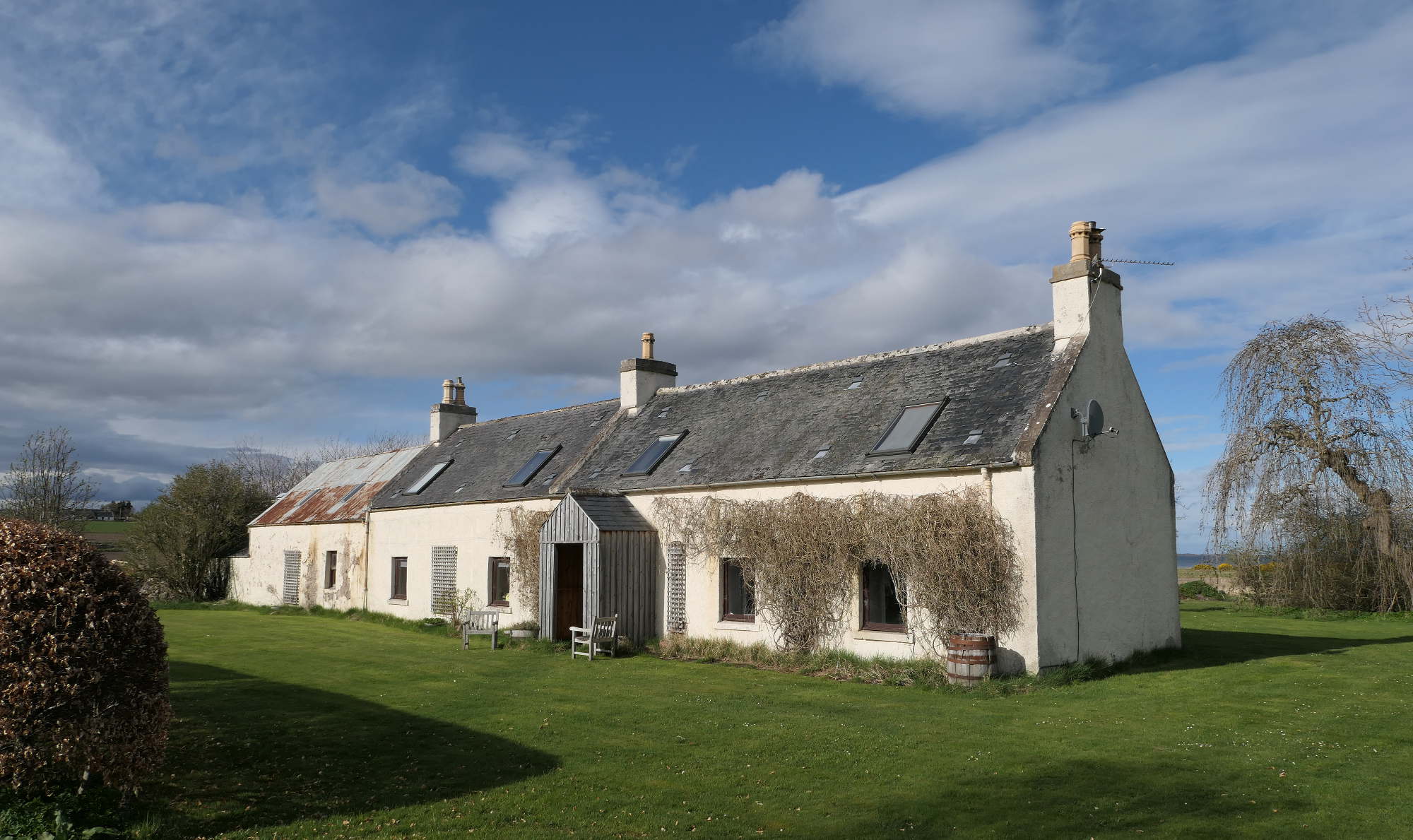 Old cottages at the planned village of Gordon’s Mills, where Murdo and Anne arrived; photo by Jim Mackay 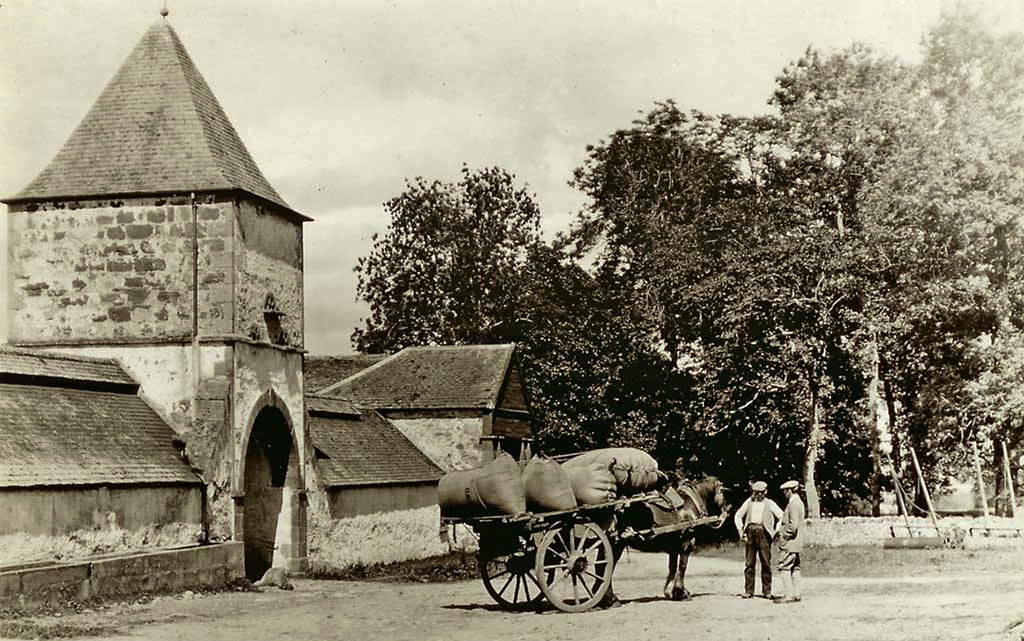 The family were thus now at Braelangwell, and they were still there when their final child, Catherine, arrived. She was born in 1855, that first year of Civil Registration in Scotland, when the attempt to record more information than any other country proved so difficult to sustain that requirements were drastically reduced in subsequent years. But we should be grateful for the information provided that first ambitious year.

The family moved to Balblair, where Murdo and Ann were to reside for the rest of their lives. They can be seen there in 1861, with children Margaret, Roderick, Duncan, Annie and Catherine, and in 1871, with only daughters Annie and Catherine left of the siblings at home, the others having flown the coop. In each of these Murdo is recorded as an agricultural labourer of very variable age – he was probably born about 1806 but clearly neither he nor anybody else was really very sure. Anne was probably born about 1816, and her age is more consistent in the Census Returns.

Poor Murdo was suffering badly from bronchitis at the time, although this name tended to cover a number of conditions. It was extreme enough so that in 1876 he was provided with Parochial Relief and thereby became a pauper, which is how he was recorded in the 1881 Census Return. That Census showed that daughter Maggie had returned home with her daughter, also named Maggie, and in house was one of the children of Roderick and his deceased first wife. I presume that the visitor was another relative. It was a busy household!

This was to be the last Census Return for both Murdo and Annie.

As Murdo was a pauper, much family detail was sought and included within the Parochial Relief records. At least part of the reason for this was an interest in the ability of other members to contribute to the upkeep of the pauper in the family. The notes with regards to Murdo are rather copious as the Board felt that some of the family should be assisting. The Parochial Records for some parishes are very spartan.

I shall mention Roderick further as I think it would have been he who erected the headstone in Kirkmichael. He had married Shieldaig girl Mary Mackintosh in 1871, when he gave himself as a labourer at Balblair (which is curious, as he had been working for the Highland Railway Company for several years by this time). As mentioned in the Parochial Record, he had became a railway porter, in Inverness, and resided there, though some of the children stayed with their grandparents in Balblair. Sadly, first Ann, one of their children, died at Balblair when only seven months old, and then a few months later his wife died. Both are commemorated on the family headstone in Kirkmichael. 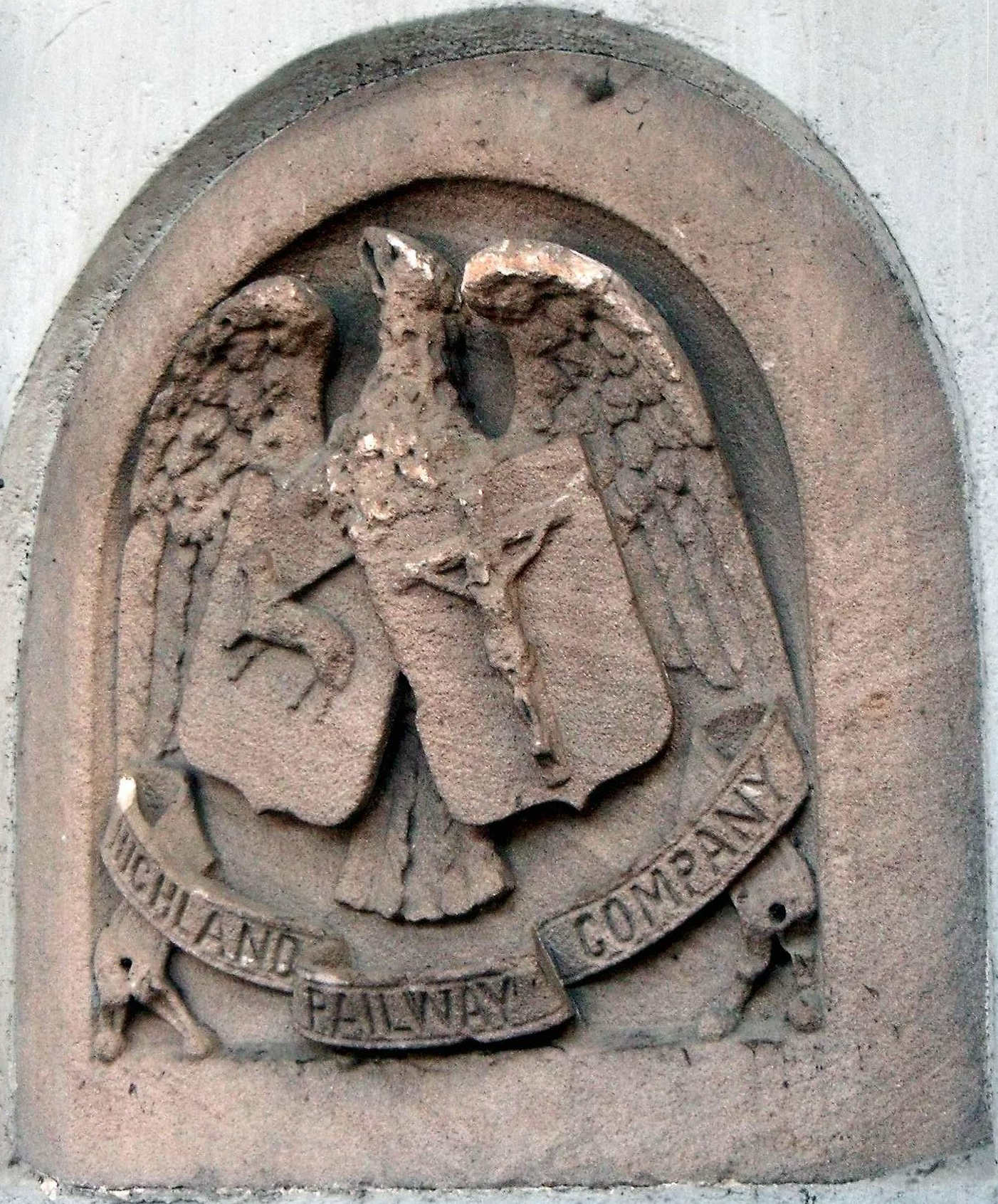 Roderick kept working for the railway virtually all his adult life, moving from Inverness to Muir-of-Ord to Kildary and finally to Forres, where he died as recently in 1931.

A most informative snippet in the paper on his retirement gives his story: 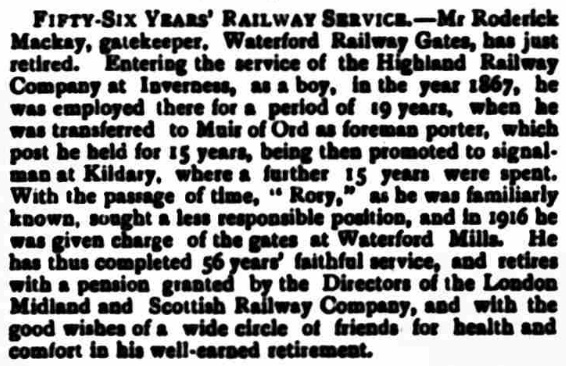 Alas, he did not enjoy his retirement for that long, as he died in 1931. Even then he was not far from the railway, as you will see his residence on his death certificate was “Waterford Railway Crossing”. I presume this was a railway company property. I note there is a wee cottage beside the level crossing at Waterford Mills and it would be nice to think this was the same cottage – perhaps some Forres historian can let me know!

That was Roderick, and I shall not follow the other children of Murdo and Annie Mackay.

Murdo and Annie themselves died within a very short space of time from each other in 1886.

Roderick provided a suitable memorial for his parents. I think we can assume from the wording of the inscription that he was responsible for it. And while he was engaged in the business of having a headstone inscribed, he had the mason record as well the deaths of his first wife and his daughter who had died a decade earlier.

Their memorial is good quality sandstone headstone in a prominent position beside the yews in Kirkmichael. Visitors pass close by it because it stands right beside the main path within the old part of the kirkyard. I think the attractive blind tracery effect carved around the inscription is to evoke the windows in a cathedral; Roderick was obviously determined to commemorate his parents with a distinctive and expensive stone. And so Murdo and Annie are buried here in Kirkmichael, having made a successful transition from the west coast to the Black Isle. Meanwhile, as was so often the case, the children moved away leaving none of the family in the parish. 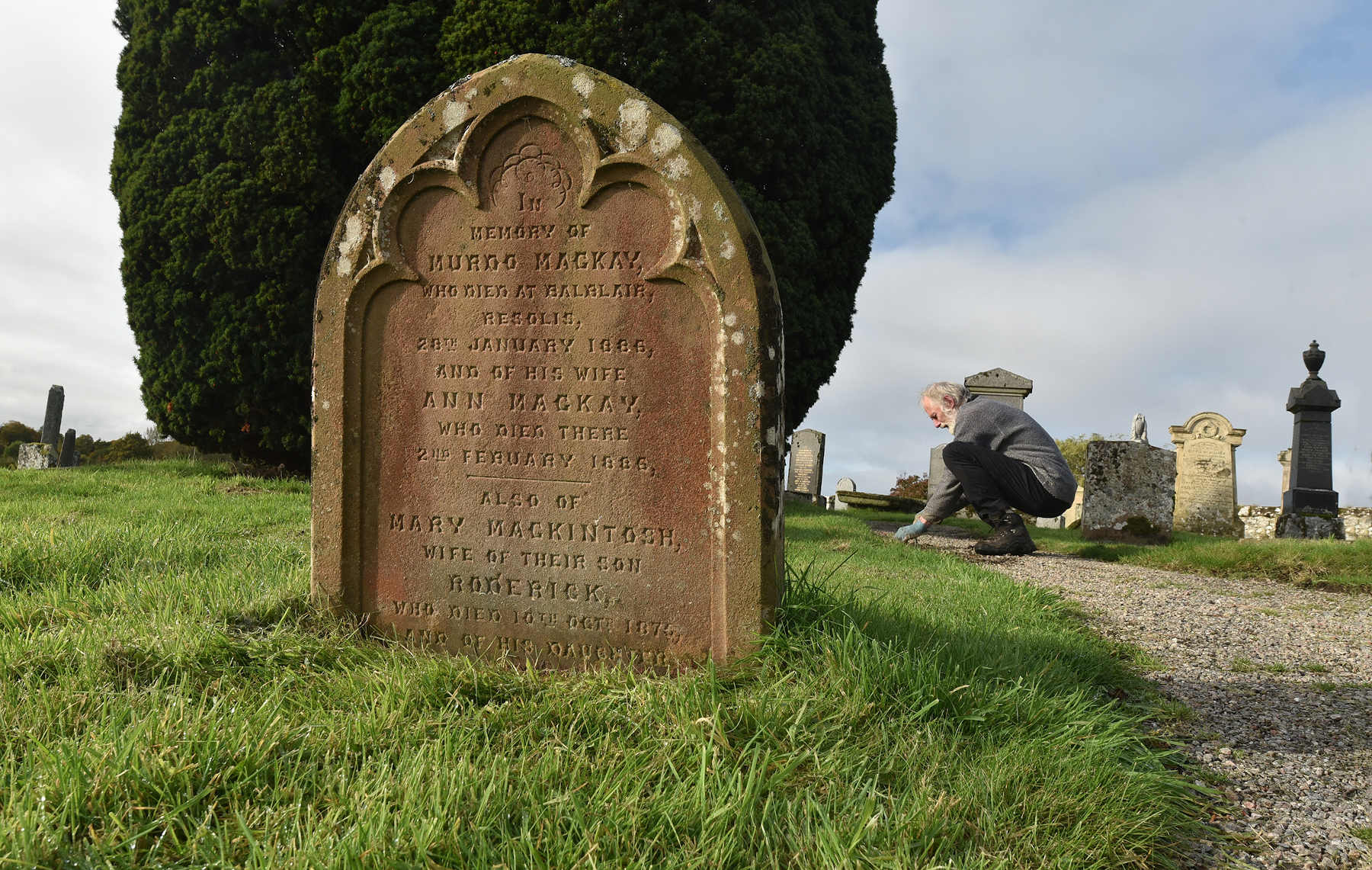 Volunteer Jonathan removes weeds on the path by the Mackay headstone; photo by Andrew Dowsett