text: Jim Mackay     photos: as given

Many visitors to Kirkmichael have remarked on the unusual nature of the Lady Ardoch Mausoleum, erected by Sir Harry Munro of Foulis. Even in the 1800s it stood out, with both Hugh Miller and the Reverend Donald Sage mentioning it. 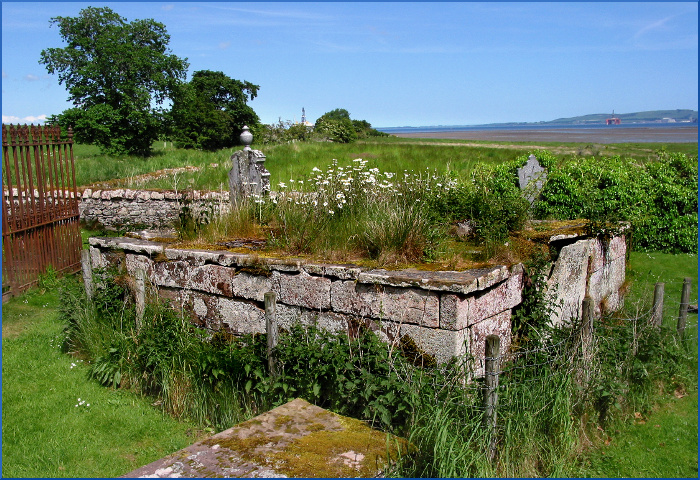 The Lady Ardoch Mausoleum prior to repair
photo: Andrew Dowsett.

Half-way between the chapel and the northern wall of the burying-ground, there is a square altar-like monument of hewn ashlar, enclosing in one of its sides a tablet of grey freestone. It was erected about sixty years ago by a baronet of Fowlis to the memory of his aunt, Mrs. Gordon of Ardoch, a woman whose singular excellence of character is recorded by the pen of Doddridge.

and Sage was to say (in his Memorabilia Domestica, published in 1889 but written several decades earlier):

Her remains are interred at Kirkmichael, in the parish of Resolis, and around them her nephew, Sir Harry Munro of Foulis, erected a square enclosure, filled up with lime and stone, in order to prevent any future interment at the spot. 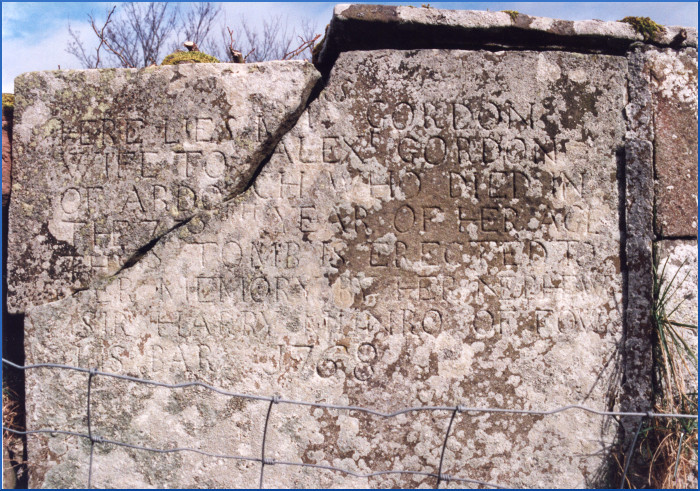 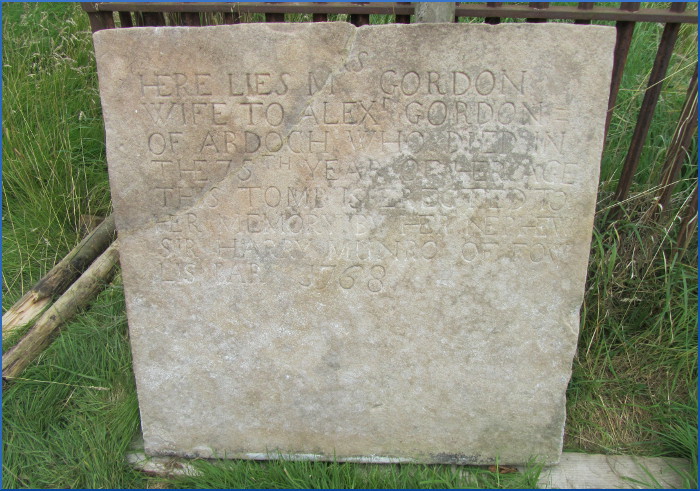 Despite what Sage and Miller said, the structure – a mausoleum? a tomb? a memorial? – is actually rectangular rather than square: two sides are 3.99 metres long, whilst the opposing short sides, one of which bears the memorial, are 3.11 metres long. The projection of the roof is matched by the projection of the footing. The memorial was inserted on the south side of the tomb, the closest side to the Kirk of Kirkmichael.

The tomb was built in 1768 at the very time that the new Kirk of Resolis was being built and the Kirk at Kirkmichael became redundant – the Presbytery on 10 February 1767 had agreed the finalised design of the new Kirk with George Munro of Poyntzfield, who was the “Undertaker” on behalf of all the heritors of the building of the new Kirk. On 14 November 1769, at Resolis, the Presbytery records show:

In regard that most of the Heritors are now present, Mr Munro of Pointsfield produced his accompts & Vouchers for all the money disbursed on building and furnishing the new church & craved to be exonered from his undertaking thereof. The Presbytery & Heritors consented to said Request & having caused summoned David Henderson & John Graham Masons in Cromerty & William Matheson & John McKay Wrights in Culbokie these Workmen were solemnly sworn and desired to inspect all the several Parts of the church materials & Workmanship & report to the Presbytery. After some Time these Workmen returned & judicially declared that they inspected all the materials & Workmanship of the church and find the same unexceptionally sufficient and properly executed, and Therefor Pointsfield is Hereby exonered from his Undertaking for said church. Thereafter He gave in to the Presbytery an accompt of Thirty three pounds seventeen shilling & ten pence sterling which he disbursed for making the Pulpit, Latron, Ministers Seat, buying a Bell and other articles, which being examined was approven by Presbytery & Heritors, and the several Heritors present engaged for themselves & the absents to pay the same according to their respective Valuations.

George Munro was to go on to convert the nave of the old kirk into a family mausoleum. We do not know exactly when he did this, but clearly it was between 1769, when the old Kirk at Kirkmichael was superseded, and 1806, when the first person to be commemorated in the mausoleum – himself – died!

While the Kirkmichael project was gaining momentum, the condition of the tomb was the cause of increasing concern; the memorial had cracked across at some time before the 1990s, and in 2015 had fallen out altogether. The top of the tomb was sinking in while the walls were bulging out. Protective fencing was erected around the structure to keep the public safe (always something to resist, as it is an admission that a building has passed the point of no return, and buildings behind such protection inevitably continue to deteriorate until they collapse). 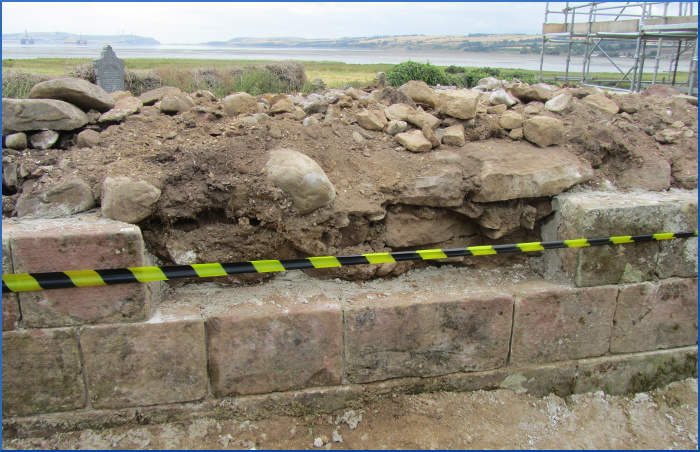 When the mausoleum was partially dismantled in 2016 to carry out repairs on the walls, roof and memorial, the upper sections were revealed to have been previously repaired. Much of the sandstone slabbing of the top surface had at some time been removed and replaced with unsympathetically-applied mortar. Below this were simply rocks, although a mixture of soil and rocks was visible below this. Lime was not seen close to the surface.

The tomb is currently (August 2016) being rebuilt and will be soft- capped with a layer of clay to keep water out, and deliberately turfed, as it would otherwise inevitably become covered with opportunistic weeds.

Hugh Miller recorded (not entirely accurately) the inscription, and I discuss in the complementary Story Behind the Stone on the Life of Lady Ardoch and her husband Alexander Gordon the possible reasons why it was left to Sir Harry Munro to erect a monument to his aunt rather than her own family. 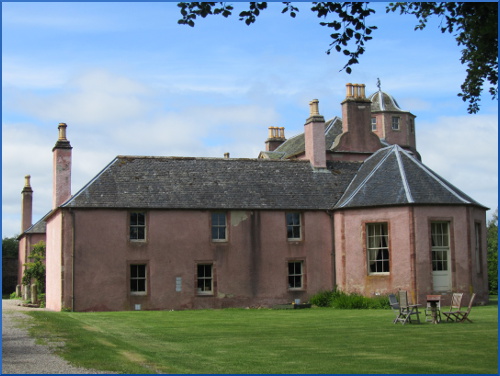 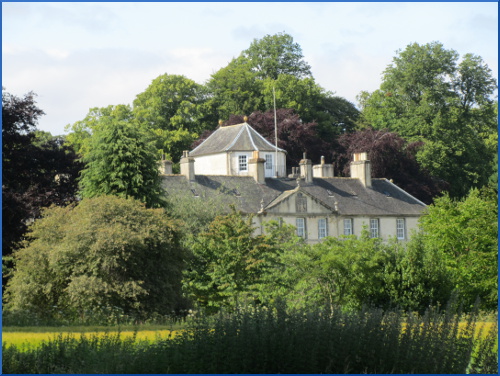 Of course, Sir Harry had form in erecting tombs. His father, an experienced military campaigner who had fought at the Battle of Fontenoy, had been killed by Jacobite rebels in the Battle of Falkirk in 1746. Sir Harry wrote to Lord President Forbes a few days after the battle: “My father's corpse was honourably interred in the Church-yard of Falkirk by direction of the Earl of Cromarty and the Macdonalds, and all the Chiefs attended his funeral.”

He was later to pay for a tomb for his father. The great Munro researcher, R.W. Munro, reported that:

It was some years before a monument was erected, as an entry in the Falkirk Parish Church accounts for October 1750 shows: “Present for the poor from Sir Harry Munro, five guineas, for the privilege of a Tomb upon Sir Robert, my Father, in the Church-yard”. With elaborate decoration, and inscriptions in Latin and English, which were renewed in 1848 and again in 1901, the monument was left in position when neighbouring stones were cleared away a few in years ago. Now, by its latest restoration, it is once more a fitting reminder of the man it commemorates: “Sincere and active in the service of his friends, humane and forgiving to his enemies, generous and benevolent to all, his death was universally regretted even by those who slew him.”

Sir Harry, who obviously believed in commemorating his family, thus must have despaired of his Gordon in-laws ever erecting a decent memorial to his highly-respected aunt, and six years after her death had the unusual structure erected in Kirkmichael. 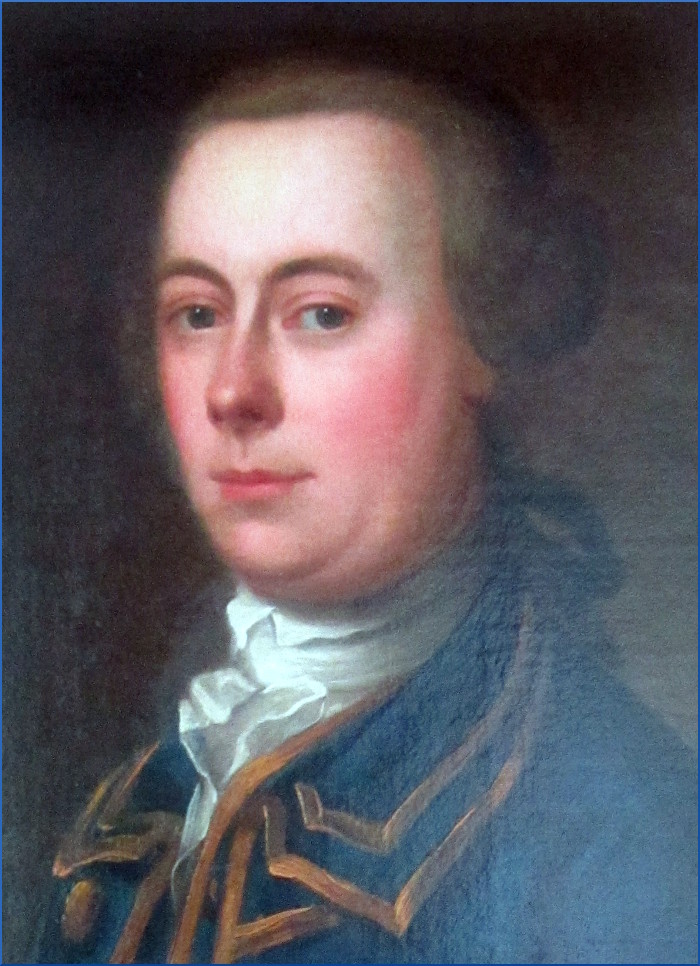 The memorial stone built into the southern face of her tomb was broken many years ago, but has now been repaired as part of the Kirkmichael Project. It reads:

Here lies Mrs Gordon, wife to Alexander Gordon of Ardoch, who died in the 75th year of her age. This tomb is erected to her memory by her nephew Sir Harry Munro of Fowlis, Bart., 1768.

The lettering contains some mild examples of ligatures (letters sharing uprights) as in “Her Nephew” seen below.

The memorial was erected six years after her death. Many gravestone readers (including myself for a long time) mistakenly assumed from this inscription that she had died in 1768. Indeed, her portrait in Foulis Castle bears this date of death and estimated birthdate. However, several magazines including the Scots Magazine and the Caledonian Mercury recorded her death at the time as on 27 February 1762. The whole stone structure was erected over the existing grave of Lady Ardoch several years after her burial.

It is very likely that this close to the kirk there would have been several old burials and gravestones within the footprint of her mausoleum. The implication therefore is that existing stones in her proximity would have been either cleared or buried. If the latter, then there may be further genealogical information buried under her large and unusual memorial.