text: Dr Jim Mackay    photos as given below each image

This is the story of Jane Urquhart, daughter of William Urquhart, coachman at Raddery, and Catherine Matheson. She died, still a young woman, a year after being married. Her father and her husband did not get on. The tablestone commemorating her short life stands beside the steep bank in Kirkmichael that marks the western boundary of the ancient graveyard. A dyke once ran along here and the gateway to the graveyard was only a few paces away, so her gravestone would have been the first tablestone you met as you entered the graveyard. It was in a strategically important position. 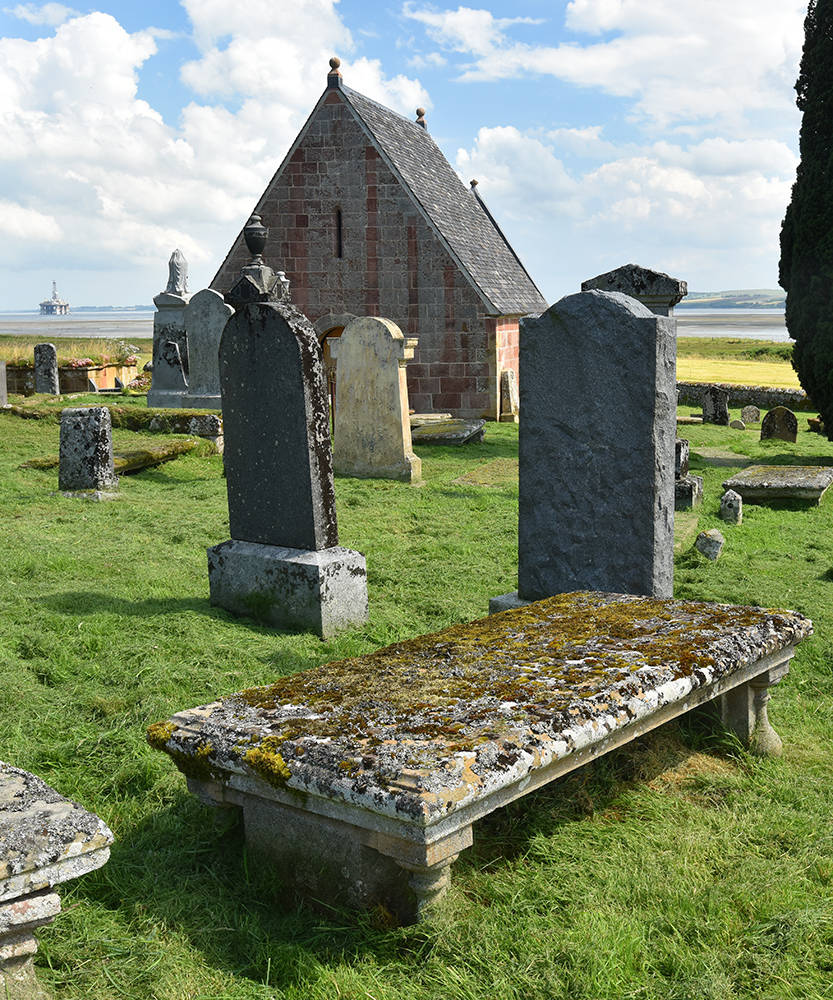 This was clearly in the mind of her father when he gifted, on the very day that she died, the lair to her husband, Donald Munro. He was a cartwright in Jemimaville and was shortly to move to Chalkhill in the parish of Cromarty.

Jane’s memorial bears one of the few poems on Kirkmichael gravestones. Black Isle folk were not effusive in their grief, but there are a few poems scattered about, usually on the gravestones of daughters who died young.

William Urquhart bought four lairs in Kirkmichael at the same time. There is only one stone with the family name in this part of the kirkyard, his daughter’s, but we know that in time he, his wife and his son Neil were also buried in Kirkmichael. The rather confusing record of the purchase, one of several bound within the Resolis marriage register, states:

Despite gifting the lair to Donald Munro, William Urquhart made sure the husband did not get a mention on the inscription, so clearly there was a deep antipathy there. It reads:

Erected by WILLIAM URQUHART in memory of his loving and affectionate daughter JANE who departed this life the 19 April 1831 aged 27 years. Her death is lamented by her parents and regretted by her friends and acquaintances
Oh see how soon the flower of life decays
How soon terrestrial pleasures fade away
Oh pause reflect repent amen
Life has no length eternity no end

You will note that parents, friends and acquaintances are all mentioned, but not her husband. Extraordinary. The poem itself reflects William Urquhart’s pride in his daughter and attempt to salve his pain by thoughts of everlasting life.

I see variants of the second part of the poem “Oh pause reflect repent amen / Life has no length eternity no end” at several different locations. For instance, a variation found at Ashbourne Churchyard is given in “Mottoes for Monuments” published in 1872. However, the first three lines must be much rarer as I have not found any other occurrences of them. “Oh see how soon the flower of life decays / How soon terrestrial pleasures fade away”. The sandstone is eroded and smothered in lichen and moss, and it took some time to decipher that unusual phrase “terrestrial pleasures”! 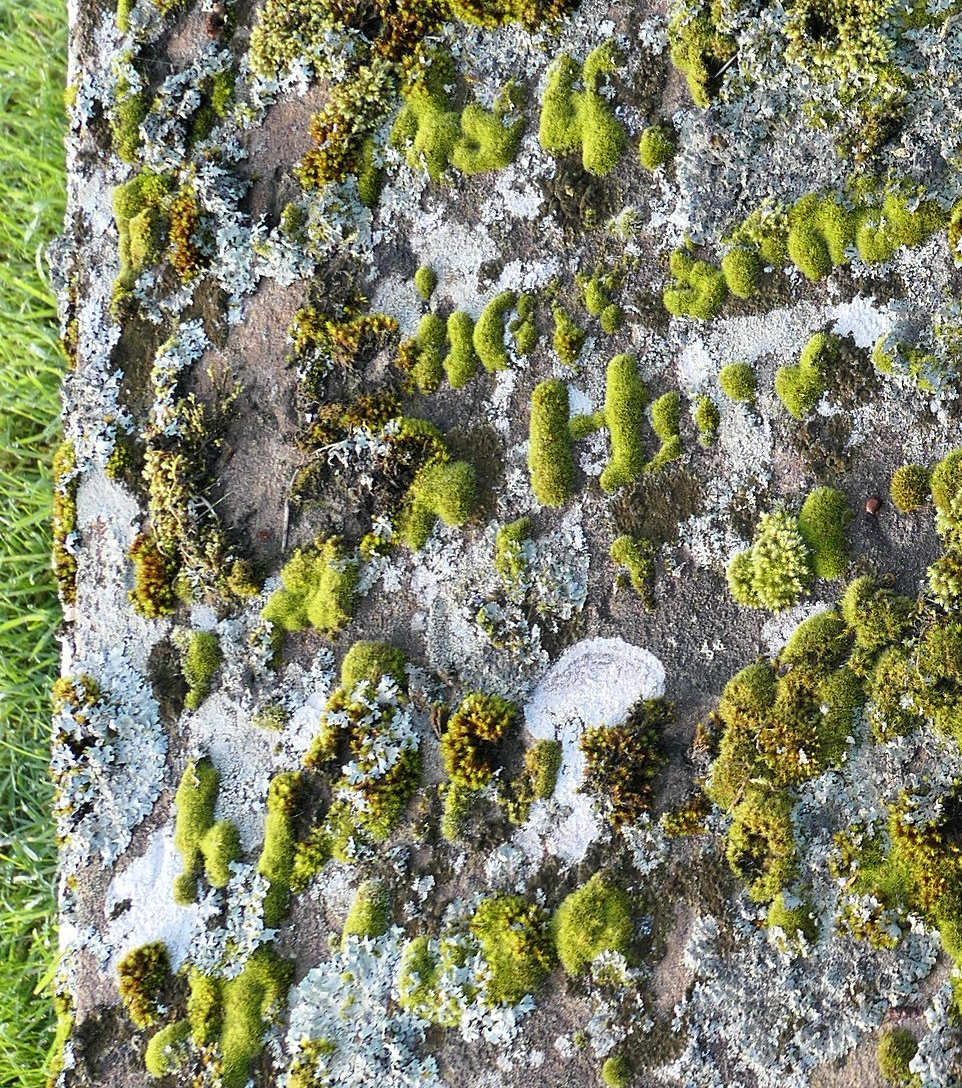 The letters of the poem are outlined by green moss

Twelve years after the death of Jane, her father was pursuing his son-in-law Donald Munro for the value of furniture given to his daughter on her marriage. Perhaps a lawyer can explain why he could claim the value of gifts made to his daughter, when you would have thought everything owned by the wife would have come to the husband on the wife’s death. Be that as it may, the case can be found in the Cromarty Sheriff Court Records (SC24/10/229)

Summons or Complaint in a Civil Cause. / … whereas it is complained to me by William Urquhart Coachman Raddery That Donald Munro Cartwright Chalkhill near Cromarty is owing the Complainer Five pounds ten shillings Sterling as per account herewith produced…

Another document in the case states:

Execution of Arrestment on the Dependence of an Action / Upon [20 May 1843] … by virtue of the foregoing Warrant of Arrestment, I lawfully fenced and arrested in the hands of Murdo MacKenzie Blacksmith Chalkhill parish of Cromarty all sums of money owing by him to the foresaid Donald Munro Defender, or to any other person… This I did by delivering a just Copy of Arrestment, subscribed by me to the said Arrestee Murdo MacKenzie personally apprehended before Robert Urquhart labourer residing at Chalkhill witness at the premises and David Ross miller residing at Davidstown witness, both hereto with me subscribing Adam MacRae Sherriff Officer 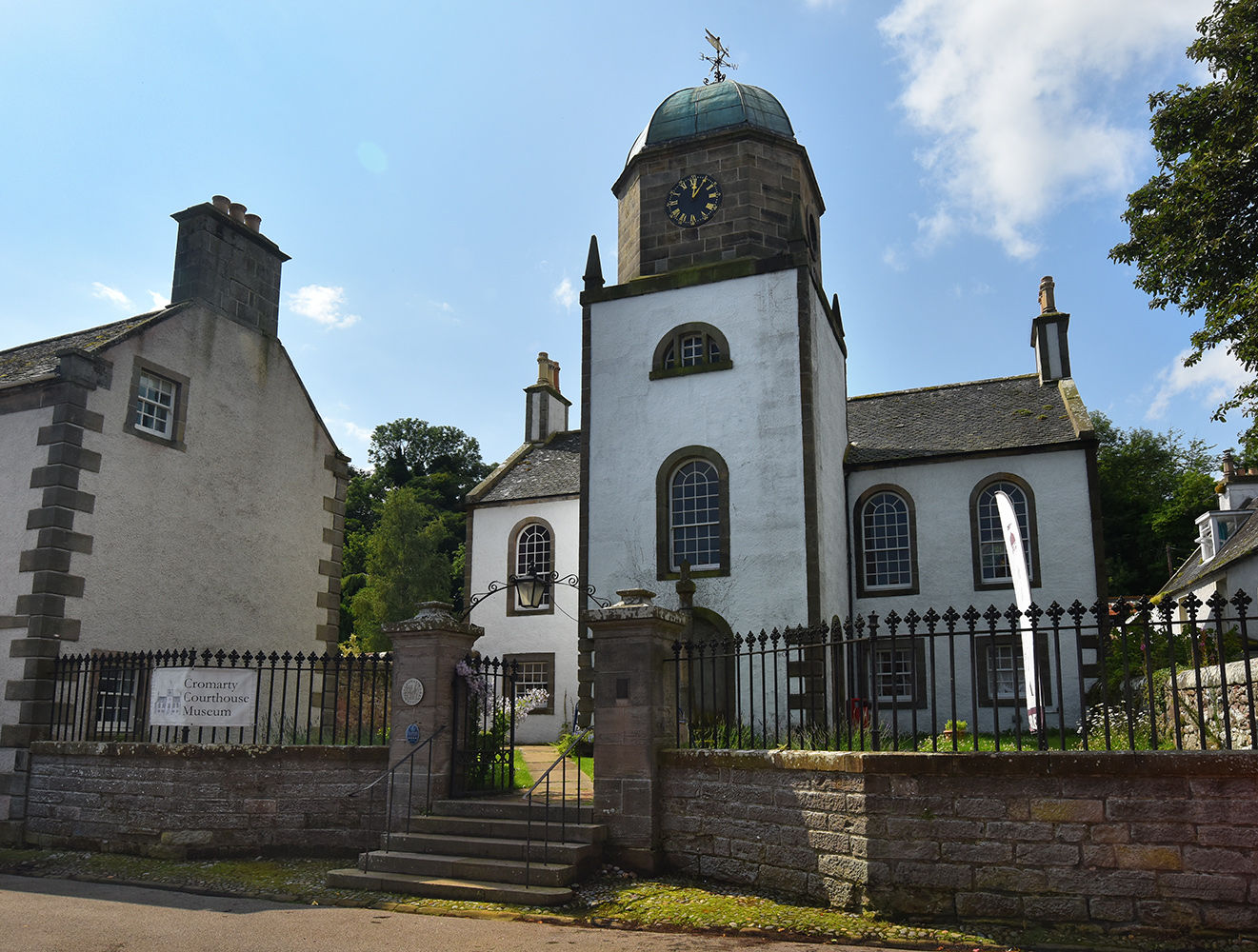 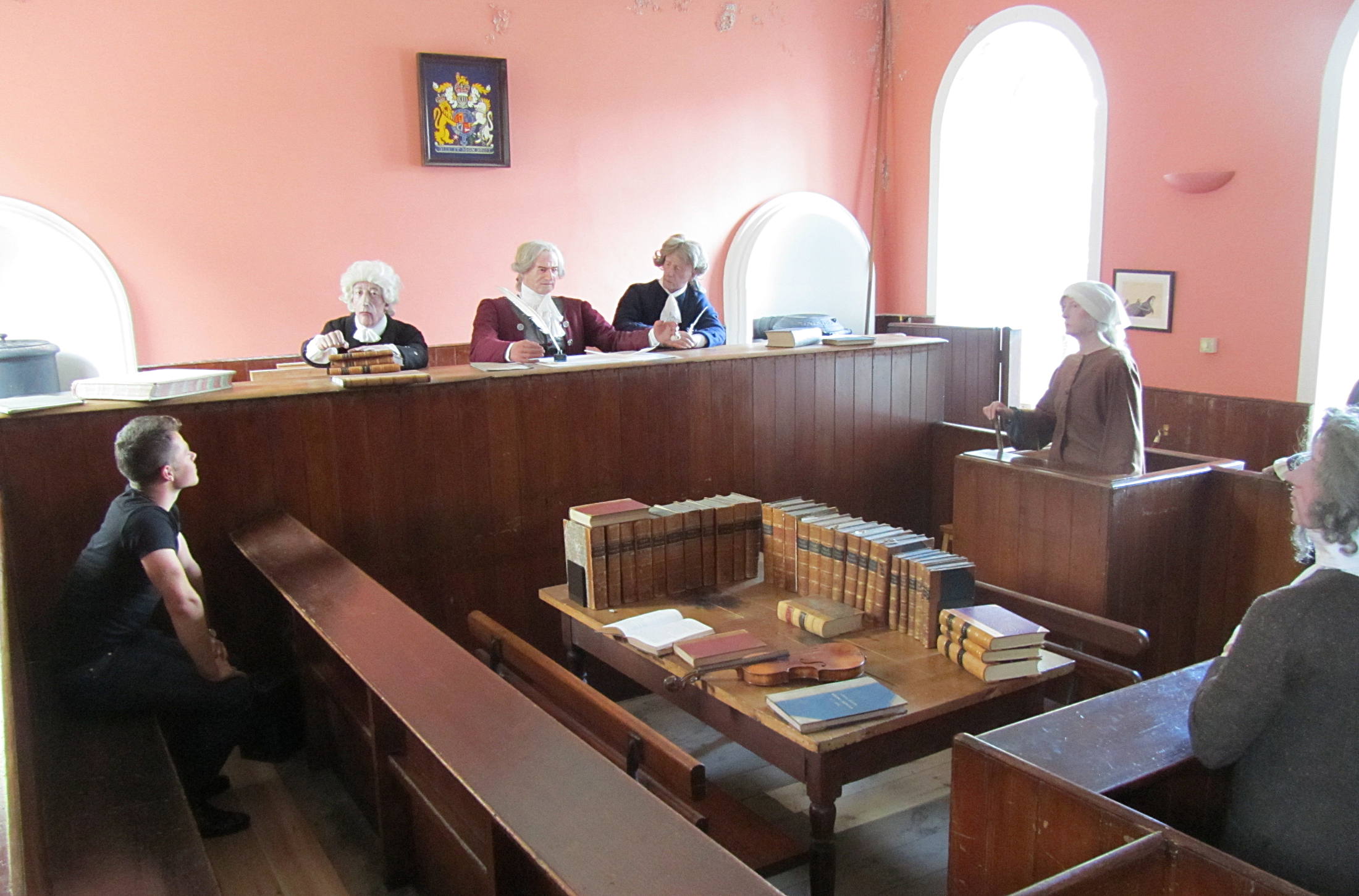 The court room in the Cromarty Courthouse; photo by Jim Mackay

I think what was happening was that since Murdo MacKenzie owed money to Donald Munro, and as Donald Munro owed money to William Urquhart, then Urquhart was short-circuiting the process and going after son-in-law Murdo MacKenzie for his money. The following document suggests that William sought the value of these gifts the month after his daughter’s death, and the legal process commenced three years later in 1834:

[cover] State of Debt Mr Dond. Munro Cartwright Chalkhill To William Urquhart Coachman Raddery 1834 £5-10/- Stg [contents] Account
Mr. Donald Munro Cartwright Chalkhill
To
1831 May
William Urquhart Coachman Raddery
To a Chest of Drawers given by me to my Daughter at her marriage with you and now in your possession £4.-.-
To a Clothes Chest given by me to my Daughter on the same occasion and also now in your possession £1.10.-
£5.10/-

I don’t know what the outcome of the dispute was, although in this type of case nobody is a winner.

What do we know about poor Jane Urquhart herself? She was born about 1804, but her baptism is not recorded in the parish register. This may be because the register was very badly kept during the incumbency of the Reverend Robert Arthur, and the baptism was not recorded. However, it may be that the entry was not made accurately. Her parents were William Urquhart and Catherine Matheson, and a couple of similar name (who never appear in the register again) had an entry retrospectively entered in the register:

It is not a perfect fit for age or mother’s name, but it may well be the correct entry. Jane married Donald Munro the year before her death, so she was older than the usual bride of the time:

The marriage was recorded in both the Resolis and the Rosemarkie marriage registers. I presume banns were read in both because, whilst Jane was residing in Jemimaville at the time, Jane’s parents were lived in the parish of Rosemarkie. Jane and Donald’s daughter Jane was born on 19th April the following year and baptised the day after:

You will note from these dates that Jane had died on the same day as her daughter Jane was born, so it is likely her death was due to complications with the birth.

Young Jane was brought up in family with her grandparents William and Catherine Urquhart in Raddery. I see her there in 1841 as a 10 year old, but not in 1851 by which time I presume she was out to service.

Donald Munro was a cartwright, a tradesperson specialising in making and repairing carts and wagons. William Urquhart was a coachman, and I shouldn’t be surprised to find that Donald repaired coaches for the area as well.

In addition to being a cartwright, Donald Munro was a Constable, and hence in several of the militia lists of the period (1825, 1826, 1828, 1831) he is excused from being balloted. I have no idea as to why he and William Urquhart fell out. The unpopular Donald re-married, a few years after the death of Jane:

Donald Munro was still there in Chalkhill in 1841, with his young wife and a new young family:

I don’t know when William married Catherine Matheson, but it must have been about 1800. She was from Sutherland. The Resolis registers were very poorly maintained in this period, with few baptisms recorded, but there are I think three children there:

Sometime between 1808 and 1831 William became the Coachman at Raddery. 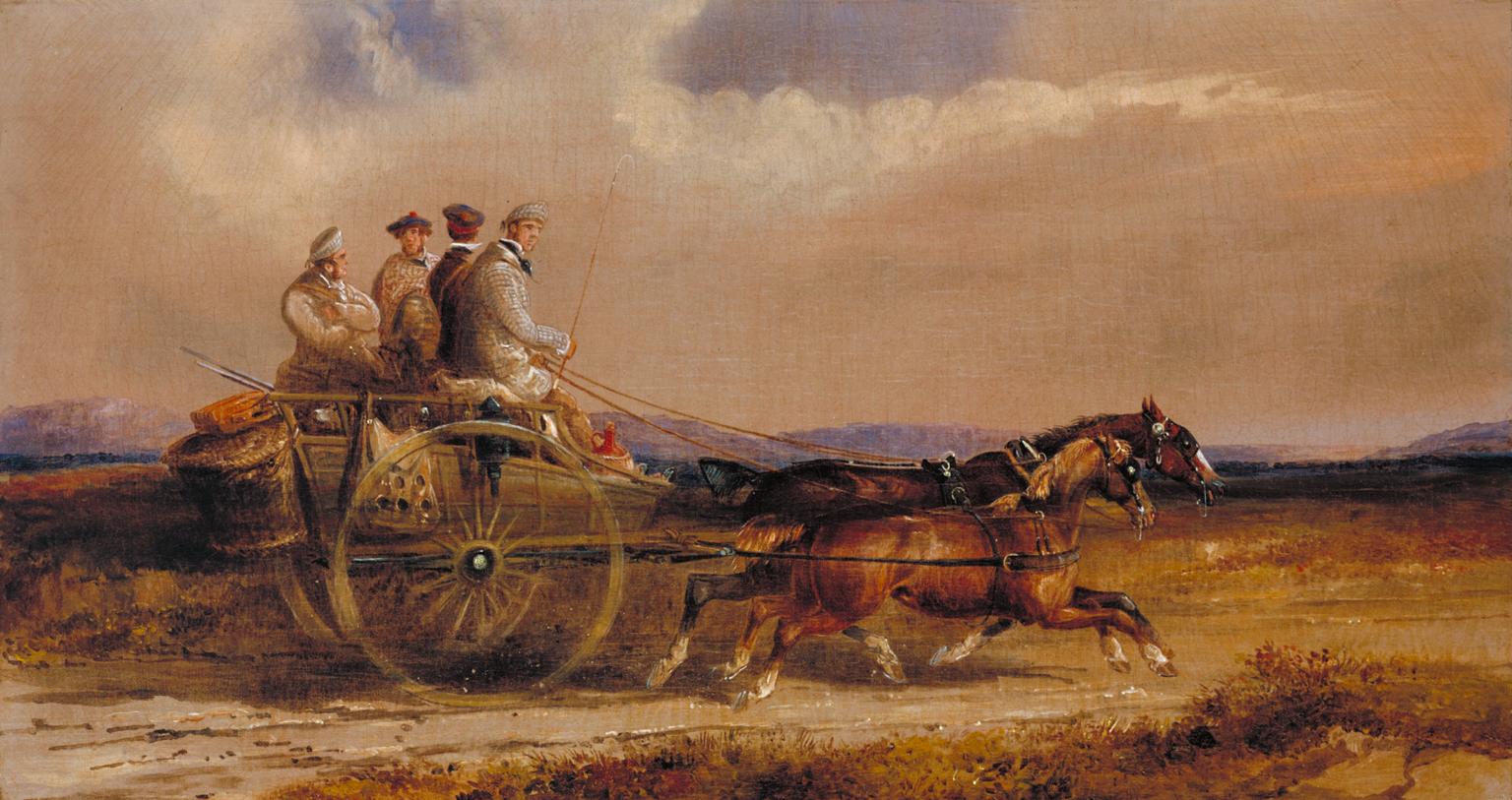 By the mid 1830s Neil was no longer the teacher in Jemimaville and I don’t know if he had moved on elsewhere or if he had given up due to ill-health. Certainly he died still a young man in 1838 and is buried in Kirkmichael. From the Rosemarkie “Register of Deaths”: 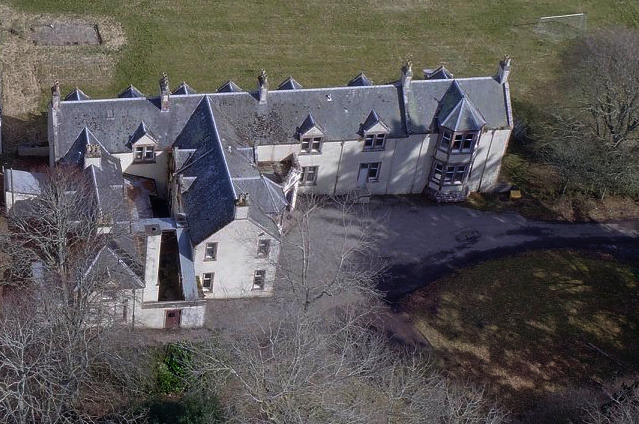 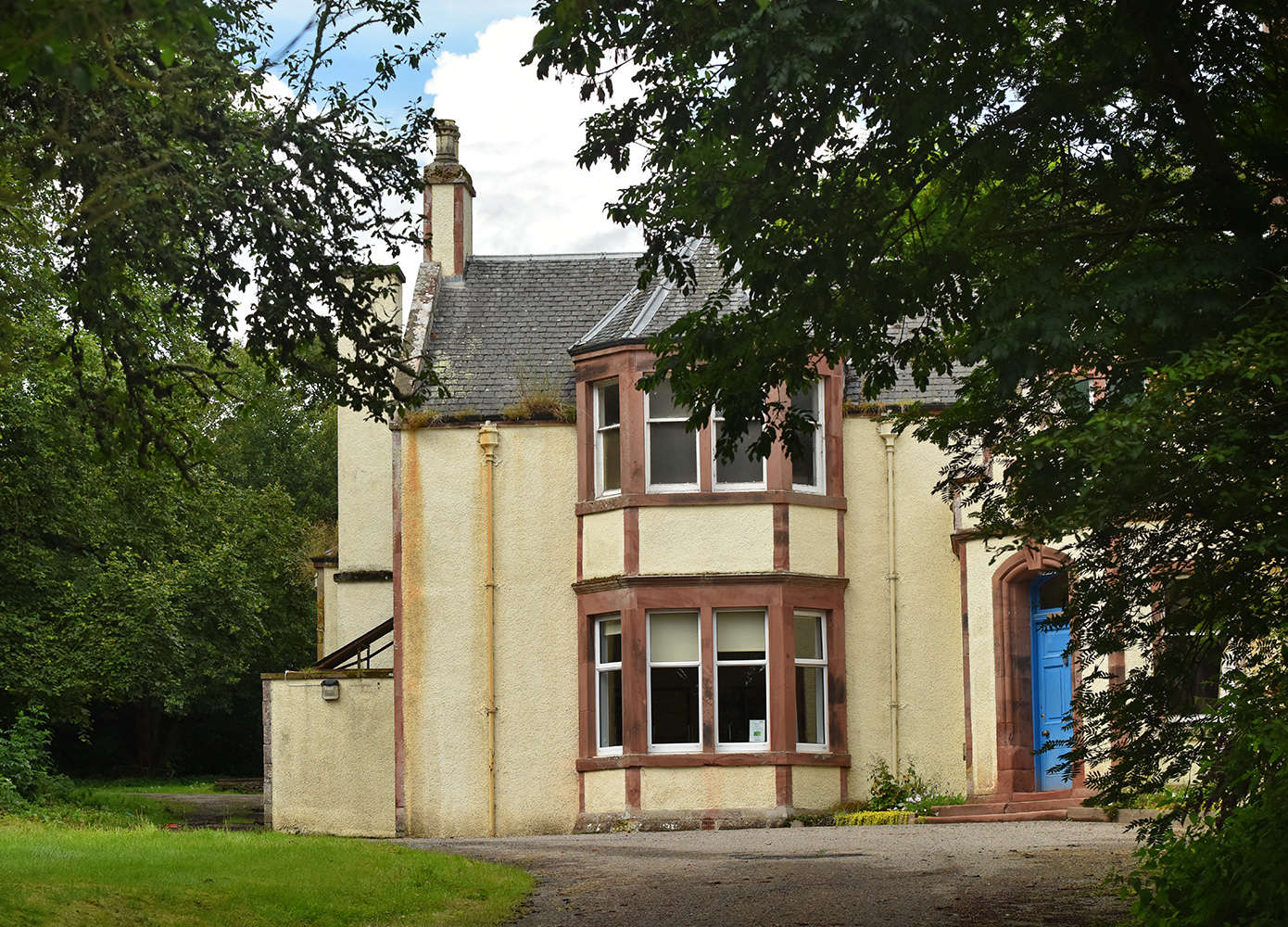 In 1841, William Urquhart is listed in the census return immediately adjacent to the proprietor in Raddery House. He is given as a man servant, with his wife Catherine Matheson and grand-daughter Jane Munro residing with him. The proprietor of the Raddery Estate, James Fowler, by now a very elderly man, is present in Raddery House with his family and retinue of servants. The age of William at this time is given as 60, and of Catherine as 66, and the pattern is continued in the 1851 census return. By this time William had retired and was living in nearby Muir Den (nowadays Muiryden) of Raddery:

Another Urquhart family resident in Muiryden in 1851 (and for much longer) were the blacksmiths of Raddery, who are also buried in Kirkmichael (see their Story behind the Stone) I have not yet made a connection between the two families, but I do wonder…

Catherine died the year after the census and was buried in Kirkmichael, according to the Rosemarkie Death Register:

William continued at Muiryden until he too died, in 1860, and was also buried in Kirkmichael:

There is no stone to commemorate William, Catherine or Neil in Kirkmichael despite their burial there.

William’s brother Alexander was also a coachman, but in his case at Poyntzfield. More details of his life are provided in the complementary Story behind the Stone on the Children of Alexander Urquhart and Henny Stuart previously linked.

I see from the baptism records of his children that he moved from Dalmore to Poyntzfield somewhere between 1821 and 1823. He appears on several militia lists, the first being in 1825, which states: “Poyntzfield … Alexander Urquhart coachman >30 4 ch E” which translates as Alexander Urquhart, coachman at Poyntzfield, over 30 years of age, was excused from being balloted as he had four children under the age of 10. Four children are again mentioned in the list dated August 1828. However, the list dated January 1831 refers to three children under the age of 10, when the baptism records make it clear there should have been four. This suggests one child had died, and I wonder if it was that which triggered his purchase of some burial plots in Kirkmichael.

Poyntzfield– 1834 / Alexander Urquhart, Coachman at Poyntzfield bought from John Hossack at Davidston in the parish of Cromarty, three burying places situated on the South of the Old church – there being only one grave between them and the old church – This he has done in the presence of these Witnesses – Signed, Niel Urquhart, Witness / Hugh McDonald Witness

The three burying places Alexander bought had previously been bought by the family, and indeed bear the initials of Alexander Urquhart and Henny Stuart and date 1805. However, we are now straying into that complementary Story behind the Stone. Alexander died in 1870:

By the time of his death, Alexander had risen from coachman to ground officer, a more responsible post. 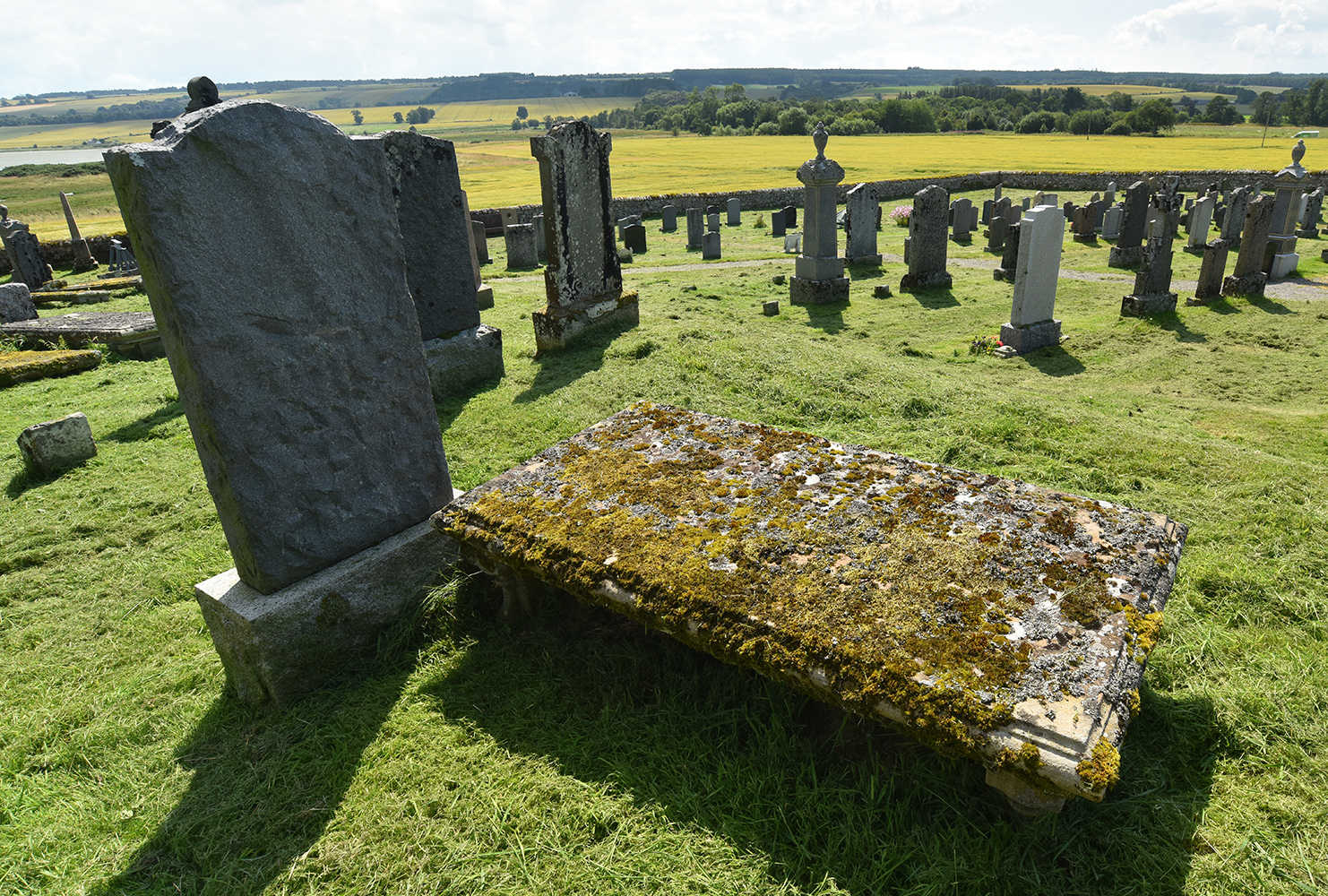 The tablestone erected by William Urquhart in memory of his daughter Jane; photo by Andrew Dowsett