The Historical Significance of Graffiti

When does graffiti on a heritage object become old enough to become of historic interest in itself? This was the serious query that lay behind a light-hearted posting on Kirkmichael’s Facebook page by my daughter, Kirsty, when she ran it for a period. The small story was re-posted a surprising number of times, as it must have hit a nerve.

When the smiddy lads during their lunch-hour used their trade instruments to pick out their initials on the stone verges of the Newhall Bridge (“the Bodach’s bridge”), it has a certain amount of charm. But when a bunch of drunken yobs smash a child’s memorial and deface it with crude drawings and other graffiti, you would think there would be little lasting interest in it. And yet… 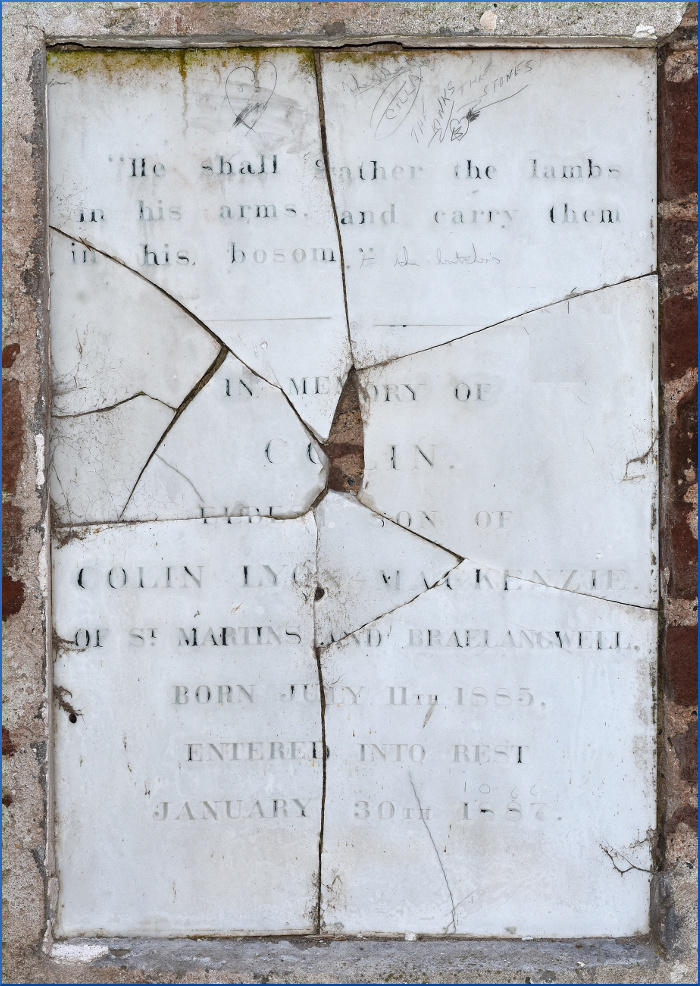 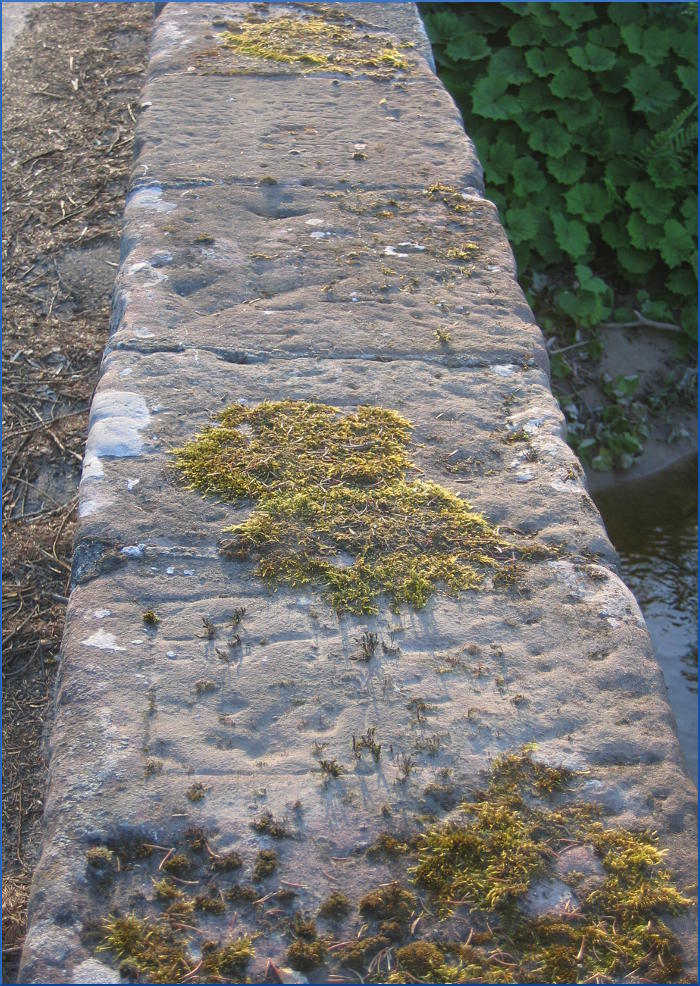 The story is a simple one. Back when the Invergordon to Balblair ferry used to run, a drunken group of (allegedly) Invergordon youths came over the ferry one day and wandered around the neighbourhood causing mayhem. It has to be said that they would have found little else to do in this quiet country area. They entered the Gun Munro mausoleum at Kirkmichael, smashed the marble memorial to young Colin Lyon-Mackenzie and defaced it. Some of it was anatomical, but poorly drawn. Some of it was the usual heart and initials. Some of it was comical in the juxtaposition of Victorian sentiment and Invergordon pragmatism: to the quotation from Isaiah “He shall gather the lambs / in his arms, and carry them / in his bosom.” the youths had added some words, so that the eventual destination of the gathered lambs was “to the butcher’s”.

The deplorable work of the vandals

The good news is that the smashed memorial has been removed and will be repaired so skilfully, that the finished memorial will be back in one piece, as strong and as clean as it was to start with.

It has to be said that there always has been a question mark over why young Colin Lyon-Mackenzie’s memorial was in the Gun Munro mausoleum to start with. Major Colin Lyon-Mackenzie (–1881) owned St Martins and Braelangwell in the late 1800s, and as interests of the Lyon-Mackenzies were mostly in Inverness, their memorials are to be found there. Thus the grandfather of young Colin, the Major, though dying in Braelangwell House in 1881, has memorials in both the Chapel Yard and in the Old High Church in Inverness. Many of the young Lyon-Mackenzies were born in Braelangwell House, but the registration of young Colin’s death was in Kensington, Longon – the family were living there whe he died. However, why the memorial in the mausoleum of another estate? The answer lies in the name of the Major’s wife: Frances Emily Munro. She was the daughter of Captain Innes Colin Munro, VI of Poyntzfield, so clearly the Gun Munro Mausoleum was absolutely the right place for a memorial to their poor child. The inscription reads: “He shall gather the lambs / in his arms, and carry them / in his bo-som.” / In memory of / COLIN, / eldest son of / COLIN LYON-MACKENZIE, / of St. Martins and Braelangwell, / born July 11th 1885, / entered into rest / January 30th 1887.”

Anyway, I'm quite sure that this is not what was passing through the minds of the yobs from Invergordon when they smashed the marble memorial. But what did they write at the top of the marble memorial, such a suitable surface for their rough pencils?

The answer certainly dates the graffiti: The Beatles CILLA The KINKS The STONES

Kirsty posed another question: nowadays who would be scrawled up there? We had only two suggestions, one for The Kinks, clearly still popular after all those years, and one modern one, for wildly popular singer and songwriter Adele. But the post got richeted around many other sites asking the question, giving, on the side, welcome publicity to the Kirkmichael project which is doing so much to restore the derelict and dangerous mausolea at Kirkmichael, repairing stones and setting up our display of ornate medieval and later gravestones. 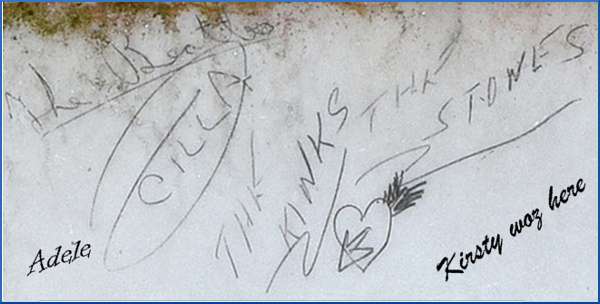 For the full story of the Lyon-Mackenzie family of Braelangwell and St Martins, see our Story Behind the Stone devoted solely to them. The marble memorial to Colin Lyon-Mackenzie is now cleaned of all its graffiti and is being carefully repaired so that the record of the unwelcome event back in the 60s is now expunged.