text: Dr Jim Mackay    photos as given below each image

Many thanks to Lisa Lamb, great-great-great-granddaughter of Isabella Ferguson, for photographs and information on later descendants 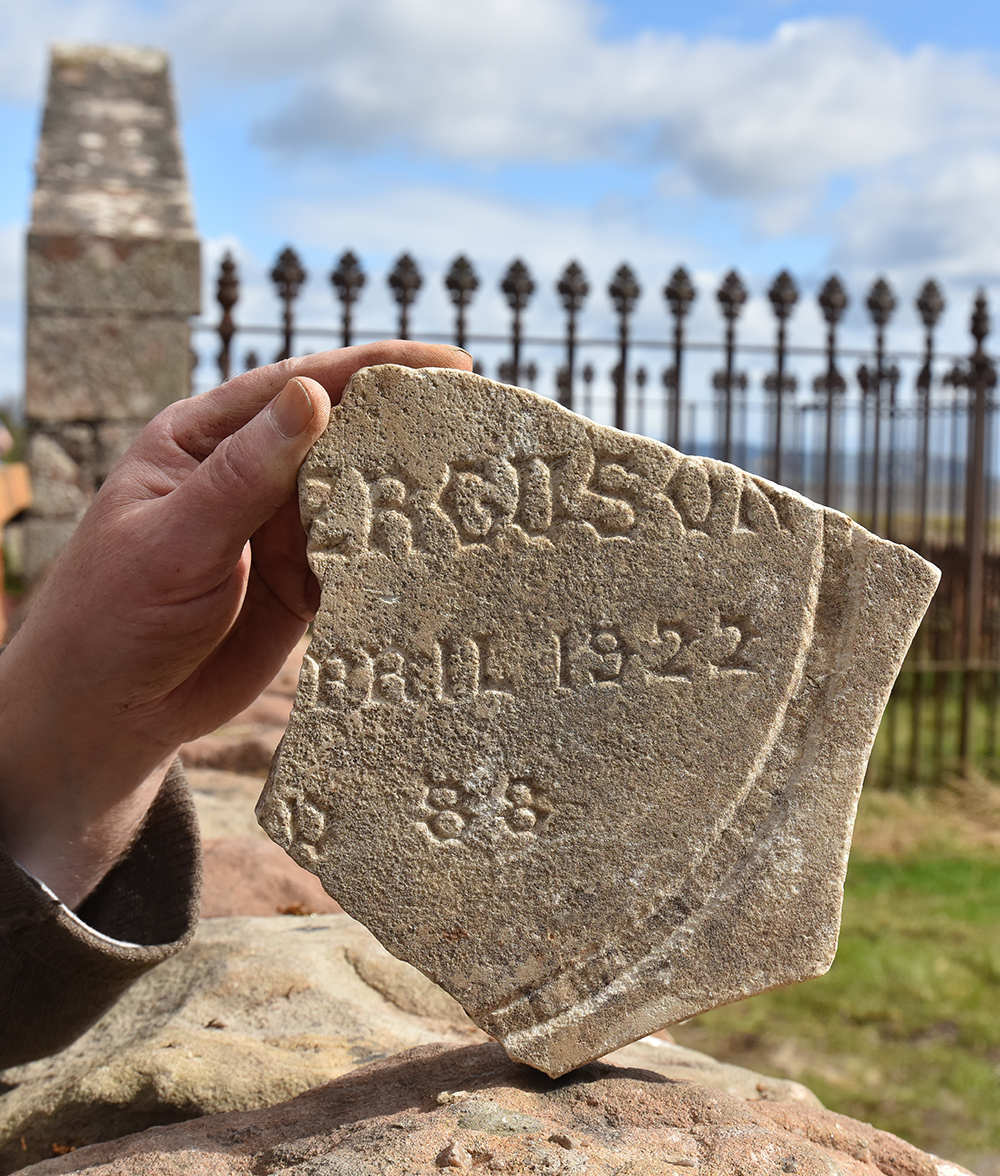 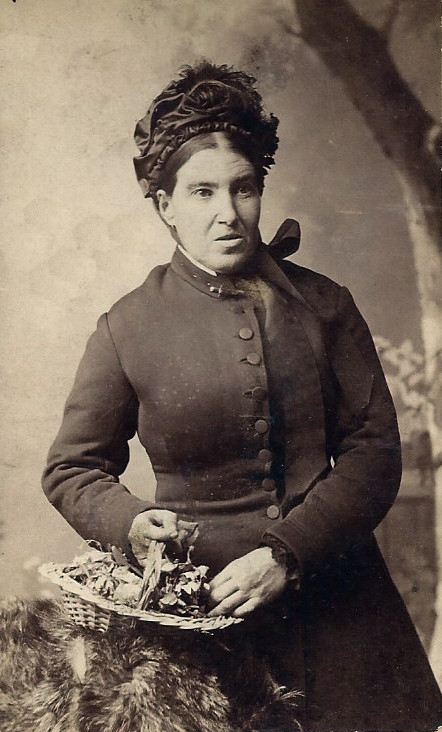 This is the story of the smallest memorial in Kirkmichael – a fragment of a shield revealed after restoration work in 2017. You wouldn’t think there was much to go on, but the broken words did give us a toehold:

Expanding the obvious, we had a Ferguson who died in April 1922 aged 88. The remnant was found lying outside the kirkyard dyke beside the main road. Just inside the dyke at that point was the substantial headstone of Hugh Ferguson and Janet McKenzie of Balblair which we had just had professionally re-erected. It had lain face down in the turf for at least 20 years. The assumption is that the workers had uncovered the fragment, placed it on top of the dyke and it had at some point slipped off and been forgotten about. And it was likely that the Ferguson on the plaque was a relative of the Hugh and Janet on the main headstone. We have a few of these odd plaques, which are always a bit challenging to treat as respectfully as we would wish. You can’t attach them to the main stone, and yet tucking them under or behind a tablestone or headstone risks losing them altogether. One has in fact disappeared since being recorded in the 1990s.

We placed the image of the broken plaque on our Facebook page and I was delighted when Mrs Lisa Lamb commented that the plaque was that of her ancestor, Isabella Ferguson. 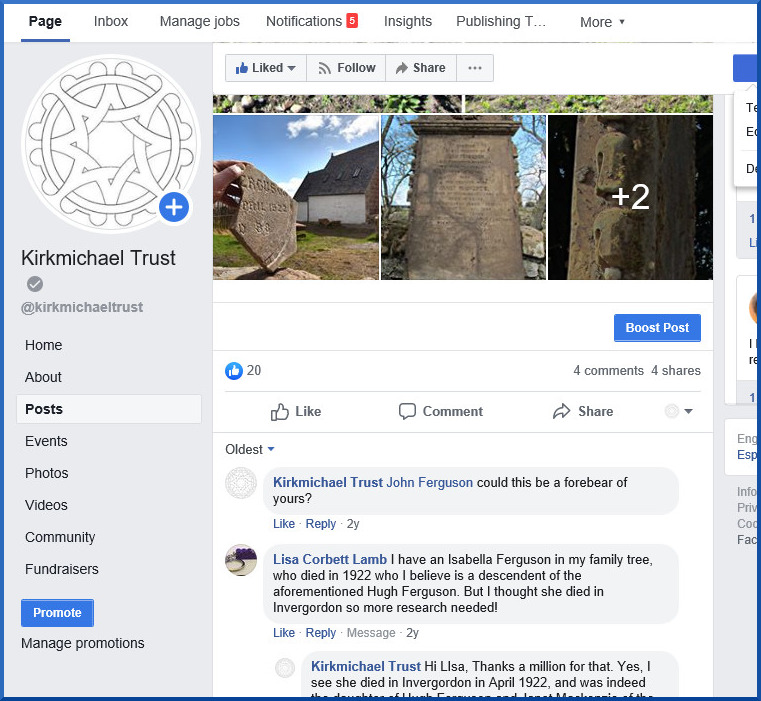 Isabella had died in 1922, in Rosskeen, just a short ferry crossing from Balblair. Her death certificate confirmed that her parents were indeed the couple commemorated on the headstone which we had just paid to have re-erected.

Her daughter had provided information correctly to the registrar, except for her mother’s age, which was wildly out. Inspection of the Resolis baptism record showed that she was in fact born on 25th August 1832 and baptised on 13th September, and her age is correctly given on subsequent census returns until her death. Her daughter perhaps was making herself out to be younger than she was and in turn had to make her mother appear younger; or perhaps the registrar simply made a mistake. The broken plaque, which gave an age of 88, was almost correct – her true age was 89.

Isabella’s parents lived at Balblair. The family was an important one at the time. Hugh had operated the Balblair to Invergordon Ferry, held the Balblair Ferry Inn and farmed land at Balblair. He was a tacksman. He was entitled to vote. There will be a Story behind the Stone devoted to Hugh and Janet at some point, as there are many colourful incidents in their lives, mostly associated with trying to keep a respectable Inn in a time of intemperance. They were ancestors of my own – their daughter Jane married a crofter in Cullicudden called James Maciver. There are lots of these Macivers out in Canada and still a few scattered about in the Black Isle. The Macivers married into the Fergusons of Auchmartin (who seem to have been a separate line of Fergusons from those at Balblair despite being the next farm along), and my mother was a Ferguson of Auchmartin. I thus had a keen interest in Isabella, sister of the Jane who was one of my own forebears!

Isabella Ferguson never married. What was the story then behind this daughter, Isabella Johnson? Let’s follow Isabella Ferguson’s life. Born in 1832, she appears in the 1841 and 1851 census returns for Hugh and Janet’s numerous family first as an eight year old and then as a 17 year-old housekeeper. She does not appear in the Ferguson household in the 1861 census at Balblair, presumably because she was away working. Both she and her daughter appear in the 1871 censs at Balblair, but in different houses! Isabella senior is looking after the house of her brother John, with her elderly mother Janet also present, while a few doors away eight year old Isabella junior is residing in the modest home of her aunt Alexanderina:

In 1881, mother and child were both present in the wee house at Balblair.

By 1891, though, Alexandrina was the sole occupant, as her sister Bella was now the housekeeper at the registrar’s, David Anderson, nearby at Chapelton. David Anderson had overcome the stigma of illegitimacy himself to succeed in life, and his substantial memorial became another repair job for the Kirkmichael Trust – see his Story behind the Stone.

In 1885, young Bella Ferguson married merchant seaman Robert Johnson. He had been born in Cromarty and at the time of marriage both he and Bella were living in the town, although they married in Inverness:

And so the name of the absent father is revealed as being master blacksmith John McDonald. I note that Bella’s mother was a witness at the wedding. By the 1891 census, Robert and Isabella had settled in Clyde Street, Invergordon. By the 1901 census, they had moved to their long term residence at 135 High Street, Invergordon. But by this time she was a widow.

These later census returns give more information about Isabella’s birth place. Many unmarried mothers in this era went away to have their babies. I have seen towns such as Montrose and Aberdeen used in this way. Whilst most census returns give Isabella’s place of birth as Resolis, the 1891 census gives it as Aberdeenshire, and the 1901 census as Fraserburgh, Aberdeenshire. But under what name Isabella’s birth was recorded I have been unable to find. No Isabella McDonald or Ferguson was born in Fraserburgh in the correct period. Given her age, she must have been born about 1863, and hence there was a legal requirement for her birth to be registered, but locating it has defied me. 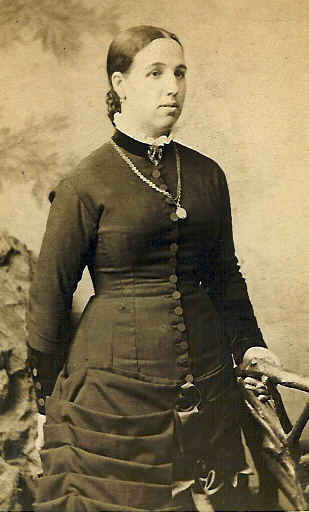 Lisa Lamb very kindly provided me with images of not only Isabella Ferguson but also Robert and Bella Johnson. We will not bring the story into the present day, as I do not like to intrude upon more recent generations. However, I note that they had three daughters, with Robert dying in 1896, a young man, before the third daughter was even born. Lisa tells me that there is a family story that he was murdered on board his ship but that she has never found anything to corroborate this. The Marine Return and the Aberdeen Press and Journal both record his having drowned accidentally.

Extract from the Marine Return

The family Johnson can be seen on the High Street in Invergordon in the 1891, 1901 and 1911 census returns, and they were still there in 1922 when Isabella Ferguson died.

Returning to Isabella Ferguson, she continued to live in Balblair until quite late in life, when she moved across to Invergordon. In 1911 she was residing with her sister in Balblair, and it is revealed that they both spoke Gaelic and English:

Across at Invergordon were her widowed daughter and family, and I imagine Isabella would have joined them after the death of her sister at Balblair in 1915.

Lisa tells me that her grandmother lived in Invergordon for a time in the house where Isabella Johnson lived and where in 1922 Isabella died (135 High Street). Her grandmother remembered pleading with Hugh the Ferryman to take her out on the ferry in a storm – and him saying that her mother wouldn’t be very pleased if he did! At that time she did not know that there was a family connection. Lisa tells me that she enjoyed telling her some of this information. 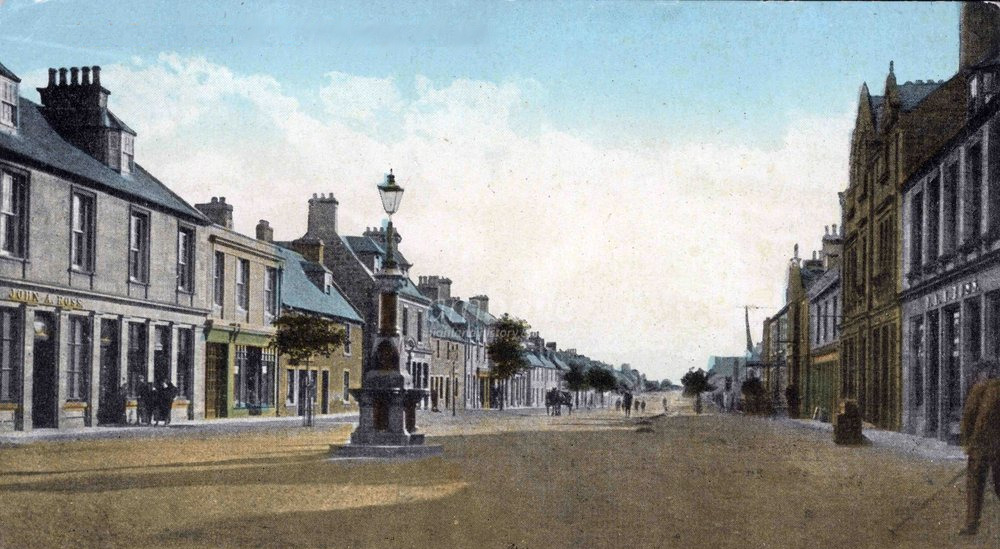 What to do with the fragment of Isabella Ferguson’s plaque? For now, we have slipped it down between the back of her parents’ headstone and the dyke, but it will inevitably get lost once again. All suggestions gratefully received! 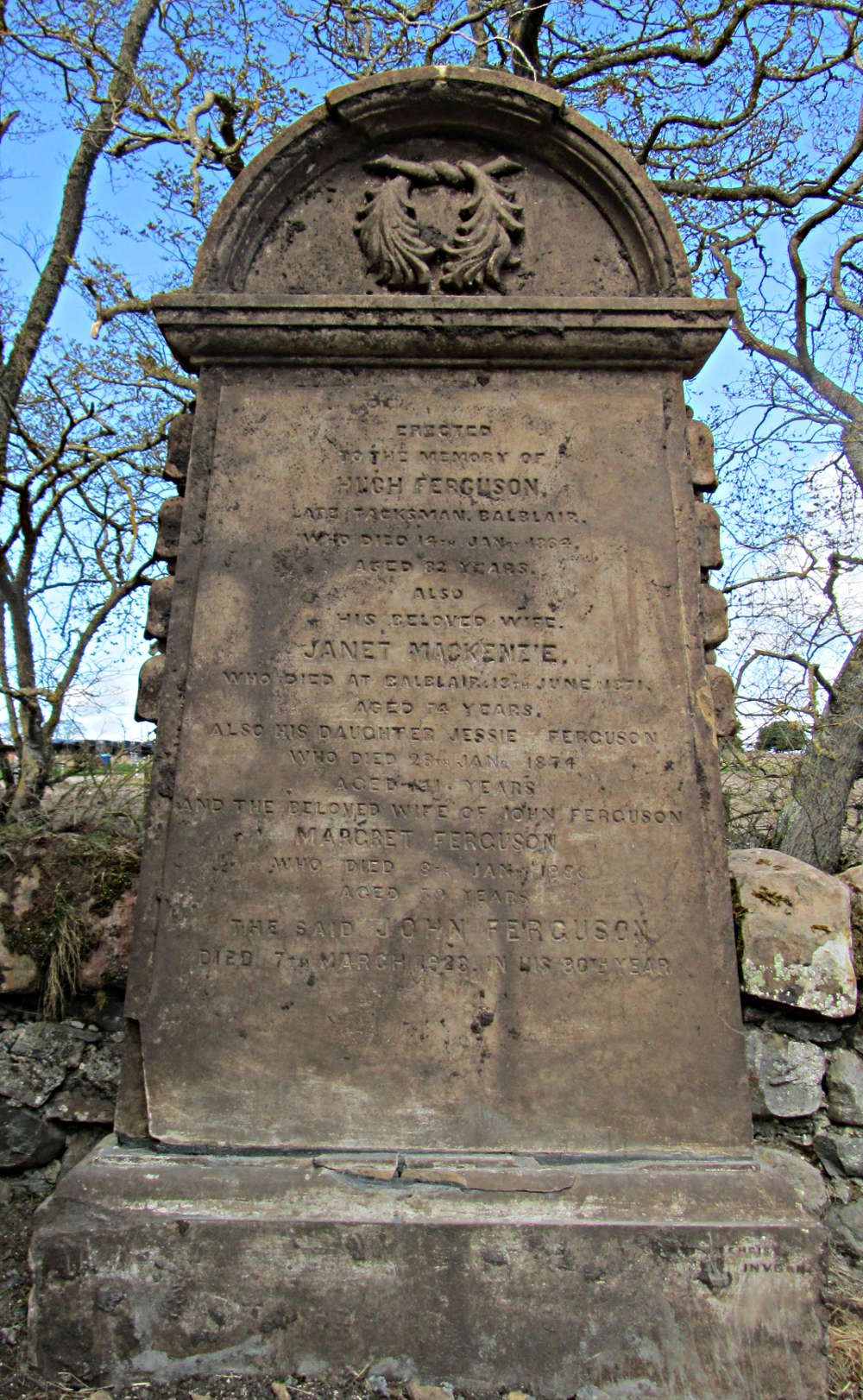 The recently re-erected headstone commemorating Isabella’s parents, Hugh Ferguson and Janet McKenzie, behind which the fragment of Isabella’s shield has been stored.