The Archaeological Dig of the Former Nave and Chancel Floors at Kirkmichael, October and November 2016 – and the experience of two volunteers, Steve and Madeleine Robinson

The Kirkmichael Trust thanks all the archaeology volunteers who worked so hard in October and November 2016, often in inhospitable weather, in the former nave and chancel at Kirkmichael! 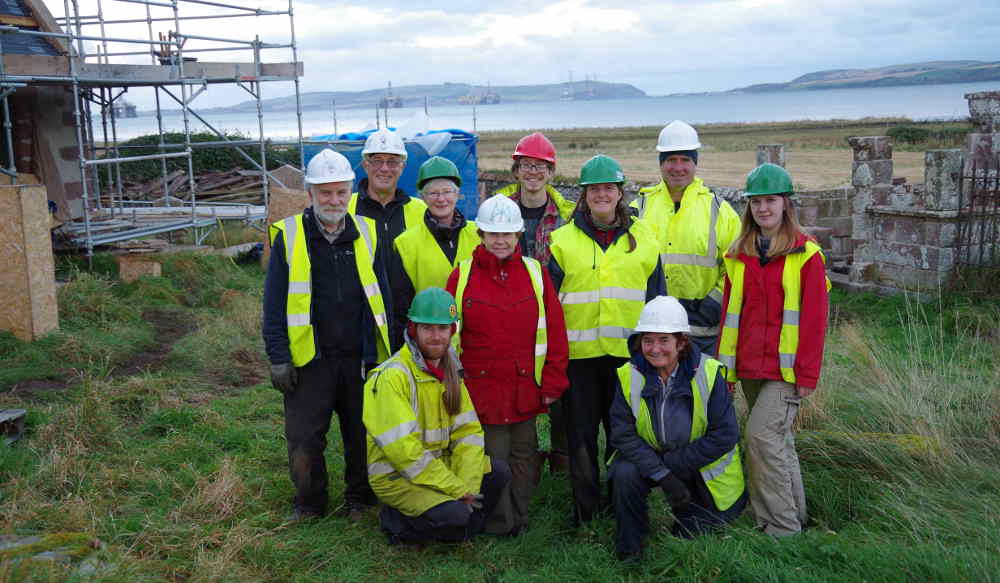 Some of our archaeological volunteers, and our Highland Archaeological Services supervisors, outside the door to the former chancel, with Udale Bay and the Sutors behind.

As the buildings at Kirkmichael comprise a Scheduled Ancient Monument, set within an old graveyard, many of the activities have been under archaeological supervision. But one major exercise was carried out as an archaeological event in its own right: lowering of the floor in the nave and the chancel of Kirkmichael.

The following are our initial observations, whilst we await the formal report on the dig. And following the observations below, we include the personal experience of two of our volunteers.

After the roof collapse in 2012 in the nave, truly the lowest point in Trust morale, the Trust removed timbers and slates to beside the dyke in the kirkyard to await re-use where possible in the repair works at Kirkmichael. But it was apparent that there was a tremendous amount of plaster, weeds, pigeon remains and guano, and fragments of slates and rotten roof timber, to be cleared. But that didn’t quite explain just why the level of the nave floor was so high in comparison with the chancel floor. Both needed to be lowered, the nave by a lot, the chancel by a little, to accommodate the new floor of Caithness slab, below which a sand layer and membrane would be placed.

But why was the nave floor so elevated?

In late October, the archaeological volunteers began their painstaking work under the supervision of Lynne and Lachlan Mckeggie of Highland Archaeology Services, scraping soil loose and placing in buckets. The buckets of soil were then sieved through a marvellous piece of bespoke kit, comprising a large plastic fish crate and perforated metal, to identify any items of interest. 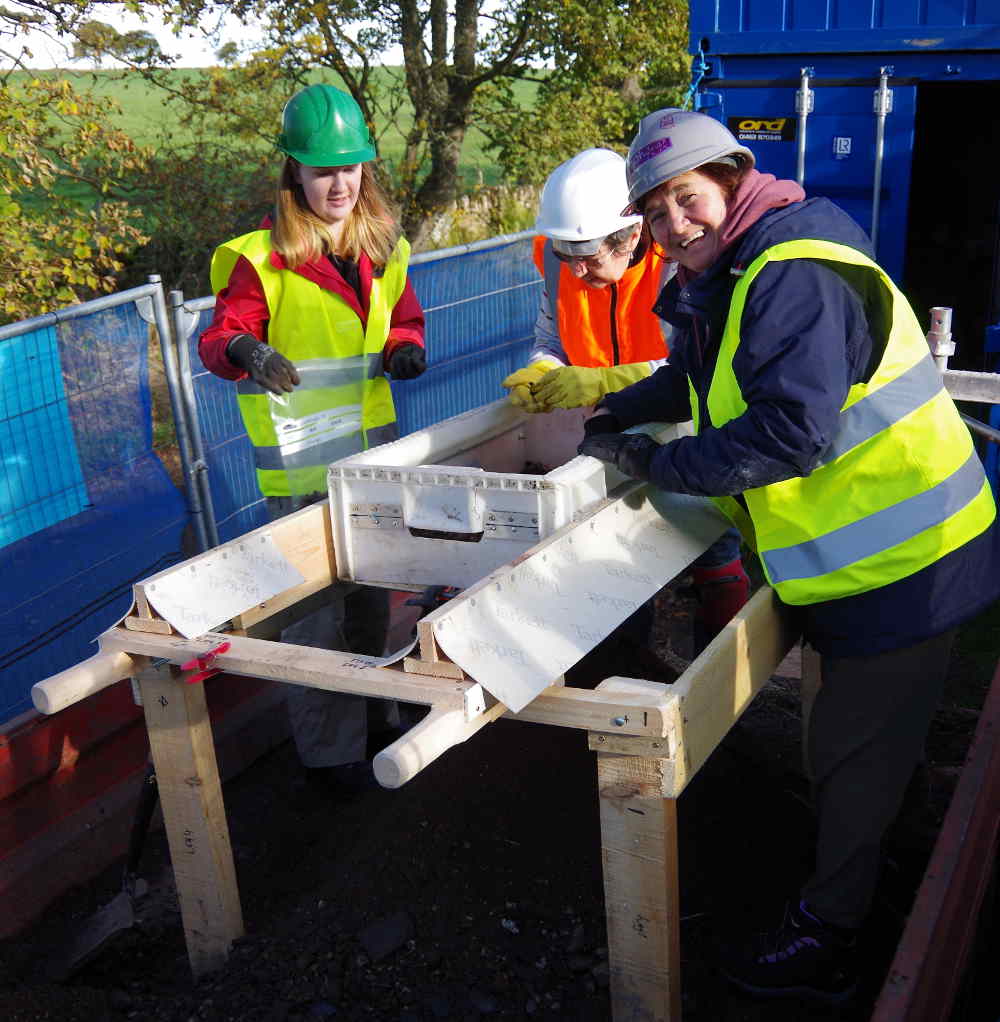 The first discovery was that the roof fall of April 2012 was not the only one to have been experienced. Slates and rotten timbers appeared, evidence of an earlier roof fall. 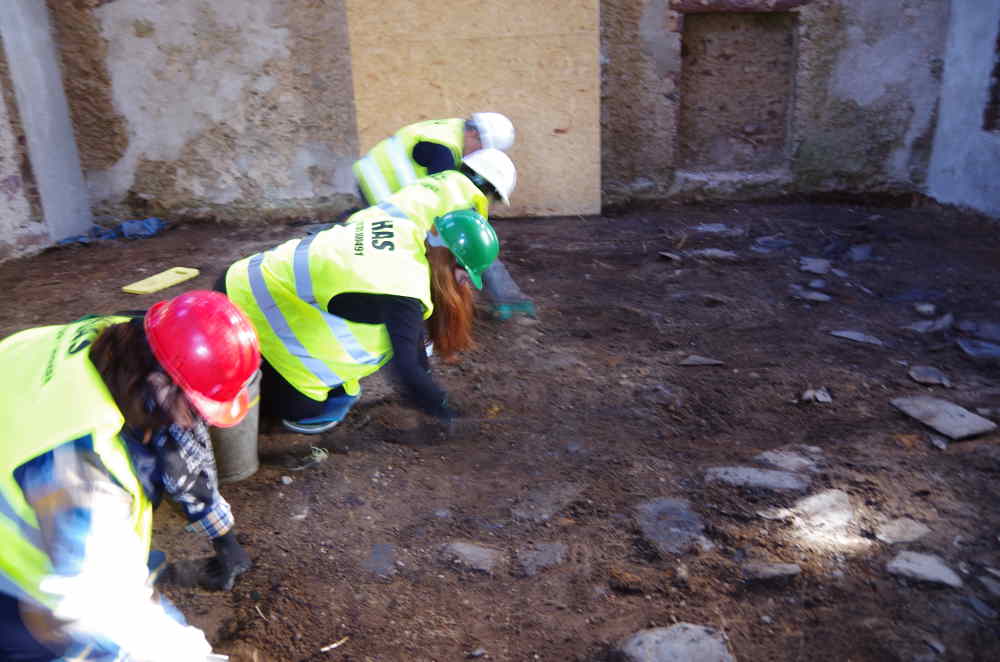 Slates and rotten roof timbers from an earlier roof fall – but why so little?
Photo: Lachlan Mckeggie

We are still trying to rationalise this as the 1906 postmarked postcard we refer to so often shows a perfectly sound roof on the nave, and we have assumed that that is the roof which survived in increasingly parlous condition until the collapse in 2012. From a picture from the 1970s, some newer looking slates can be seen on the left hand side, but in fact these can be seen on the 1906 picture as well. It seemed unlikely that rotten roof timbers and slates could have originated post 1906. 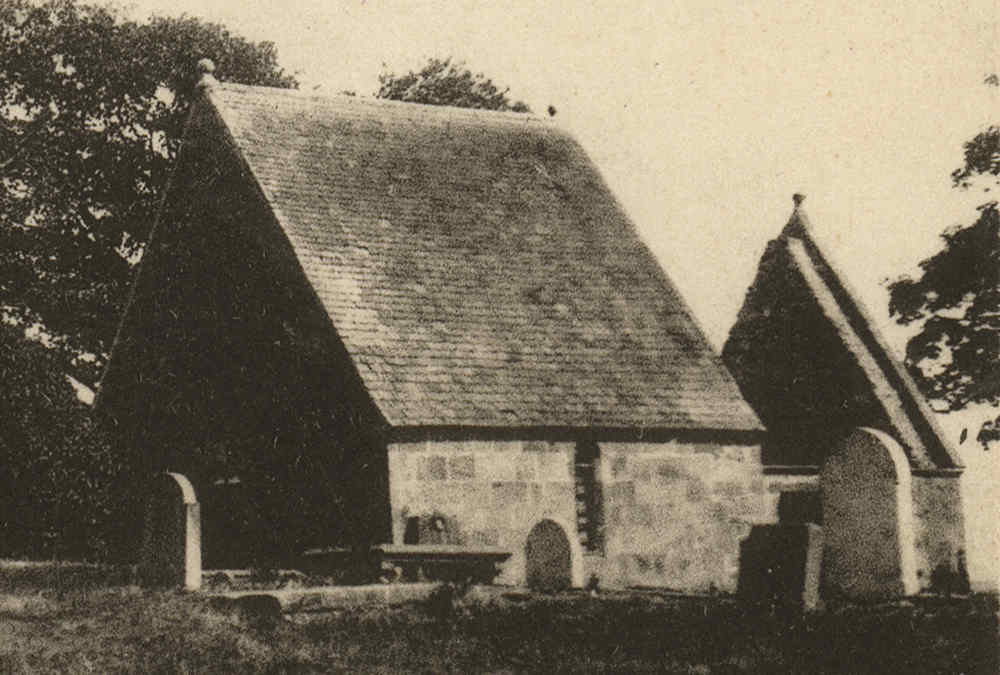 The buildings as on an extract of a 1906 postmarked postcard, courtesy of the late Mrs Essie Munro 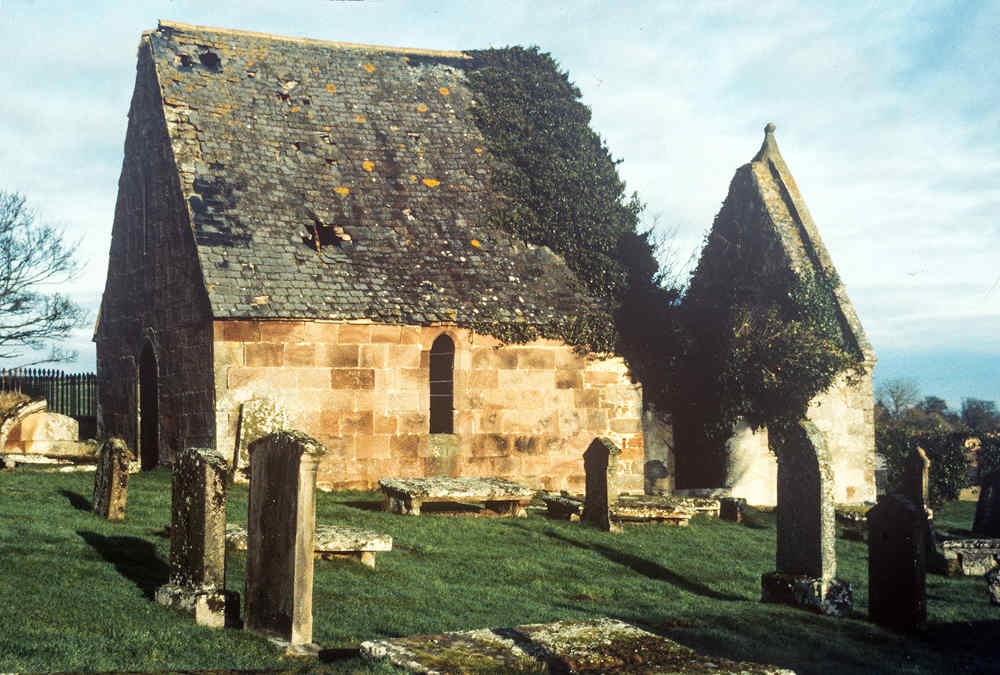 the buildings in the 1970s; photo: Andrew Dowsett

The thought did strike us, given the relative paucity of slates and rotten timbers (a tiny amount compared to the mountain of material from the 2012 collapse), that we might be seeing the remnants of a collapse of an earlier roof on the chancel side, from which most of the slates had been taken away for re-use elsewhere and the rotten timbers and damaged slates dumped through in the nave. Archaeology provides wonderful opportunities for conjecture!

The fact that the nave had been used as a dumping ground for the kirkyard was becoming abundantly clear. A long metal structure appearing through the soil revealed itself to be a railing for a graveyard enclosure, no doubt thrown into the nave by kirkyard maintenance workers in decades gone by. The railings within the kirkyard are all unique, some of them with extraordinary metalwork. This one was relatively simple, but a perfect match for one recovered from an odd corner of the kirkyard some months ago and awaiting the rest of it to emerge. 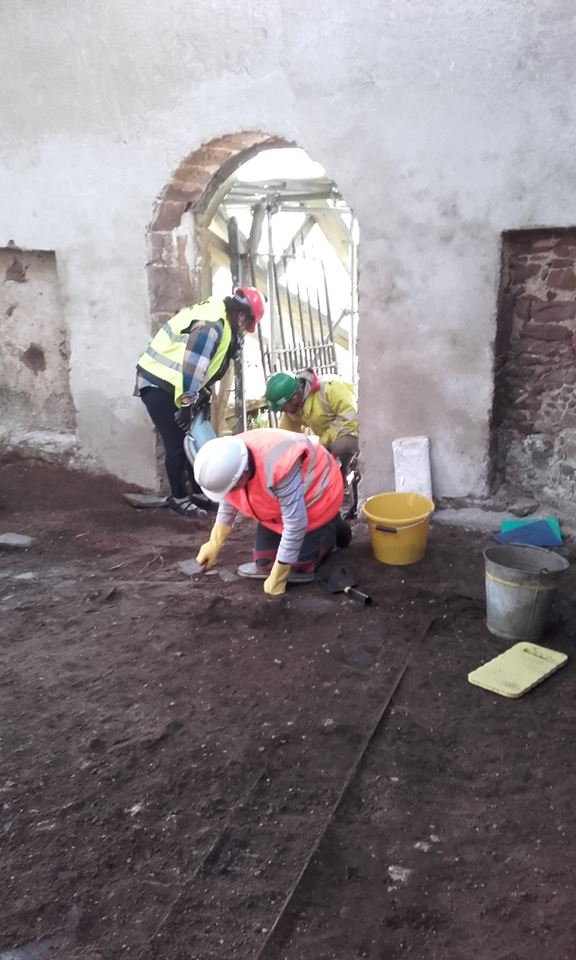 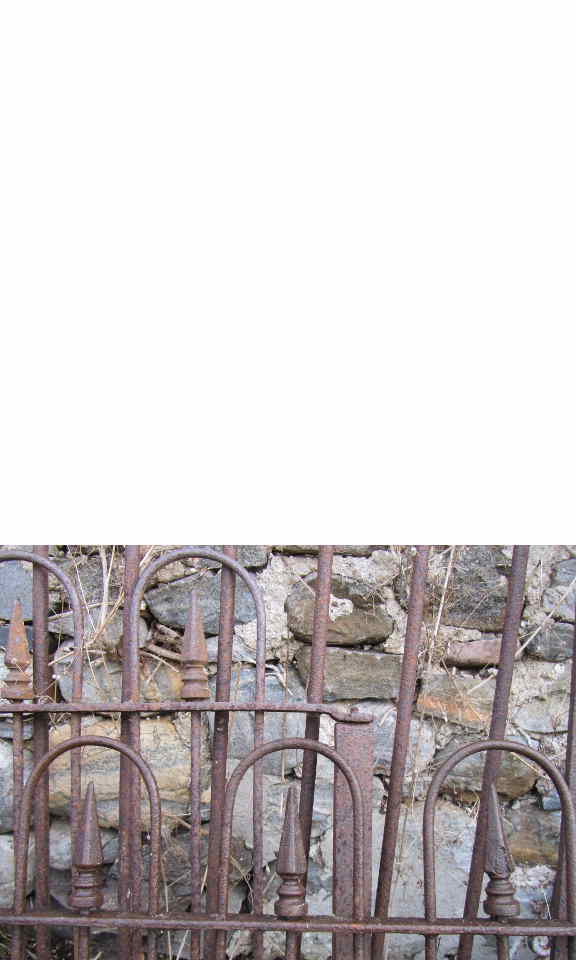 We had now realised that much of the soil in the nave had in fact been deposited by gravediggers over a long period of time. The nave, converted to a mausoleum by the Gun Munro family of Poyntzfield about 1800, has not been used as a burying place for more than a hundred years. Gravediggers always find a quiet corner in a kirkyard to place the inevitable excess soil when a grave is excavated. This must have continued until access to the nave was prevented about 20 years ago through initially a chestnut paling fence and then later security fencing and a plywood structure set in the doorframe.

Now, we know that as Kirkmichael is a very old kirkyard, most graves excavated in the original graveyard would have been into ground previously used for burials. An extract in the Kirk Session records confirms this, as an outraged parishioner was to find out:

The expectation then was that a grave dug in the old kirkyard into a new piece of ground was the exception, and thus the surplus soil usually disposed of by the Kirk Officer could contain material going back several centuries. This confirmed that such soil deposited in the nave had to be examined with care.

These are some of the unexpected finds.

A beautiful sixpence bearing the date of 1679, the head of King Charles II, and “Nemo me impune lacessit”. 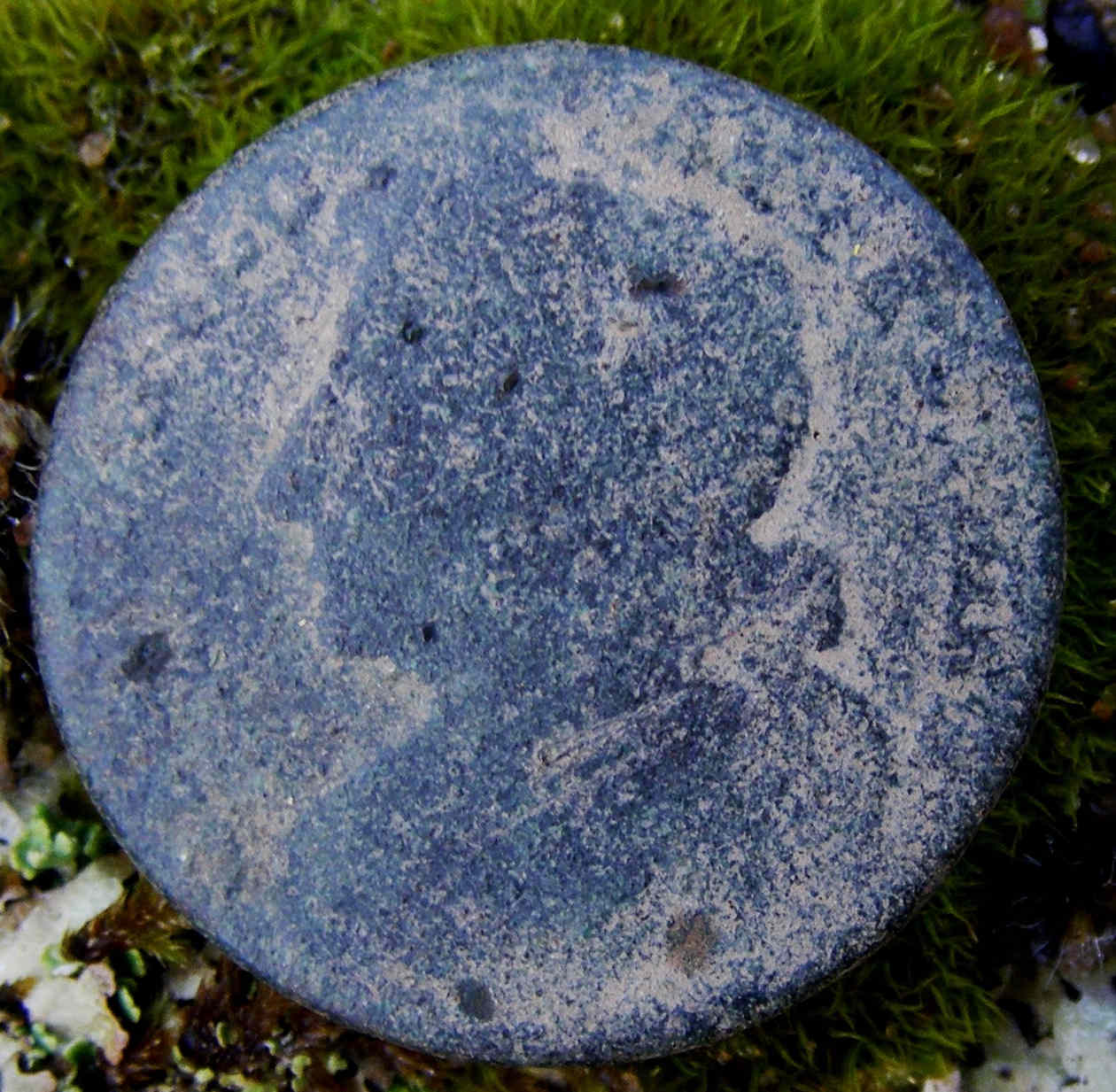 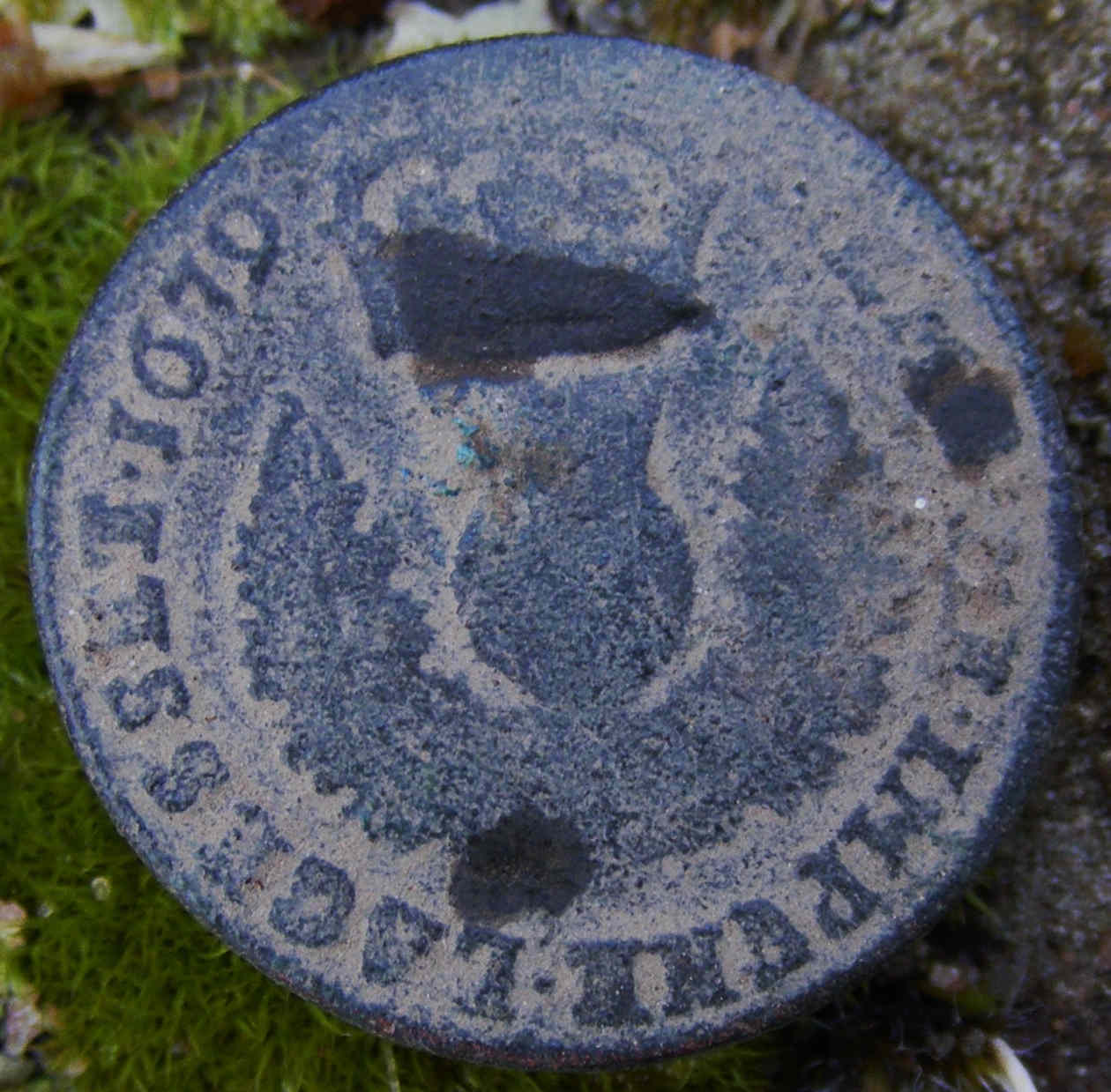 The most startling find was a prehistoric flint arrowhead. One suggestion as to why it has appeared in the nave is that it may have been a good luck charm. Was it once not uncommon for a “fairy arrow”, as flint arrowheads were once known, to accompany a burial? 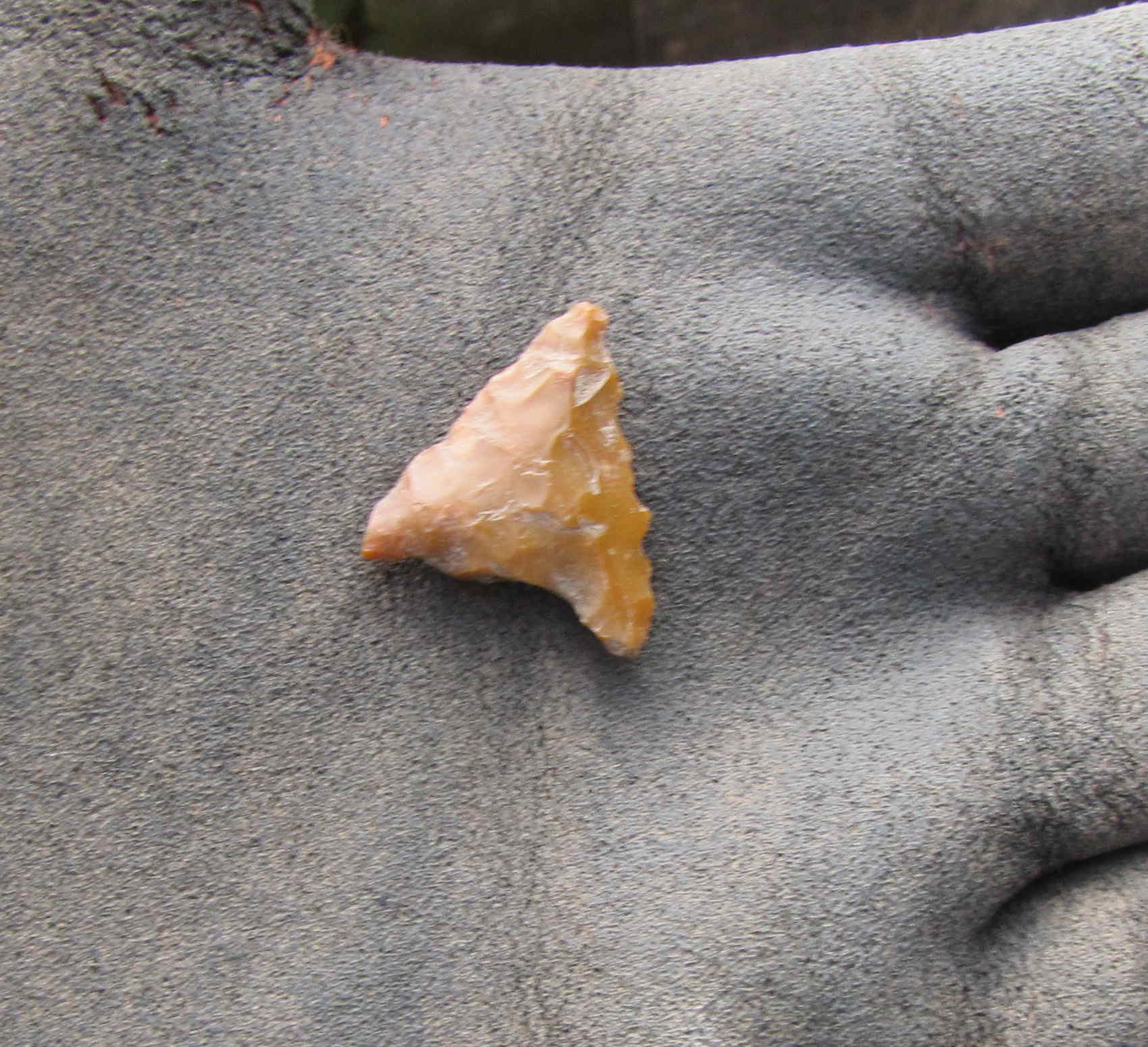 Coins continued to be found, ending up with 14 in total, all from the 1600s. All sorts of explanations for these coins are being considered. Less suprisingly, some shroud pins emerged. 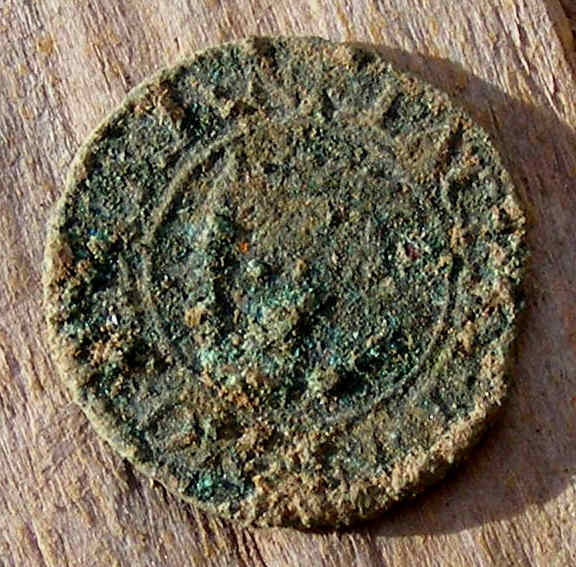 The head of another coin 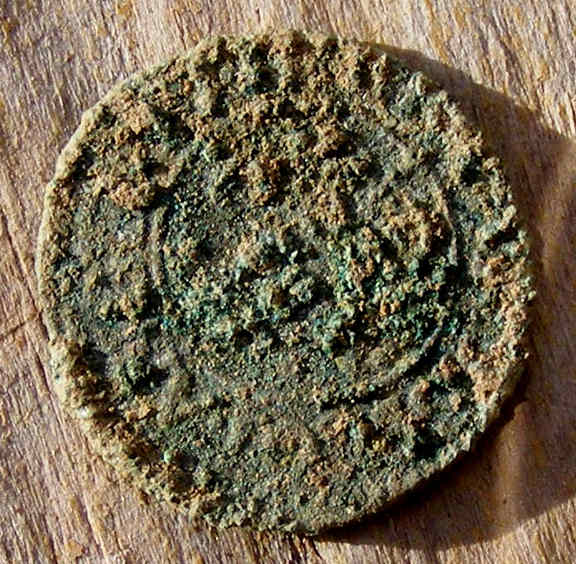 The reverse of the coin 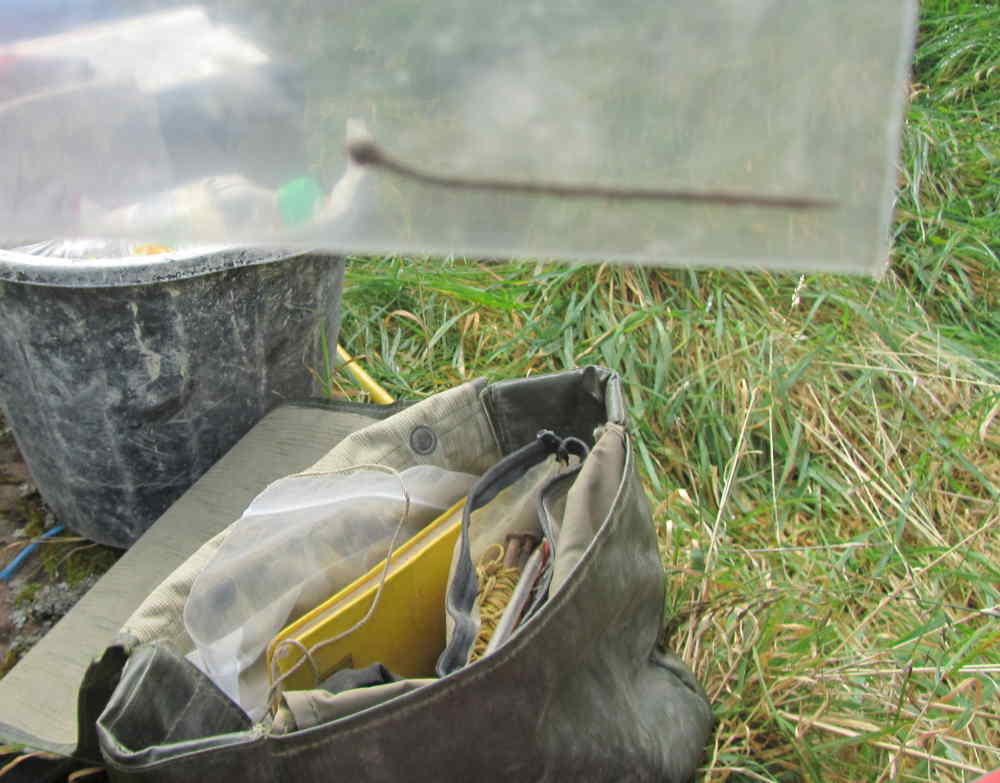 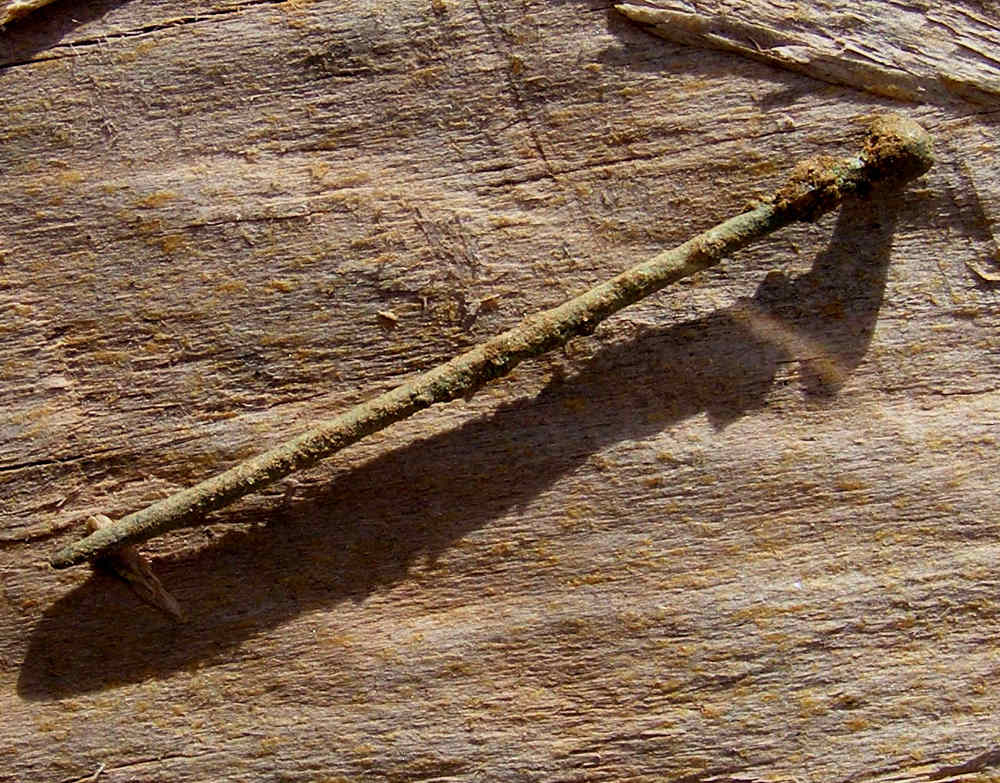 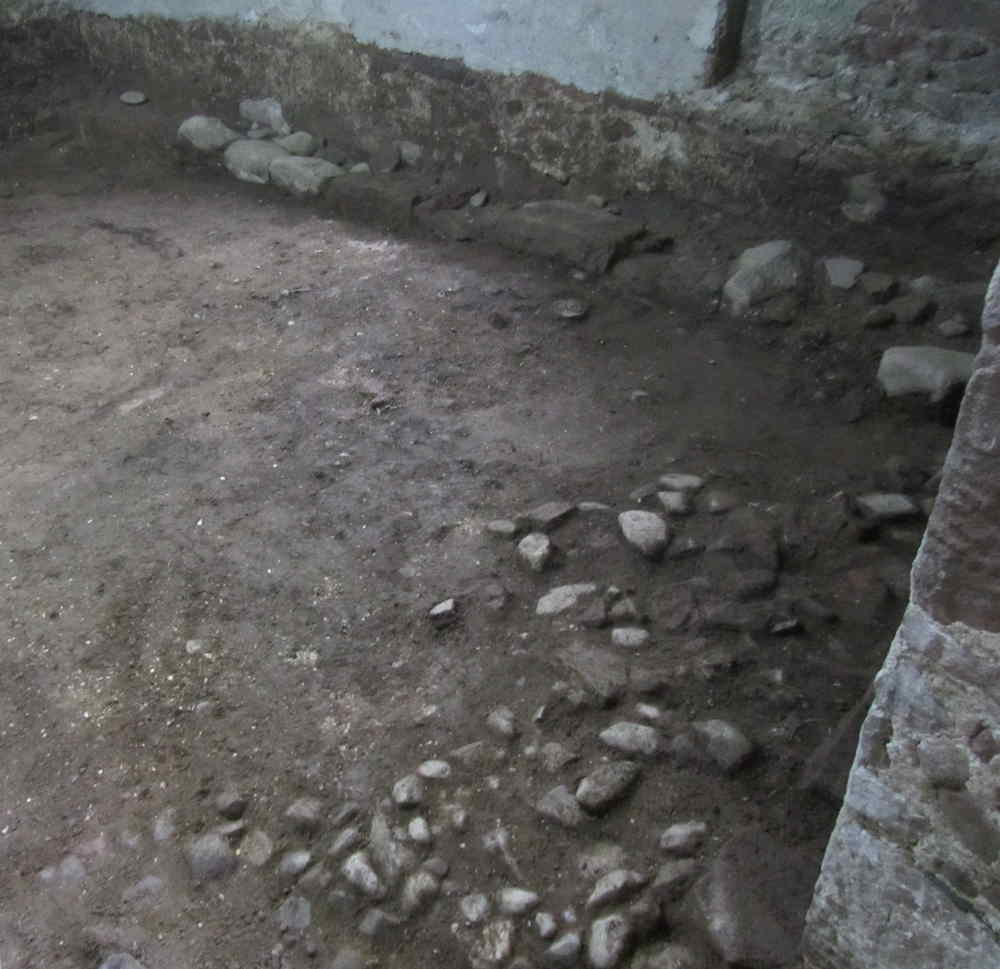 Former wall base on south side, and scatter of stones on floor; photo: Jim Mackay

We were hoping that the archaeological exercise would throw up the missing sections of our Charles Regnart marble memorial to George Gun Munro. Our diggers did not disappoint us! Curiously, the section bearing ornate buds, although discoloured, is in good condition, but some of the longer sections separately found seem to be curiously soft – the ground conditions at that point, or was this part of the memorial of different material? Possibly an earlier repair? Whatever, we were delighted when these long-missing sections reappeared. 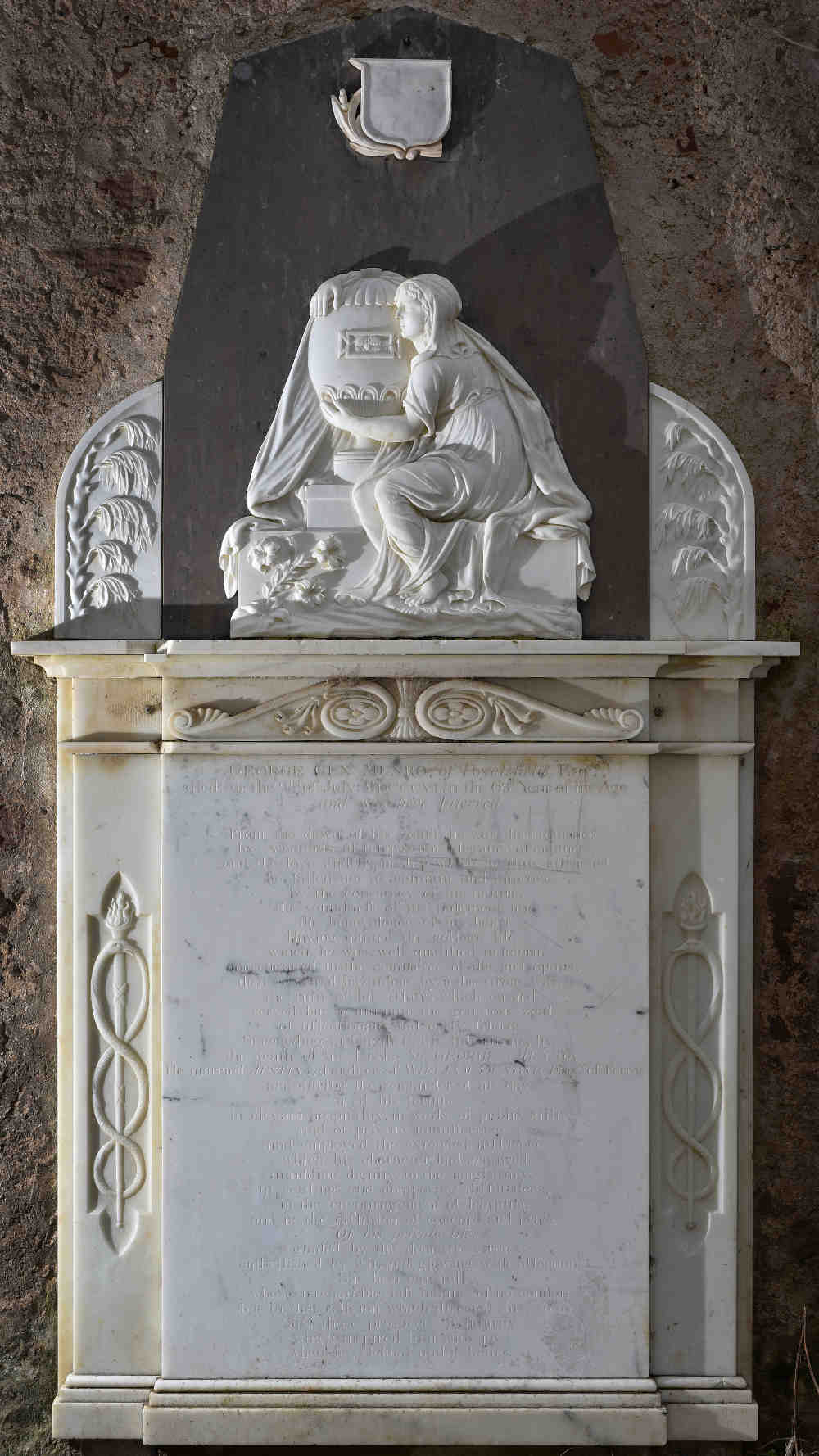 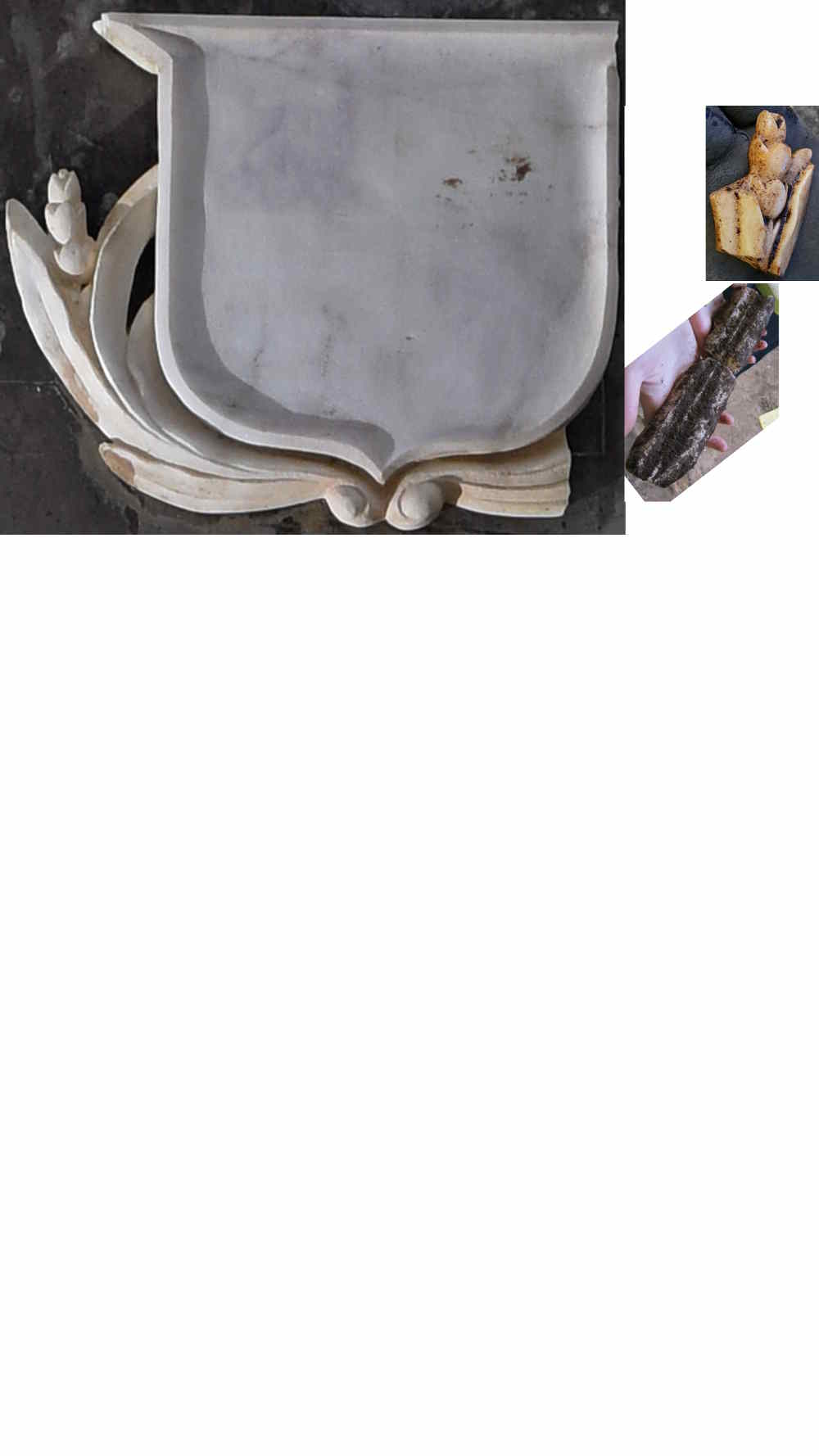 Finding the buds in particular was a marvellous discovery, allowing us to put our wonderful Regnart sculpture, damaged presumably in an earlier roof fall, back together again.

Two curious finds were a thimble – perhaps once mislaid in a fold of shroud – and two tiny rings. 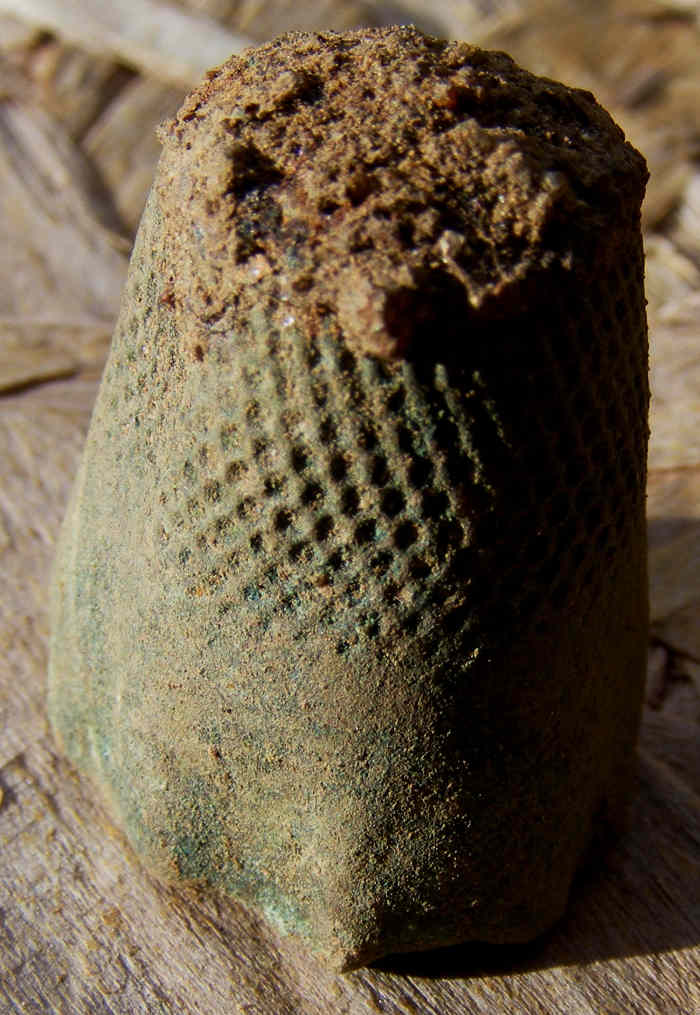 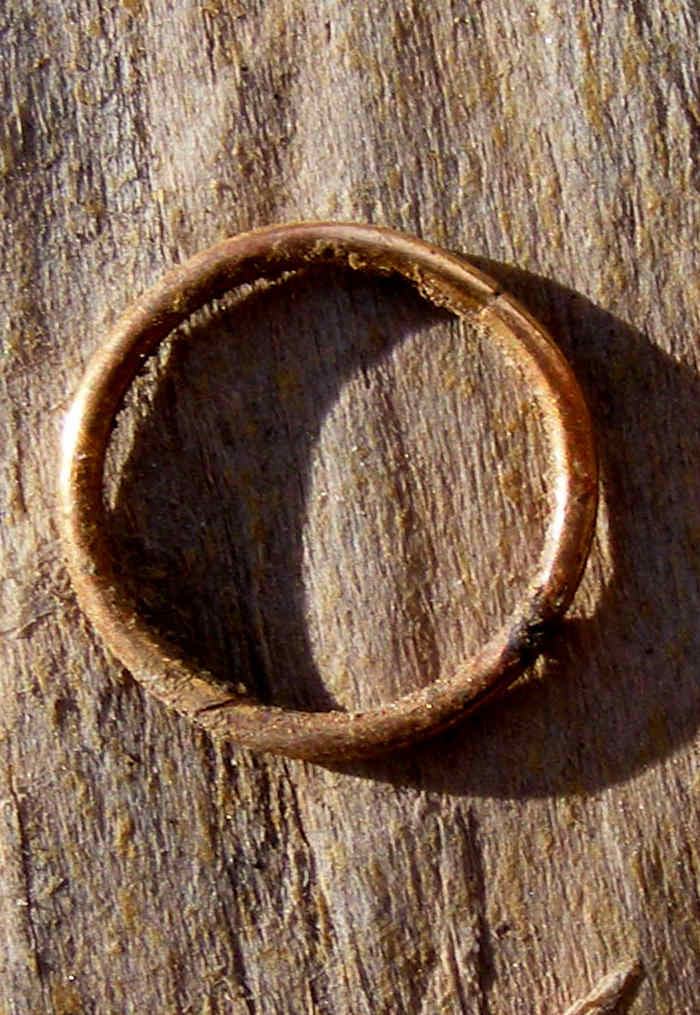 one of the two tiny rings found

Deep under a layer of grave-diggers’ surplus spoil, the archaeological volunteers discovered strange wooden structures, at the bottom of which rotting vegetation was found. These have been puzzled over, and their similarity to mushroom beds noted. They had been constructed from shortened fenceposts and planks. Had enterprising parishioners been using at one time the dark, sheltered, and largely unused mausoleum as a location for growing mushrooms? 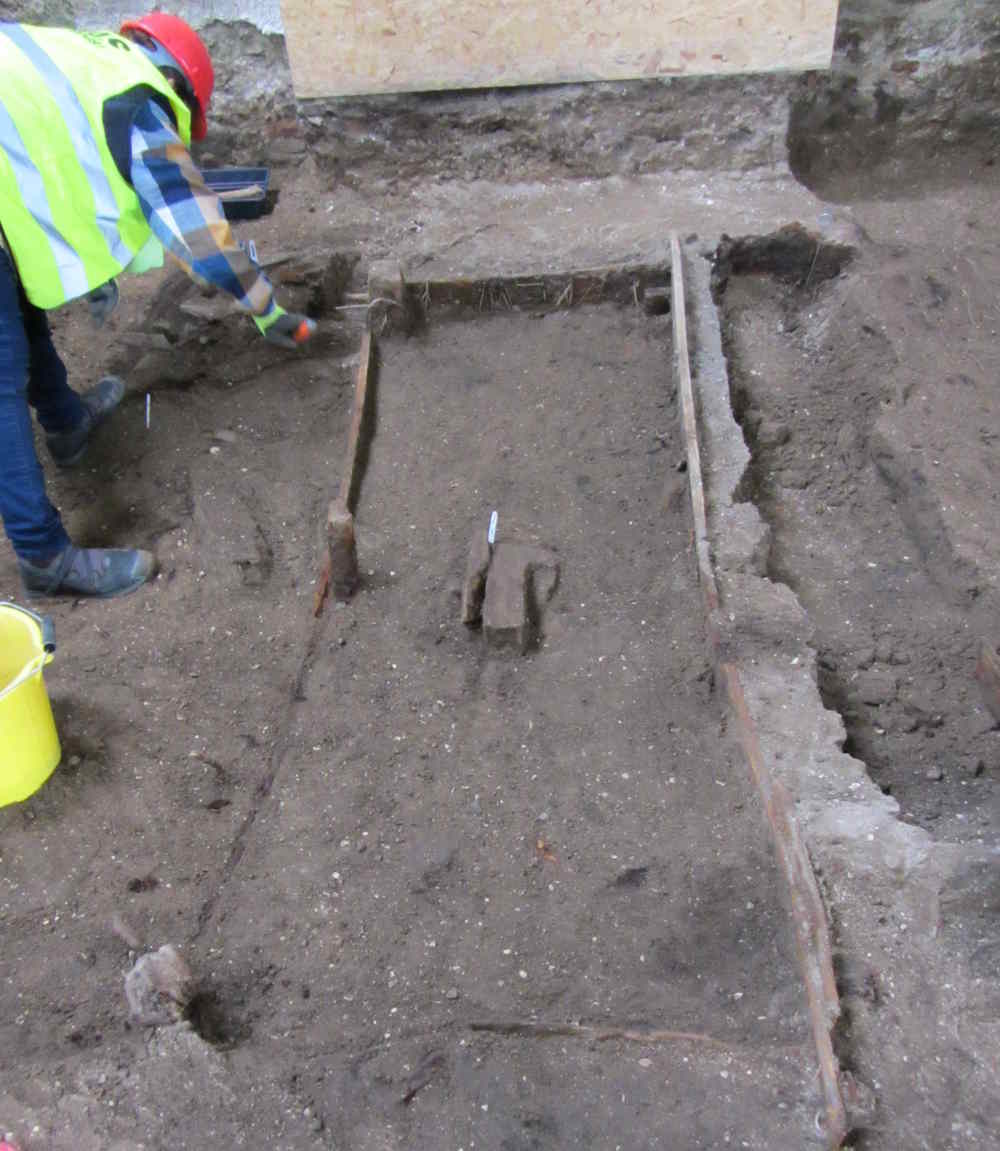 Most of these finds were discovered in the nave, where surplus soil had been deposited by the gravediggers over many years. In contrast, very little was found in the chancel. All these remarks on the finds of course are first impressions, and our archaeologists will be considering them in more detail and writing a technical report in due course. For now, again, many thanks to the hard-working volunteers who helped in the restoration of Kirkmichael, and gave us lots of information on the site which we never had before. 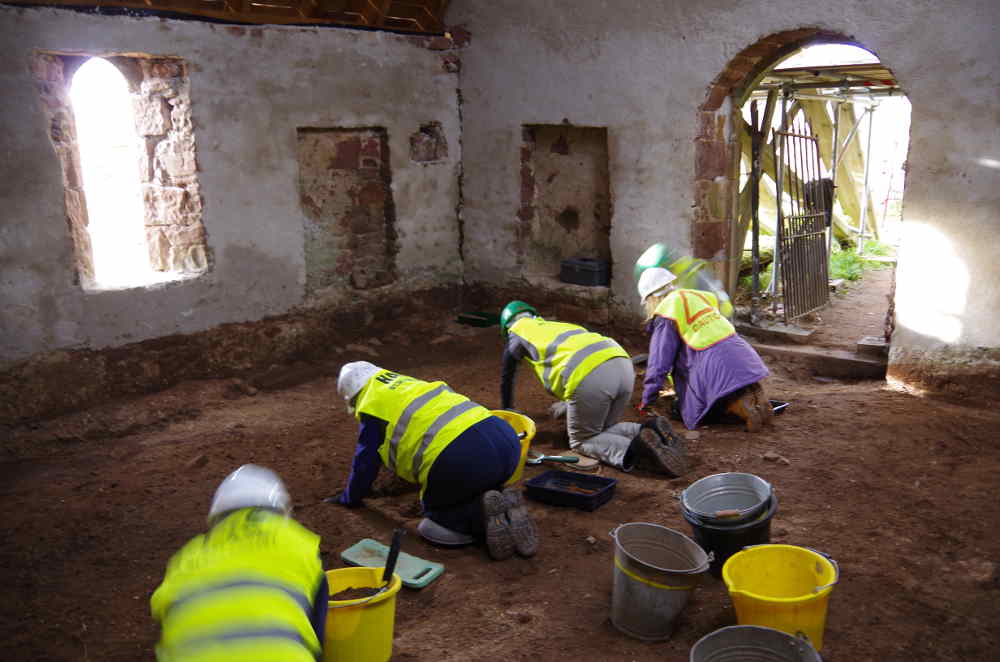 We had avidly scanned our e-mails. We had surfed all the relevant web-sites and then we found it.

There was a call for volunteers for the dig at Kirkmichael at Balblair in the Black Isle. The important aspect from our point of view was that no previous training was necessary. That was good as we had had none. We had joined the North of Scotland Archaeology Society (NOSAS) and instantly became amateur archaeologists. However with less than one year’s experience we had been taught the basics of how to planetable, draw, measure with tape and offset, profile using a Dumpy but had had no chance to learn how to approach a dig.

We volunteered for the Thursday and Friday of each of the three weeks allocated to the dig, and as the first day approached there was some apprehension. Would we enjoy it, would we, through our ignorance, make a mess of the project. Would it be wet, cold and nasty.

What joy, the induction was crystal clear, Lachlan and Lynne ably assisted by George were amazingly tolerant of the many questions that we raised, and what is more, answered them! The weather, though cool was fine until the third week, when the rain came. The interesting dig within the old church was fascinating. The chat and banter punctuated by amiable silences amongst the assembled volunteers and the professionals present added further to the enjoyment of the whole event, particularly as the silences hummed to the background noise of the huge numbers of magnificent migrating geese circling Udale Bay. On one occasion a flight of swans, sixteen in number, honked their way over our heads.

What did we learn? Controlled trowelling, spoil clearing, sieving, find labelling, site drawing and photographing to add to our previous experience in profile recording with the Dumpy. What did we offer? Some muscles in shifting many tons of earth, and possibly a little bit in expertise in identifying some skeletal remains from our training in medicine. What did we get from the experience? New bits of knowledge obviously, some additional skills and a huge degree of satisfaction from being a small part of a wonderful team which was fostering an appreciation of local history.

thanks to Steve and Madeleine for sharing their experience with us!