The John McComie Slab – an exercise in photogrammetry and raking light

It always catches your eye as it is an unusual shape for a grave slab, on the sheltered south edge of the central yews at Kirkmichael. It had clearly been carved before the six foot by three foot rectangular slab had become standardised. The deeply indented panel with its raised symbols of mortality and the two corners trimmed off its base gave it a unique look. But beyond the obvious column of initials on its central area we had never been able to read the inscription. And yet lettering could be made out faintly all the way around the perimeter… 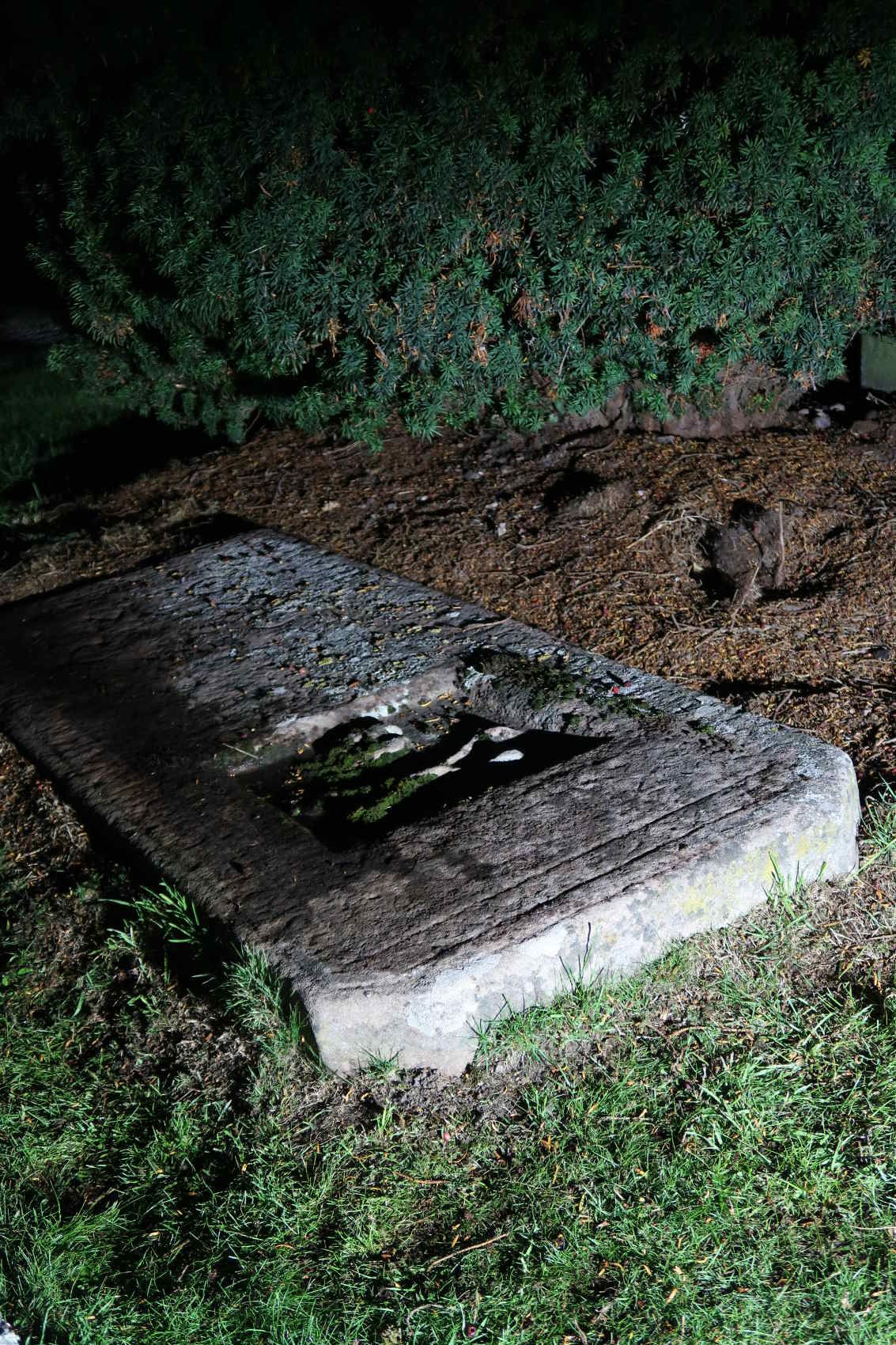 In late 2018 we decided that we would take up the challenge and see what we could recover of the inscription. Weeks of work by Andy Hickie and ourselves followed, Andy using photogrammetry and ourselves using oblique light at night. Through a combination of both we managed to get just about all the information off the slab proving what can be done if you are prepared to put the time and effort into a project.

The night we chose for the oblique lighting was just after Hallowe’en, and it must have looked quite eerie to passers-by seeing a light glancing around the kirkyard in the darkness. I have to say I don’t like being in graveyards in the dark myself, but there was the steady Davine to hold the Kirkmichael Lampie. The technique I use is to place the lamp so that bright light from a distance rakes different parts of the stone from every possible angle. I take hundreds of photographs to be studied later. In contrast, photogrammetry doesn’t depend on oblique light – quite the reverse. Lots of pictures are taken as well, but in diffuse non-directional light and incorporated within a computer model. The computer works away on the data overnight, so that in a way it too depends on the hours of darkness! 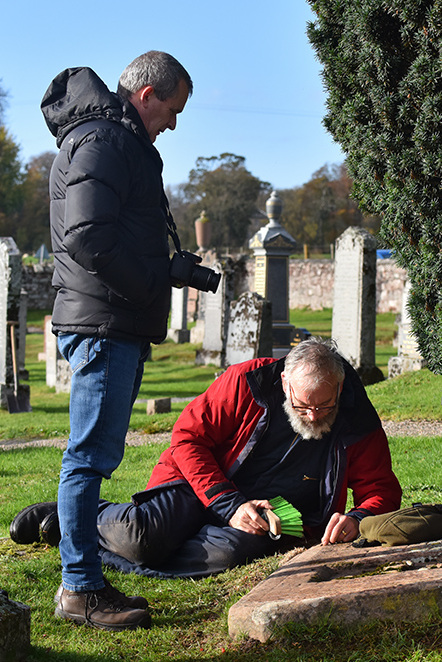 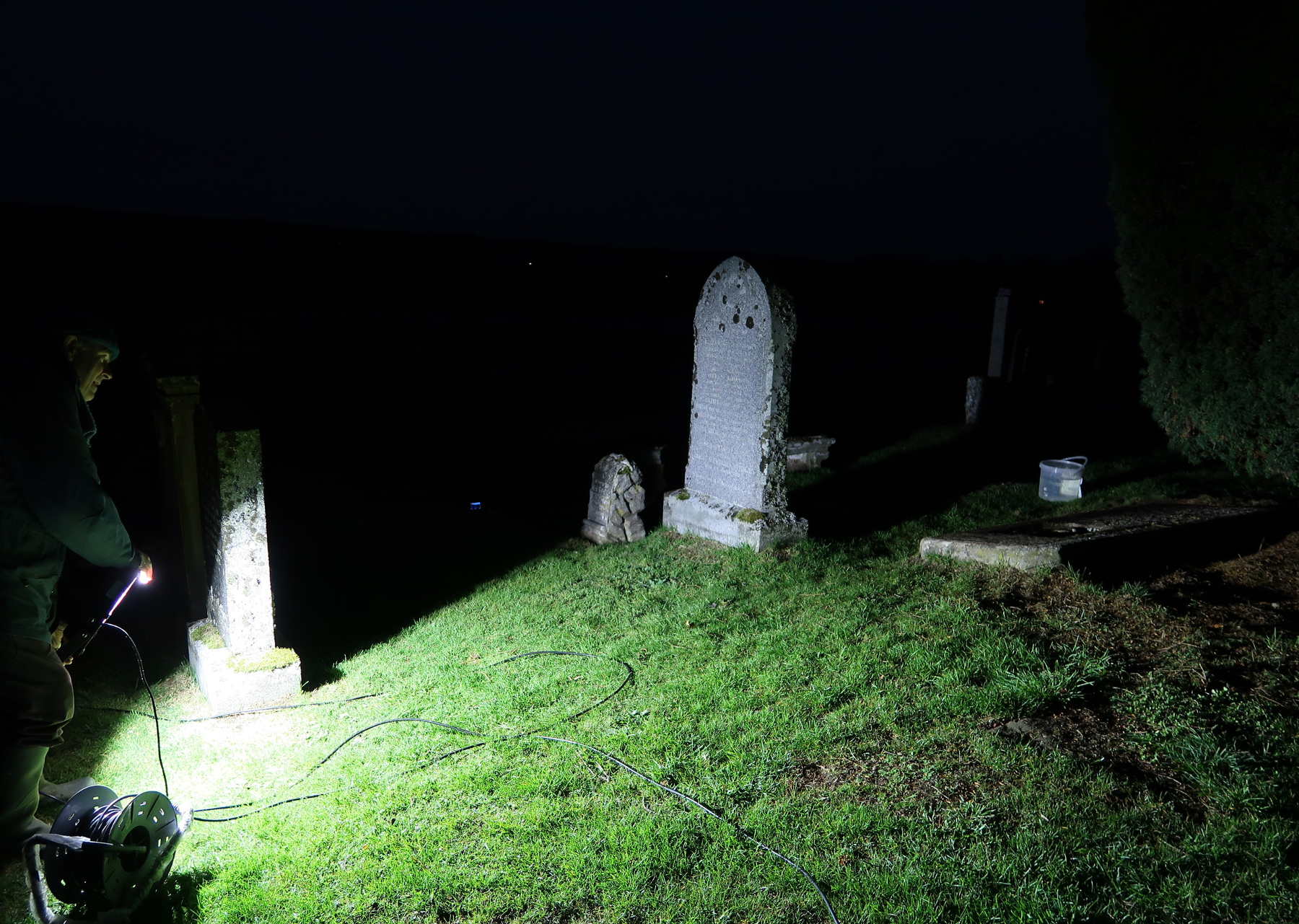 The spooky scene as the Kirkmichael Lampie is deployed for raking light treatment. Photo: Davine Sutherland

The information was slowly teased out. The text on old stones usually starts on the top left corner and proceeds around the perimeter clockwise. On this one, yet another difference, it did indeed proceed clockwise, but from the top right corner.

The husband was thus one John McComie (ION McCOMIE). The details of his spouse, on the left hand perimeter were much more difficult. The bottom perimeter ends with • AND • so we have:

We were stuck there for a long time and it took a great deal of effort with both photogrammetry and raking light to extricate her surname as MONRO. The raking light images are set out below – the secret is to look for the incised elements – pay less attention to the raised sections. These letters were originally carved deeply into the stone.

The date of Christiana’s death was the easiest part, two lines at the very top of the stone:

We returned to the foot of the slab to see if we could recover the year of death of John McComie himself. Near forensic investigation finally convinced us, from both photogrammetry and raking light, that the year was 1689.

The inscription, as developed through a combination of photogrammetry and raking light, thus reads:

A yew was planted beside this slab more than a century ago. Presumably because the stone for the past few decades had lain below the canopy of this yew, it had developed an unusual combination of tough moss and lichen. We have no compunction about removing moss, but never remove lichen as it bonds so closely with stone that scraping it off damages the memorial. However, we had noted that when the plywood that had surrounded at-risk memorials whilst building works were going on in 2017 was removed the slabs emerged completely free of all moss and lichen. It was an astonishing transformation. With the McComie slab, we thought we could try a small experiment with the bottom right edge, and have covered it in some turf – we’ll add to this report in a few months! And at the same time, we’ll re-visit the letters below the cut-out panel which I think we can get clearer.

The discovery from the perimeter that the stone was erected by John McComie allowed the column of initials clearly carved in the centre of the panel to be re-visited. “J” on old stones is usually represented by an “I”.

We can assume this column represents three generations of McComies, all called John, marrying ladies of initials CM, ID and IR. The first combination would be the names on the perimeter: John McComie (ION MCCOMIE) who died in 1689 and Christiana Monro who died on Christmas Eve 1707. Their son I McC, presumably another John McComie, married a lady with initials ID, and their son I McC married a lady with initials IR, and it is likely that either he or she died in 1781. I say in each case “son” but it is quite possible that another branch of the McComies could have taken over the stone at each stage – ownership of lairs and stones was transient in Kirkmichael!

There were once quite a few McComies in the area. From the quality of the stone, this particular family of McComies must have been of some significance, tacksmen or successful millers or blacksmiths, perhaps. And there was a John McComie who was the tacksman at Newhall. However, I have thus far failed to flesh out the line of descent summarised by the column of initials. I have extracted McComie information from estate rentals, presbytery minutes, church registers, court cases – all the usual and less usual sources. I shall not bore you with possibilities and guesswork. When hard evidence turns up, then this Story will be updated!