The very fact that she was named Sally suggests she might have been from Sutherland. It was popular as a name in its own right, rather than as the diminutive of Sarah, in areas like Lairg and Assynt. And her husband, Gregor Macleod, even had Assynt mentioned on the stone.

It was easy enough to take a look at poor Sally’s death certificate to see if we could tease out a bit more about Sally and Gregor:

The wasting disease of phthisis or tuberculosis, commonly TB, was a dreadful scourge in that era. Whole families might be wiped out by it, or it might just affect one member of the family. In this case, Gregor the husband went on to have a long and fruitful life whilst Sally was struck down aged only 24.

Gregor must have had the tablestone erected well after Sally’s death as he had managed to forget the exact date of her death. He didn’t forget her, though, and I note that after he had remarried, the very first girl that he and his second wife had they named Sally McKay McLeod. And the tablestone, a good quality one at that, stands in a desirable part of the kirkyard (nowadays right beside the main path to the chancel). This was some tribute from a poor young shoemaker!

Tragically, they had married not that long before. Gregor had been living at Jemimaville, created as a new village in the 1820s and still in the 1850s seeking to attract tradesmen. Having established himself in Jemimaville, he returned to the north for his bride. They married in Lairg.

Note that when it says Sally’s father was a Pensioner, it means Army Pensioner. Curiously, the marriage certificate has been completed as if Gregor had signed his own name, when he could not write. He signed himself with a cross on Sally’s death certificate. And when he registered the birth of his later children he used a cross as well. The Lairg Registrar must have facilitated the process! The sad fact that emerges is that Sally had died less than a year after her marriage.

Gregor McLeod of Assynt and Jemimaville

Following Sally’s death, Gregor appears to have given up on his Black Isle life and returned to Assynt, living on his parents’ croft. He re-married a few years later a girl from the immediate vicinity in Elphin. 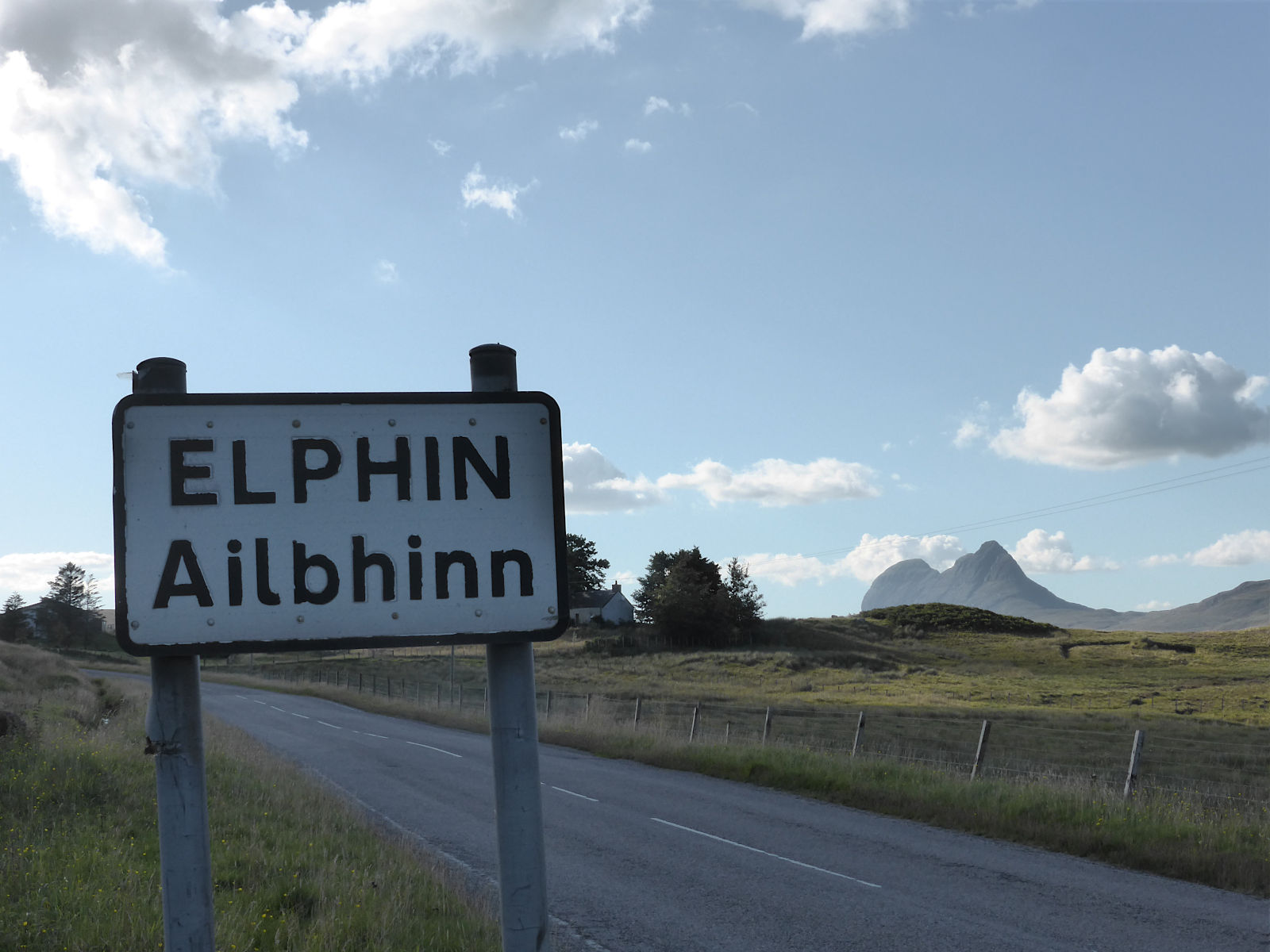 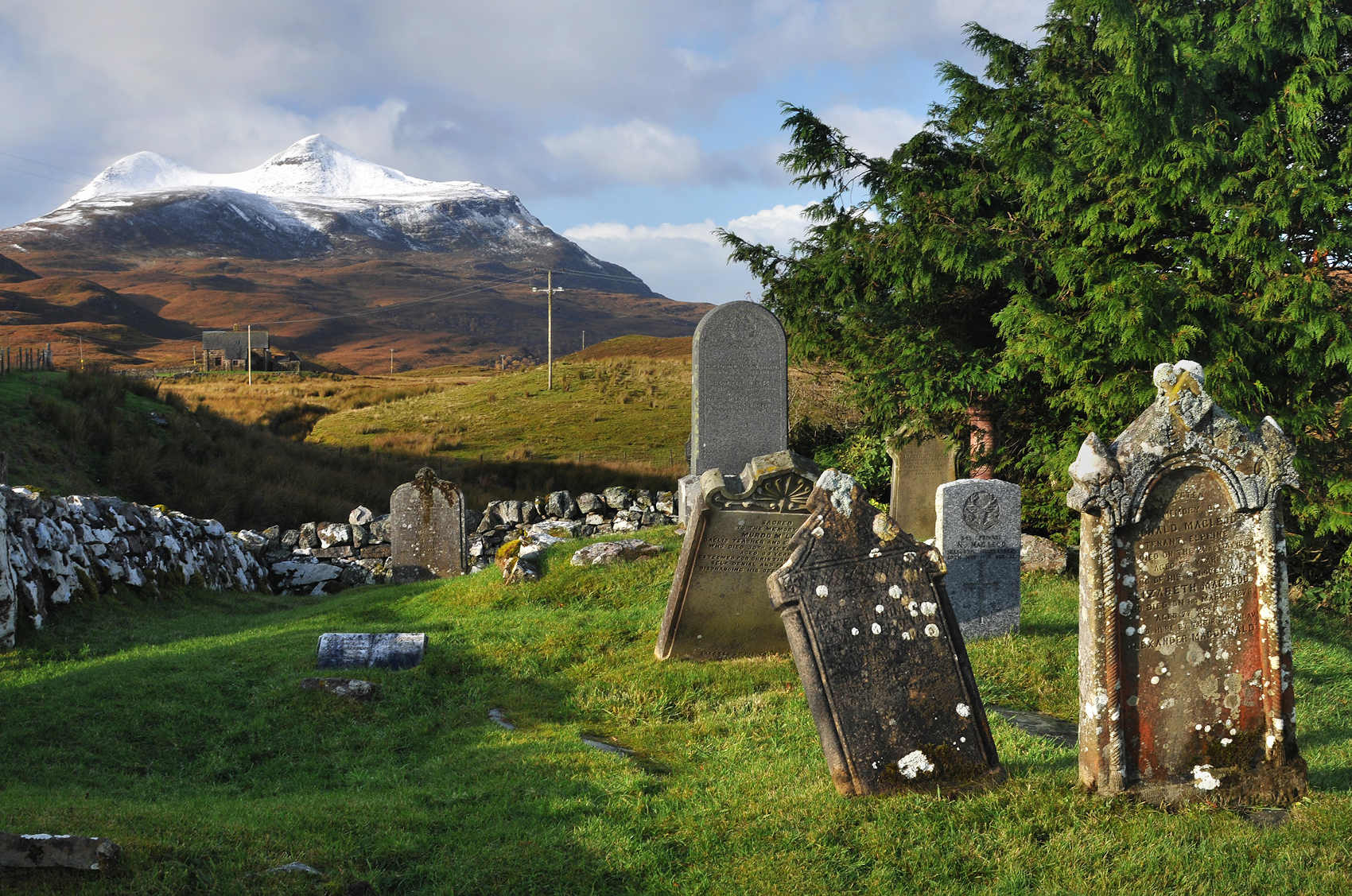 the tiny graveyard at Elphin; Macleod is the name on most of the headstones, although later inhabitants like Gregor McLeod were buried at the more distant Inchnadamph graveyard; photo by Andrew Dowsett

This second marriage demonstrates what you would expect from an Assynt marriage: an extraordinary preponderance of Macleods! Just look at this:

Knockan and Elphin are two tiny crofting townships about half a mile away from each other in Assynt, a couple of miles south of the Ledmore Junction. They tend just to be grouped together as Elphin nowadays but once they were separate communities. The area is popular with both hillwalkers and cavers. It is spectacularly surrounded by Cul Mor, Canisp, Suilven and the Ben More Assynt complex, and the Assynt limestone is riddled with caves – the Grampian Speleological Group had an eccentric old hut just up the hillside from the main road, although its new centre is a more sophisticated converted crofthouse. The area is thus ideal for the two extremes of outdoor experience – one going up, one going down! Regarding caving, I have to say that having spent a weekend based in the old hut at Knockan and crawling through narrow, wet underground passages, I did feel the draw of the caves, but I do prefer the airy heights of the hills! 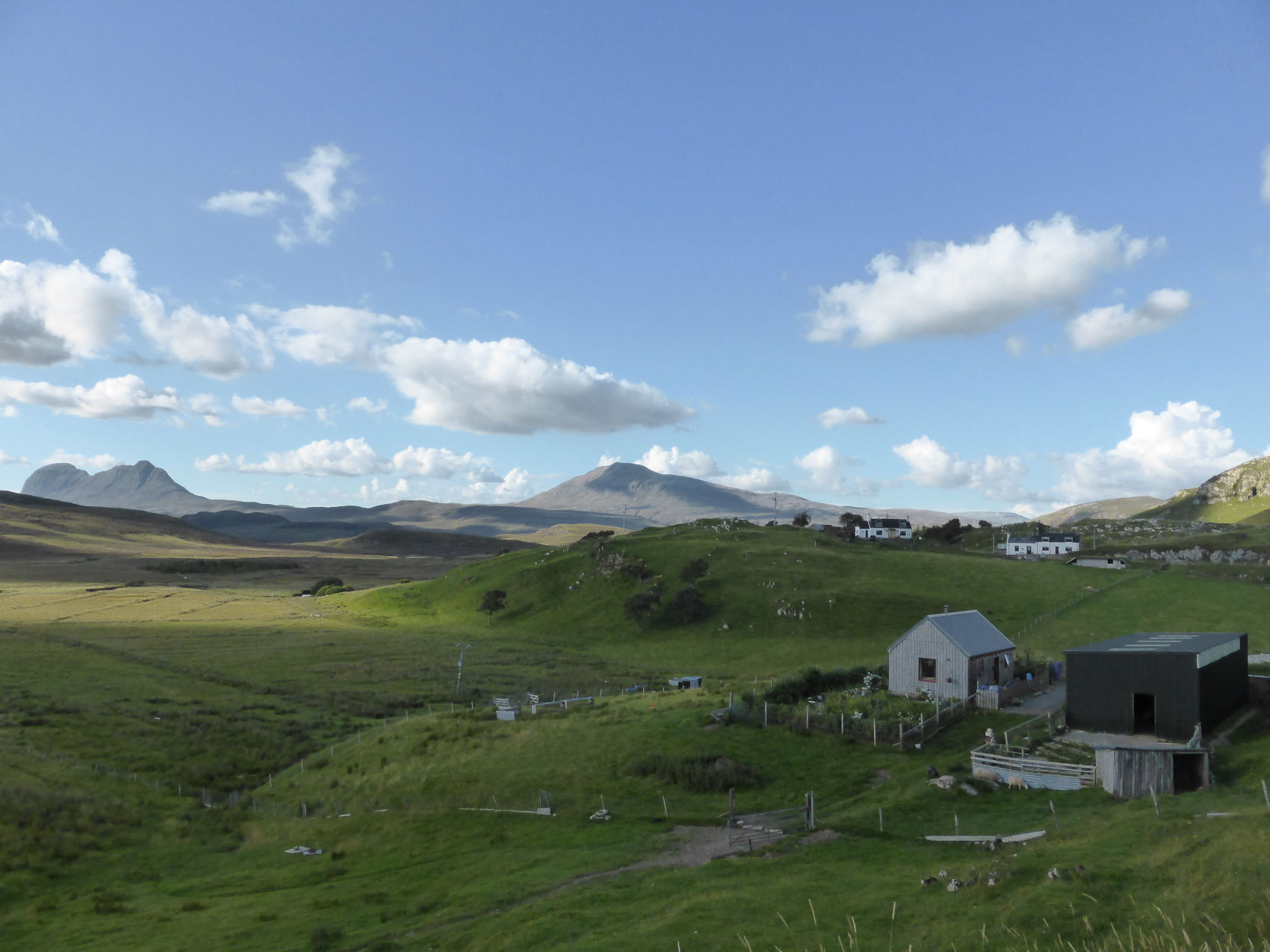 a community surrounded by moorland and hills; photo by Davine Sutherland

Assynt of course was notorious for clearances by the Sutherland Estate, when sheep and deer replaced people. It is hard to believe now when passing through the landscape of rock and water and heather that it was once well populated. I see that Gregor spoke at a meeting of the Sutherland Association (which fought for crofters’ rights) at Elphin in June 1887 (Highland News, 18 June 1887). Many fiery words were spoken that night – “The Kaffirs were better off, as they could remove from kraal to kraal though their land, but they in Elphin if they built a good house and the necessary farm offices, the site would cover half the area of their croft.” But there is no record of what Gregor himself actually said at the meeting. 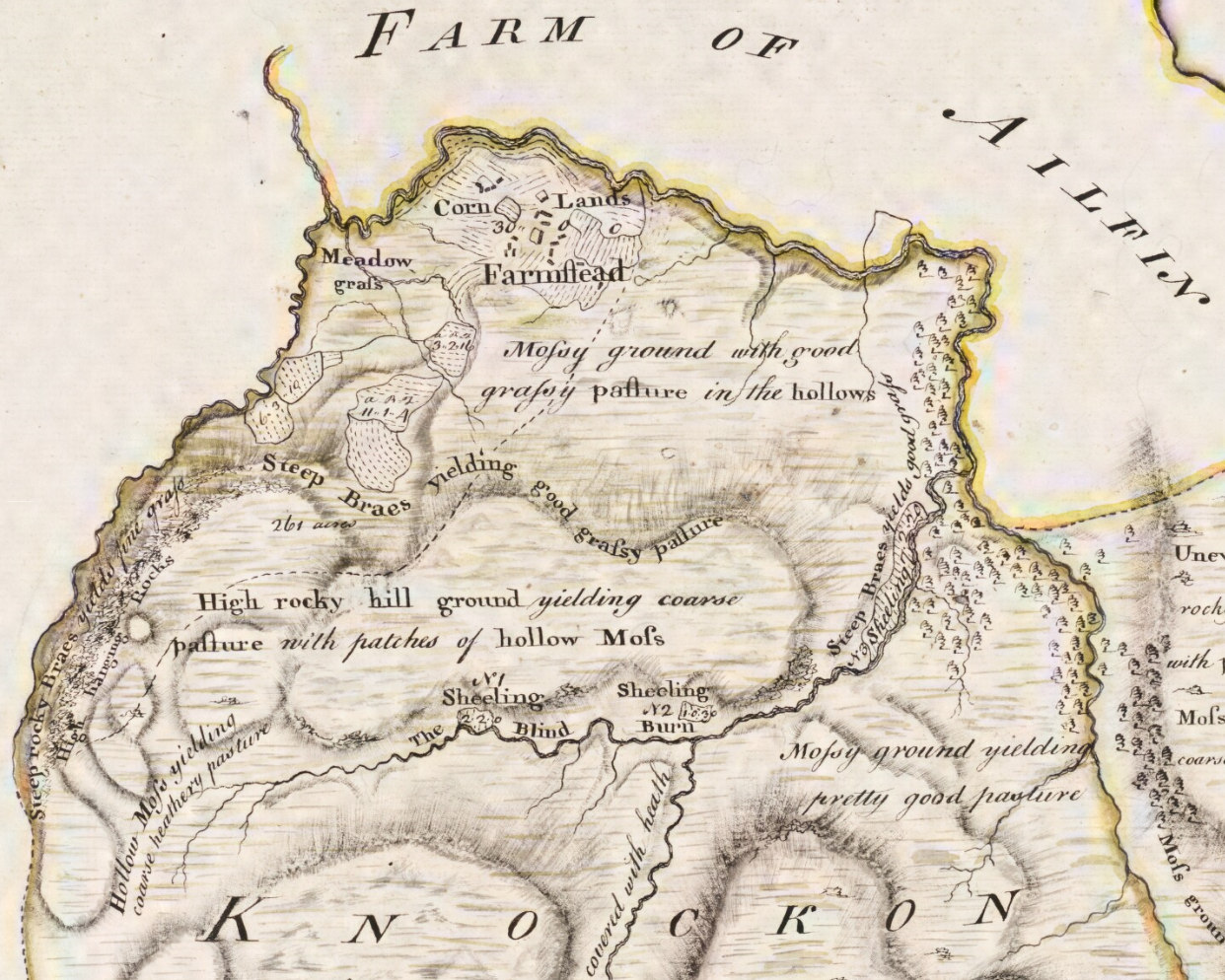 Knockan in 1774, from the Survey of Assynt by John Home in 1774: No. 16 – Plan of the Farms of Knockon, Aultnachie and Cromald; courtesy of National Library of Scotland 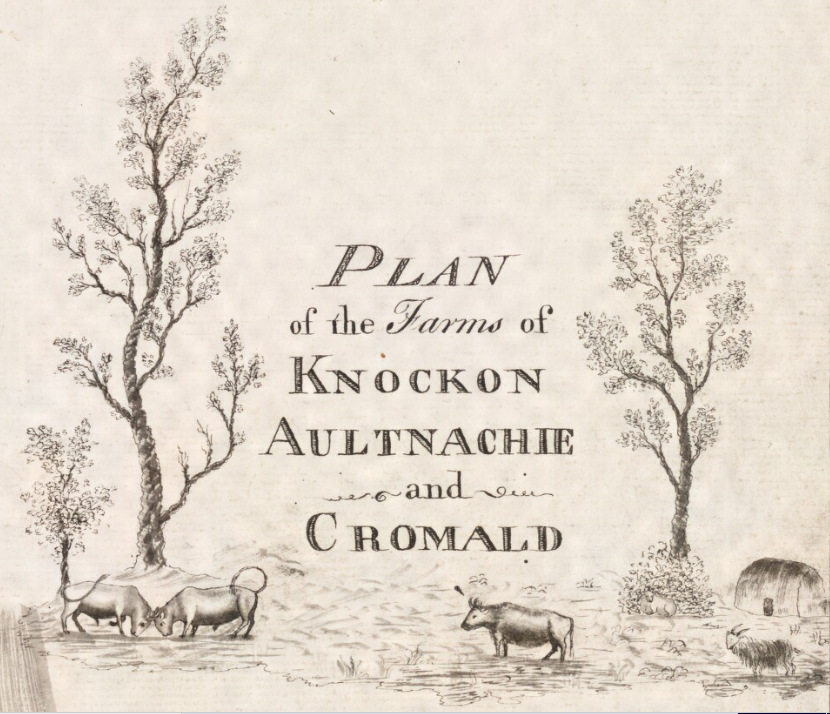 indicative embellishments on the estate plan, from the Survey of Assynt by John Home in 1774: No. 16 – Plan of the Farms of Knockon, Aultnachie and Cromald; courtesy of National Library of Scotland 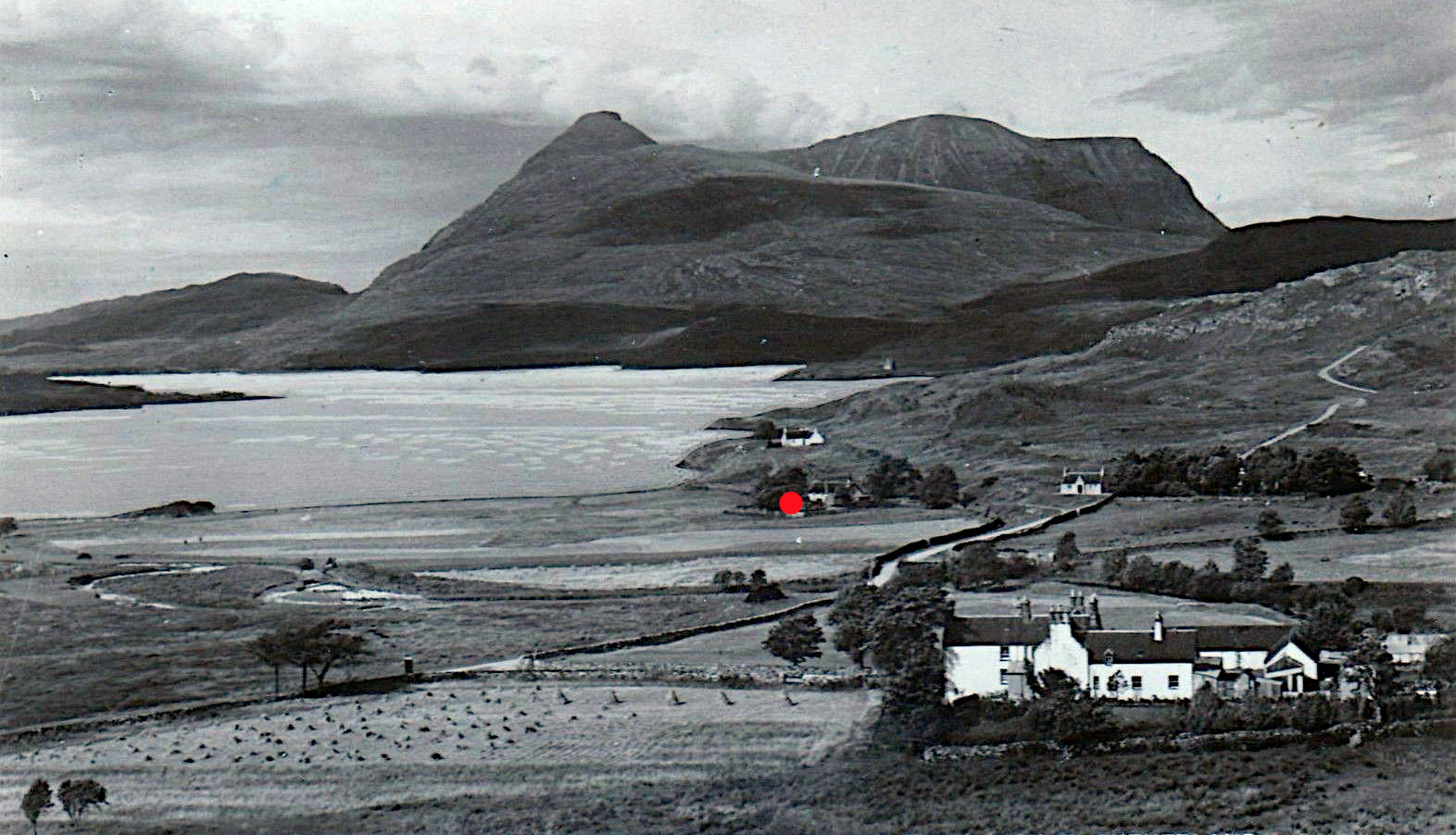 The spectacular location of Inchnadamph burial ground (spotted in red) in which Gregor McLeod and second wife, Catherine McLeod, are buried

Poor Sally McKay is not even mentioned. His second wife Catherine died in 1920, and the pair are buried in the graveyard at Inchnadamph. 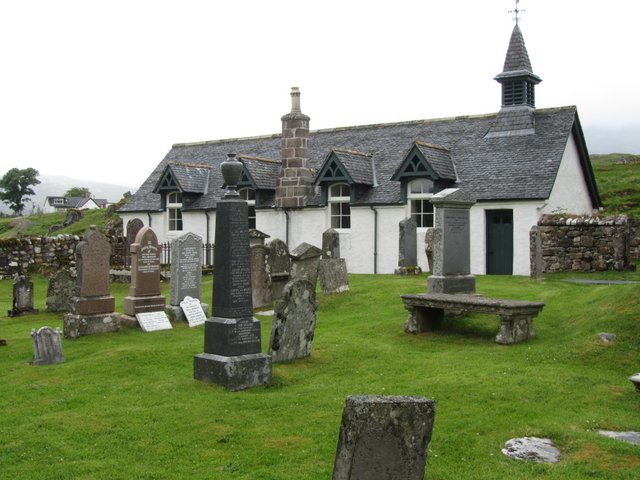 While Gregor was from Knockan, Sally herself was born in Lairg: 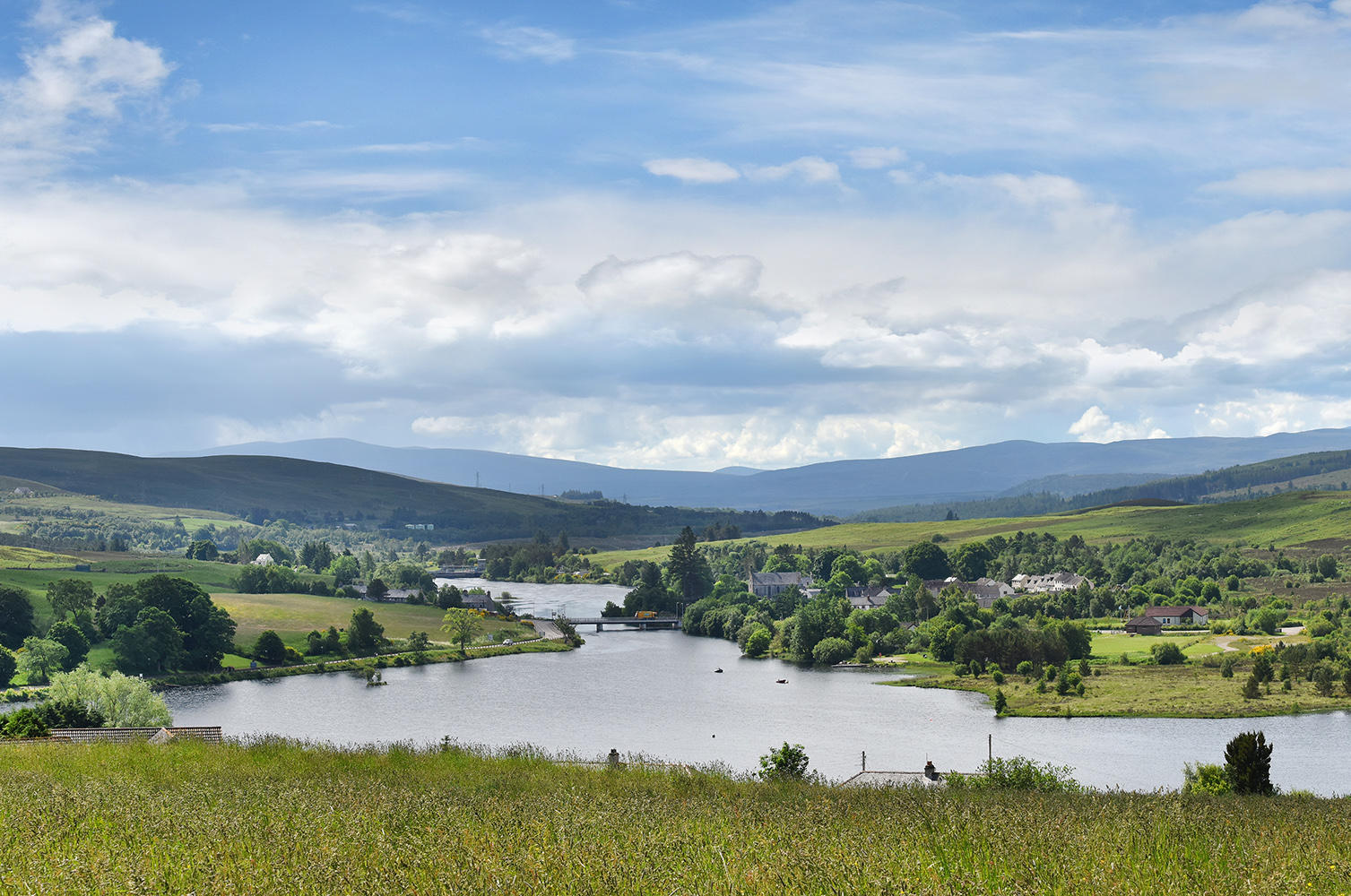 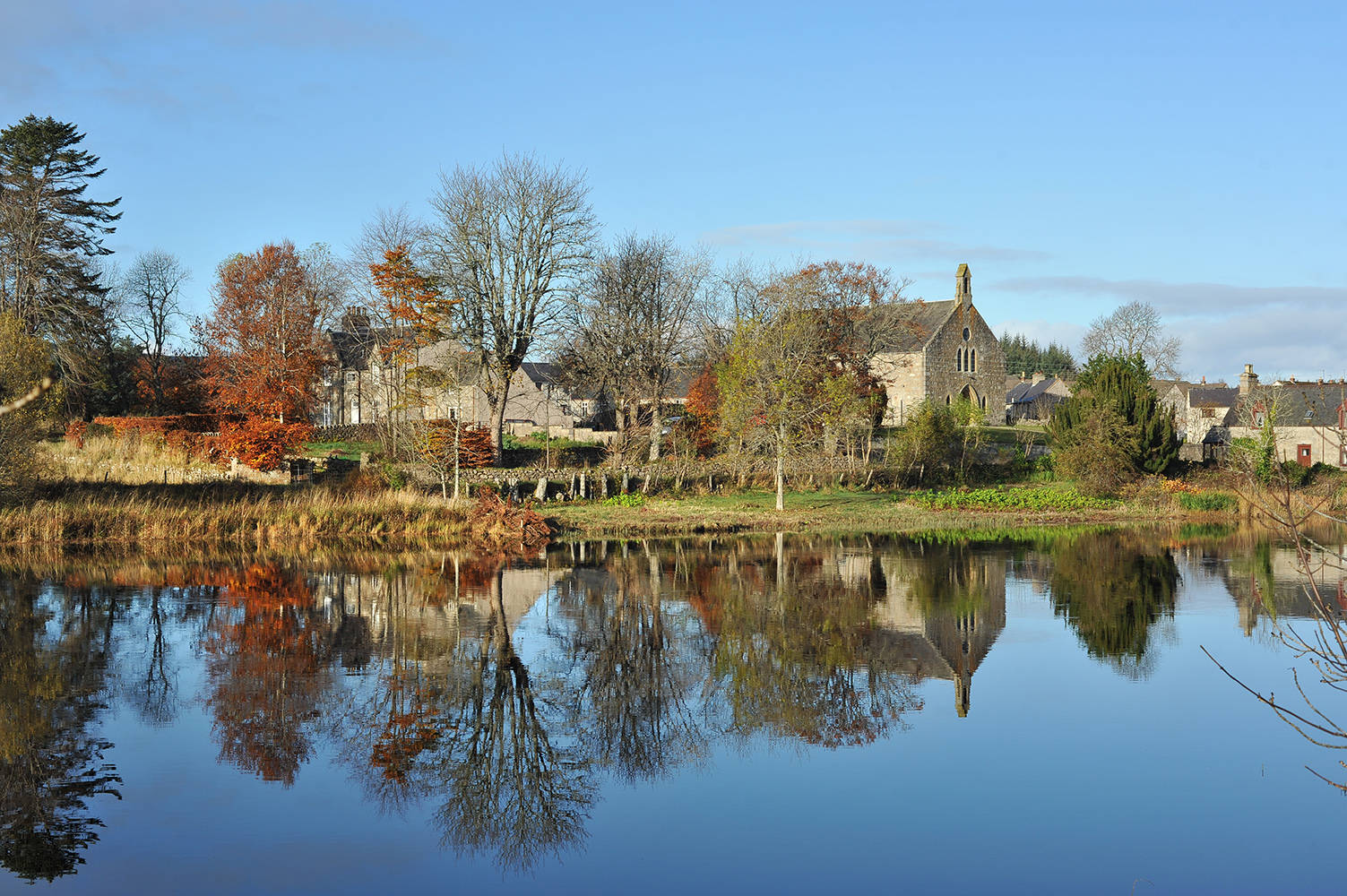 Lairg has developed due to the intersection of major routes in the Northern Highlands, early benefiting from a railway station. The sheep sales at Lairg are of colossal scale. Sally’s death certificate says her father was a general merchant, by which I take it (and I might be wrong) that he was a shopkeeper selling a range of goods. There were quite a few shops in Lairg as it acted as the commercial centre for the area. He had been in the army; I presume this would have been before he married Ann Ross in Lairg in 1826 (“Novr. 3 Alexr. McKay Easter Lairg & Ann Ross Lower Lairg”). The Census takers in the Lairg area were abominable writers, but I did track the family down in 1841 and 1851, still in lower Lairg (although father Alexander had died between these two dates). By the latter date, Sally was working well away from Lairg, up north in Farr.

By 1851, her father now deceased, Sally was already working for her living. She was twenty miles away in the parish of Farr, at “Aultanharrow” (I presume Altnaharra) in the family of gamekeeper John Mckenzie and his wife Isabella – “Sally Mckay 16 Nurse parish of birth Lairg”. There were several young children in the family so I imagine she was looking after the children rather than acting as a medical nurse.

And at some point unknown she met up with Gregor Mcleod and when he had established himself as a shoemaker in Jemimaville, they married in Lairg. Did they meet in Lairg itself? Although Lairg is more than 20 miles from Knockan, it is a stopping point on the route from Assynt to the Black Isle, when you travel via Strath Oykell.

As a matter of interest, after Gregor married his second wife, Catherine or Kit McLeod, they named their very first daughter – Sally McKay McLeod. I was tempted to see what happened to this namesake of the unfortunate Sally who lies buried in Kirkmichael. However, she pulls a disappearing act. She was born in November 1866, and I see her in Knockan, Kirkton Assynt, with her family in 1871 and 1881, but then the lady vanishes. I can’t find a record of her marrying, or dying. I do see a District Nurse called Sally Mcleod in Manish Victoria Cottage, Isle of Harris, in 1901 – who was born in Assynt. Although she gives her age as 29 when she should be 34, nevertheless there can’t be too many Sally McLeods from Assynt! I can’t follow her thereafter either, so if anyone out there knows more, please let me know!

Back in 2017, when we were starting work in tidying the kirkyard, one of the smaller items we had on our list was straightening the top of this tablestone. It had twisted around on its two supports since it had been erected 160 years ago; not to a point where it was dangerous, but it is as well to put things right before they become a hazard.

On 6 May 2017, we had an agricultural digital weighing machine capable of weighing up to two tonnes on site, courtesy of Friend of Kirkmichael, farmer James Holm of Easter Ferryton. It was there to weigh some of the medieval slabs we had at this time temporarily placed on the east side of the kirkyard. But while it was there, we used it to lift the slab of the tablestone, record its weight (509 kg as it turned out) and lower it again so that this time it sat squarely on its two supports. It proved to be more difficult than it seems, as manipulating half a tonne of sandstone to ensure that neither the volunteers nor the stone are in any way damaged takes great care. But it now sits absolutely square on its supports. And we know its weight, in dry weather at least – it would be a lot heavier after rain, of course. 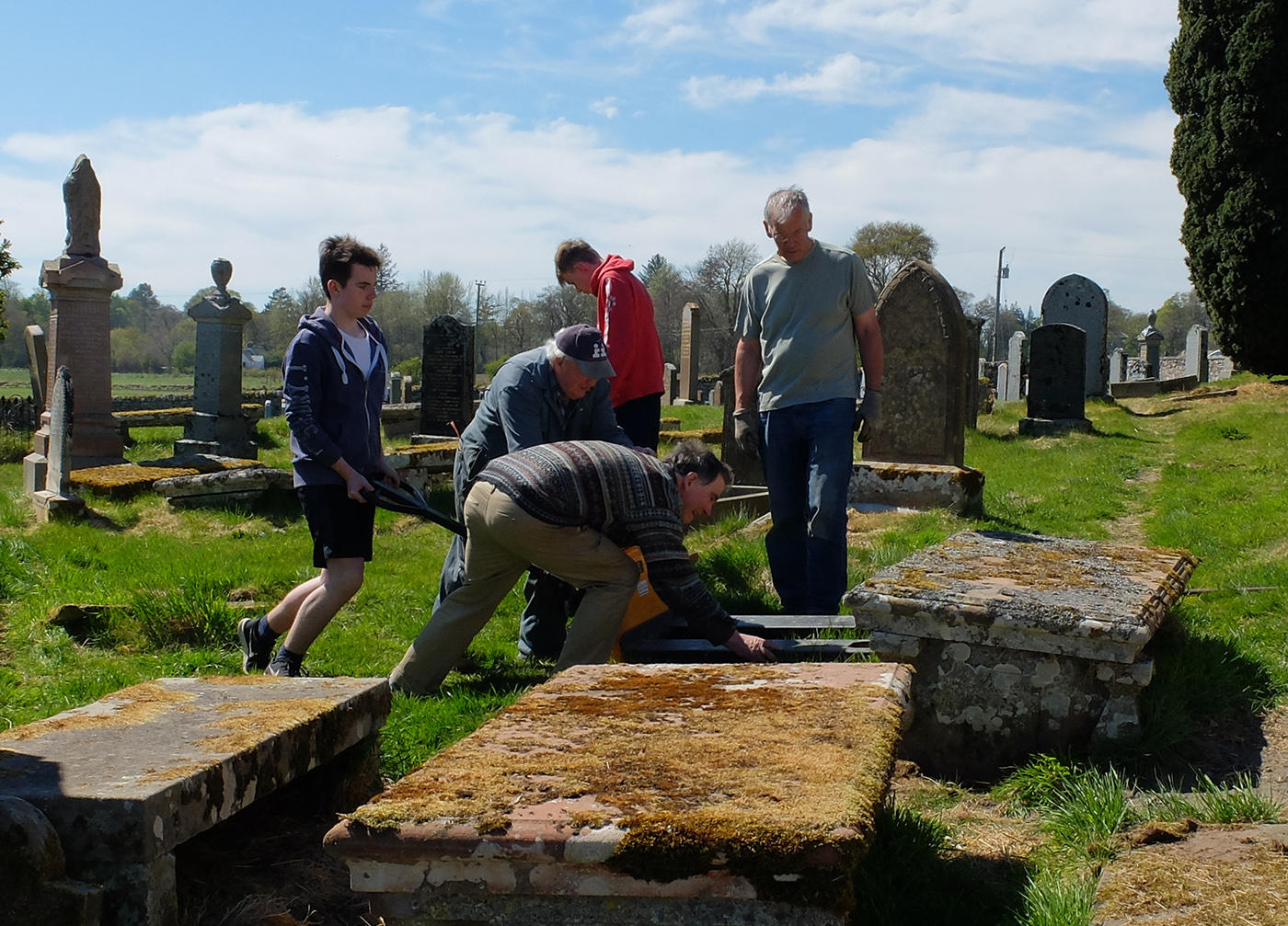 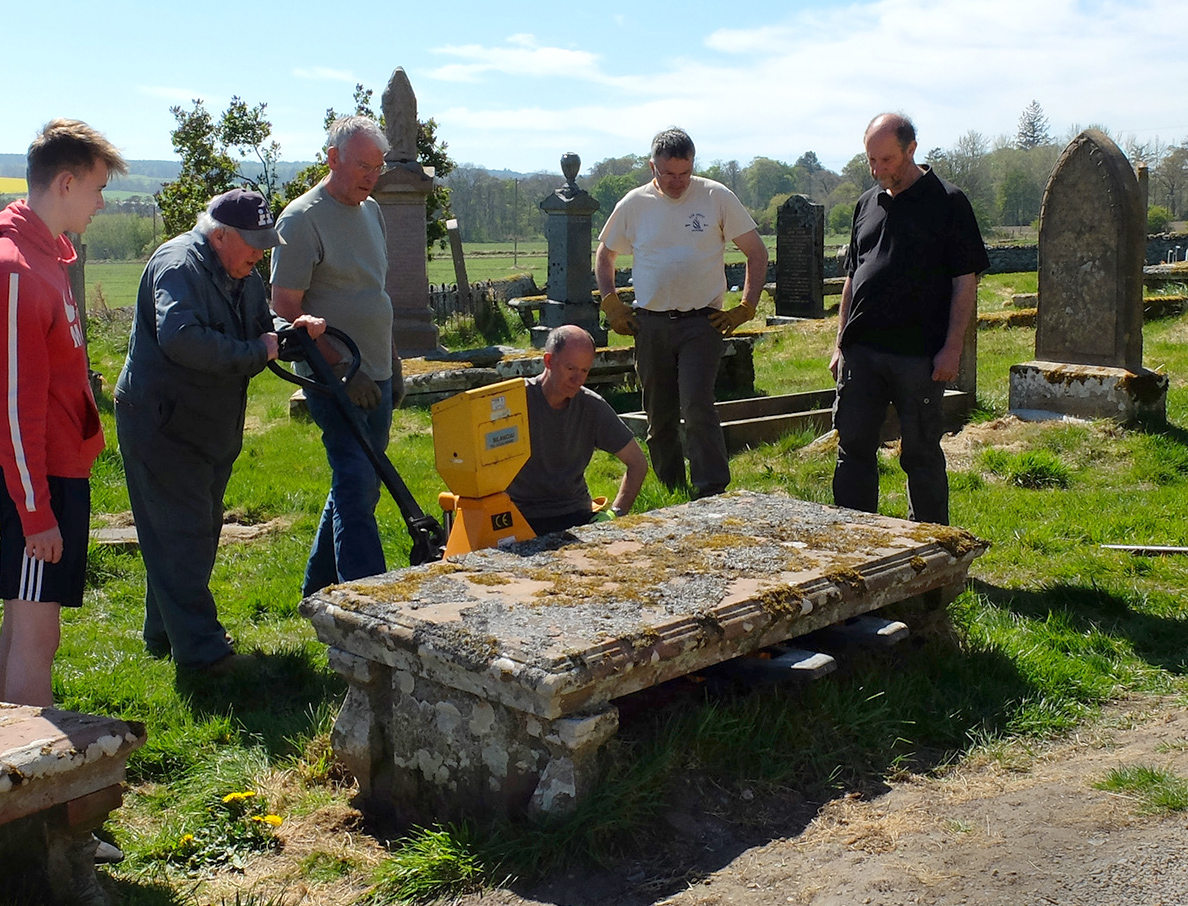 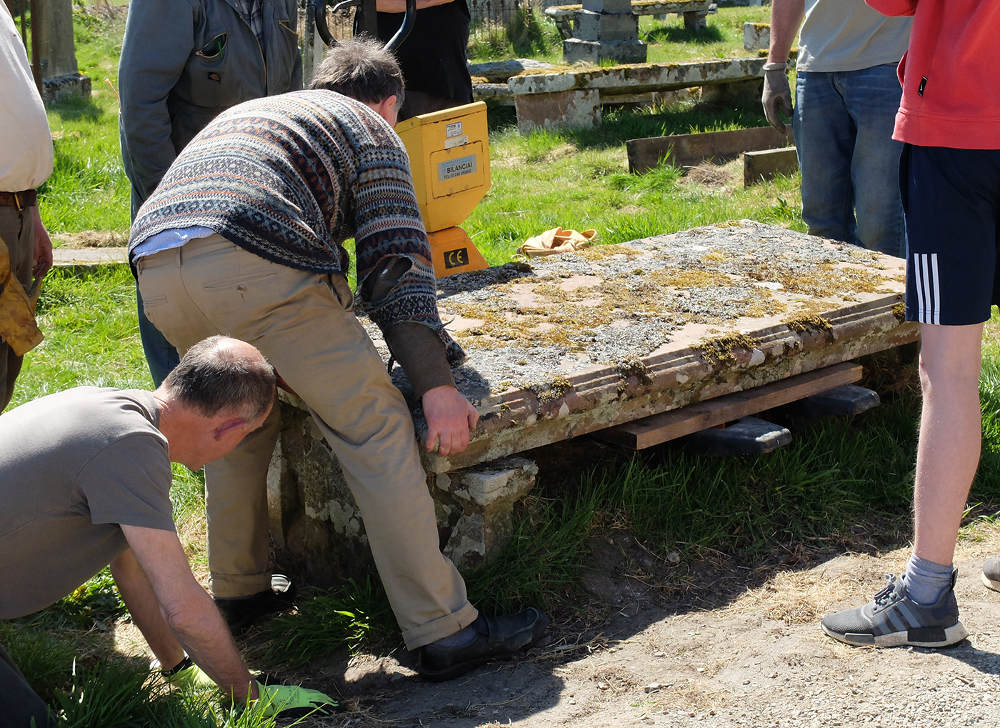 the table is now sitting nicely square on its attractive supports; photo by Andrew Dowsett

This must be one of the most ephemeral families to be recorded in Kirkmichael. Gregor was in Jemimaville for only a few years at most before he returned to Assynt, and Sally was present for less than a year before she died. But Gregor’s memorial to Sally remains as a poignant reminder of their brief association with the parish.